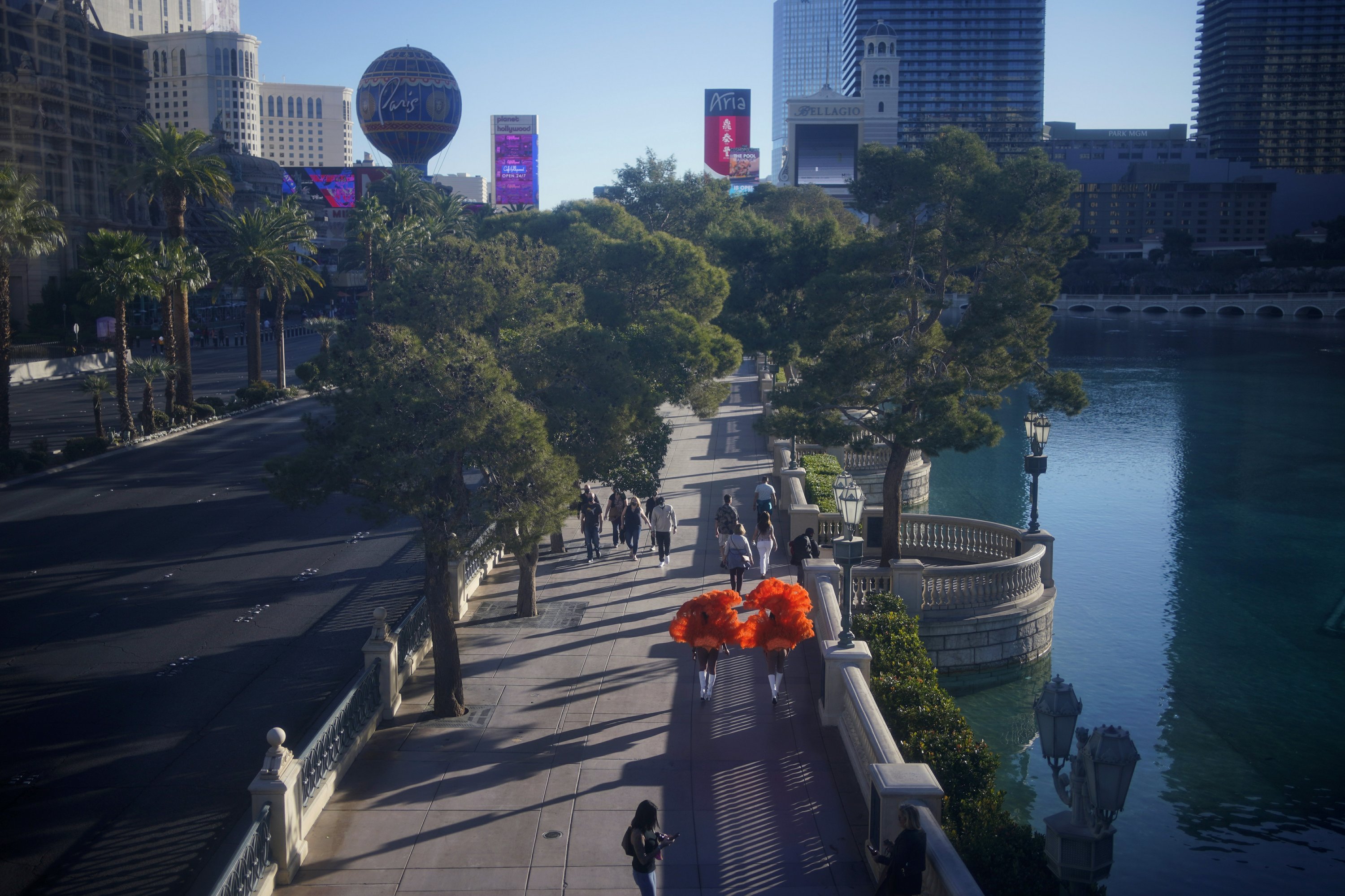 LAS VEGAS — A Las Vegas hospital says it declared a capacity crisis over the weekend, citing a surge of COVID-19 patients that overfilled its intensive care unit.

Hospital spokesman Gordon Absher said Wednesday that patients weren’t turned away and the capacity plan is set to stay in effect until Jan. 22. He told the Las Vegas Review-Journal that two other St. Rose hospitals in the area haven’t issued disaster declarations but also are strained.

U.S. coronavirus deaths hit another one-day high at more than 4,300. Russian President Vladimir Putin has ordered an expansion of the vaccination effort. California has lifted some stay-at-home orders in northern counties, while many orders remain in place where coronavirus cases are surging. Japan has widened its virus emergency for 7 more areas as cases increase.

Indonesia begins a mass COVID-19 vaccination effort. Dutch authorities begin mass coronavirus testing in one town to get an idea of how many people have the new coronavirus variant.

PHOENIX — Leaders of Arizona’s major hospitals say the state is teetering on the brink of having to ration life-saving care as it faces the worst COVID-19 infection rate in the country.

The chief clinical officers of Arizona’s five biggest hospital systems spoke Wednesday at a joint news conference to implore the public and the state to do more.

Under a triage plan, “triage officers” at each hospital would decide which patients receive treatment if there are shortages in staffing, beds or ventilators. The physicians believe at least 1 in 10 people in Arizona is infected with the virus.

Hospital officials also renewed a call for Republican Gov. Doug Ducey to enact a statewide mask mandate and other mitigation measures “based on science and data.”

The Department of Health Services reported 5,629 additional known cases and 191 deaths, increasing the state’s pandemic totals to 641,729 cases and 10,673 deaths. Arizona had the worst diagnosis rate in the past week, with one of every 105 people diagnosed with the coronavirus from Jan. 5 to Tuesday.

CHICAGO — Chicago teachers punished for refusing to show up for the start of in-person classes over COVID-19 concerns have demonstrated outside the home of the school board president.

Roughly 150 school employees have been docked pay and locked out of Chicago Public Schools systems, meaning they can’t teach remotely either as classes began this week for thousands of pre-kindergarten and special education students.

Thousands of pre-kindergarten and special education students were given the option to come back to class this week. Students in kindergarten through eighth grade have the option for two days of in-person instruction next month.

NAIROBI, Kenya — South Africa’s president says a task team under the African Union has secured 270 million doses of COVID-19 vaccines for the African continent, the largest such deal so far for the region.

President Cyril Ramaphosa, the current AU chair, says the doses will come from Pfizer, Johnson & Johnson and AstraZeneca via the Serum Institute of India.

Ramaphosa says at least 50 million of the doses will be available “for the crucial period of April to June” as coronavirus infections surge for a second time in parts of Africa, and all doses will be made available this year.

The 270 million doses are being secured independent of the global COVAX facility aimed at distributing vaccines to lower-income countries. Officials are concerned that the doses secured via COVAX will cover just 20% of Africa’s population, while African officials aim to cover 60% as soon as possible.

Democratic Gov. Gavin Newsom’s announcement on Wednesday puts seniors in line before emergency workers, teachers, childcare providers and food and agriculture workers even as counties complain they already don’t have enough doses to go around.

Health care workers and those in nursing homes and other congregate living facilities can still be vaccinated, but state officials are expanding to people 65 and up because they are at the greatest risk of being hospitalized and dying.

California has seen virus cases and hospitalizations explode since Thanksgiving, though in recent days the numbers have flattened.

SANTA FE, N.M. — State health officials say they have detected the first case of a more contagious variant of COVID-19 in New Mexico.

The state Health Department announced Wednesday that a man in his 60s who traveled to the UK in December has the variant.

Officials described the man’s illness as mild and said no hospitalization was required. They also said at this point, the department has not identified any close contacts within the state.

The variant has spread to multiple counties and several U.S. states since first emerging in September.

BEIRUT — Lebanon’s health minister who is one of the main people leading the fight against coronavirus in the country has been infected with COVID-19.

The St. Georges Hadath Hospital said in a statement Wednesday that minister Hamad Hassan is undergoing treatment adding that he is in good conditions.

Hassan was widely criticized last week when a photo of him circulated having lunch with several other people on the same table during a visit to his hometown of Baalbek in northeast Lebanon.

Hassan said he wore a mask most of the time and that in accordance with rural traditions in Lebanon a person cannot reject an invitation for lunch.

An 11-day curfew will begin Thursday morning in the country, an attempt by the government to limit the spread of the virus. Lebanon, a nation of six million, has registered nearly 232,000 cases and 1,740 deaths.

HUNTSVILLE, Ala. — A top Alabama health leader said the state vaccination hotline was quickly overwhelmed by thousands of callers seeking immunizations during the coronavirus pandemic and “has not worked very well,” but officials are trying to fix the problem.

Dr. Karen Landers, the assistant state health officer, told a news conference on Wednesday that the hotline, run by a contractor, wasn’t able to handle the initial demand when it began operating, despite having 100 lines and 165 workers trained to answer calls. The Department of Public Health previously said the phone number received 1.1 million calls in its first day.

Landers said besides adding additional capacity to the hotline, workers are trying to get an online system in place so people can make reservations for vaccinations without calling.

She said even if the problems are resolved, all the vaccine doses the state has received so far have been spoken for. Additional shipments are needed to fulfill the state’s initial vaccine allotment of 271,000 doses.

The two-week rate of infection per 100,000 inhabitants, which has doubled during the past month, increased to 492 cases on Wednesday. The country has recorded 2.17 million total cases and more than 52,000 confirmed deaths.

Health Minister Salvador Illa says Spain has identified some 100 cases of the virus variant that is possibly more contagious, but the current surge is fueled by social gatherings.

Illa says Spain is improving the rollout of the coronavirus vaccine, with 92,000 doses administered in the past 24 hours. Spain has used just over half of the 1.1 million doses delivered to the country.

LISBON, Portugal — Portugal’s government has ordered the country into a coronavirus lockdown starting Friday, after setting daily records in cases and deaths.

The new lockdown requires working from home and doubles fines for not complying with rules such as wearing masks in public. Schools will remain open. It will allow exceptions so a presidential election can go ahead on Jan. 24.

Portugal has witnessed a record-breaking surge in coronavirus cases since it eased restrictions for the Christmas holiday. Portuguese health authorities on Wednesday reported a record 10,556 confirmed cases and 156 virus-related deaths in 24 hours.

Prime Minister António Costa says the pandemic is “at its most dangerous point” and that optimism from the recent COVID-19 vaccine rollout “encouraged people to drop their guard.”

TRENTON, N.J. — Gov. Phil Murphy says New Jersey residents 65 and older, as well as those from 16 to 64 with serious medical conditions such as cancer, heart and kidney disease, can begin to be vaccinated with the coronavirus shot on Thursday. Murphy says there’s a “strong appetite” for expanding the vaccine among the state’s 71 hospitals, along with guidance from the Trump administration and signals from the incoming Joe Biden White House.

New Jersey has vaccinated 264,000 people out of about 400,000 vaccines initially distributed to the state. So far, 220 of more than 600 nursing homes have completed vaccinations, the governor says. That totals about 28,500 people.

The administration aims to have nearly 5 million people, about 70% of the adult population, vaccinated in six months.

The death toll climbed by 95 overnight, rising to 18,070. The seven-day rolling average of daily new cases in New Jersey rose from 4,476 on Dec. 29 to 6,190 on Tuesday, according to Johns Hopkins University.

ANKARA, Turkey — Turkish authorities have given the go-ahead for the emergency use of the COVID-19 vaccine produced by China’s Sinovac Biotech.

It paves the way for the rollout for Turkey’s vaccination program, starting with health care workers and other high-risk groups.

The health regulatory authority, the Turkish Medicines and Medical Devices Agency, says it had approved the vaccine’s emergency use following examinations that lasted for 14 days.

NEW YORK — Coronavirus deaths in the U.S. have hit another one-day high at more than 4,300.

The nation’s overall death toll from coronavirus has eclipsed 380,000, according to Johns Hopkins University. It is closing in fast on the number of Americans killed in World War II, about 407,000.

The U.S. recorded 4,327 deaths on Tuesday, with Arizona and California among the hardest-hit states.

Deaths have been rising sharply in the past 2 1/2 months, and the country is in the most lethal phase of the outbreak yet, even as the vaccine is rolled out. New cases are running at nearly a quarter-million per day on average. More than 9.3 million Americans have received their first shot of the vaccine.

ROME — Italy has added another 507 coronavirus deaths, bringing the death toll to more than 80,000 as the government plans to tighten restrictions.

Health Minister Roberto Speranza told Parliament the government is planning to prohibit travel between regions, even with the lowest rates of contagion, given “the epidemic is once again in an expanding phase.”

Some restrictions were imposed during the Christmas holidays and will be extended.

Italy has witnessed a prolonged resurgence this winter, with daily infections remaining in the 10,000-to-20,000 range for weeks despite mask mandates, nighttime bar and restaurant closures and other restrictions. On Wednesday, the new confirmed daily caseload was 15,774.

MADISON, Wis. — Wisconsin health officials say a new, possibly more contagious form of the coronavirus has been detected in the state.

The Department of Health Services announced the variant was detected through routine genome sequencing of specimens collected during testing. The department didn’t say where it was found or when it was confirmed. An agency spokeswoman didn’t immediately respond to an email.

The variant form of the virus was first discovered in England in November and December. It’s since turned up in Colorado, California, Florida, Minnesota, New York and Georgia.

Health officials have said the variant is more easily transmissible but isn’t any deadlier and vaccines should be effective against it.