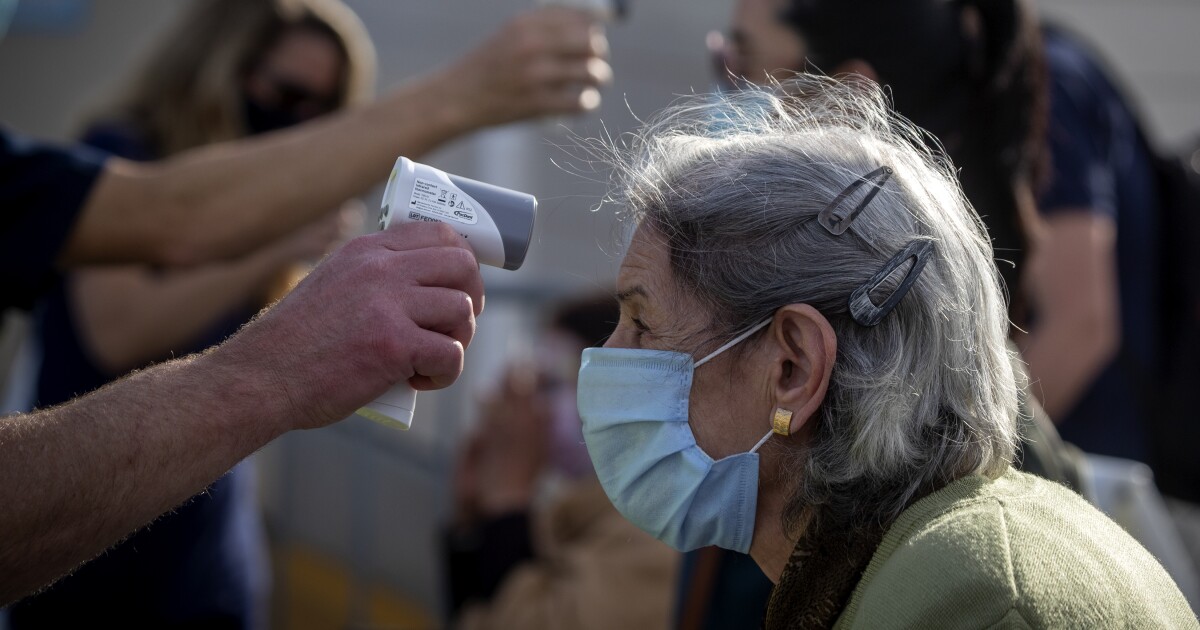 The rollout of the coronavirus vaccine to people 65 and over in California has been marked by confusion, with some counties moving faster than others.

Some counties are beginning to offer the vaccine to older residents. But others, including Los Angeles County, say they need to finish giving shots to first responders and medical workers first.

In Northern California, some counties are beginning by offering vaccines to people 75 and over first and then moving to people 65 and older.

Here are some details:

According to the L.A. County Public Health Department, the county is still in Phase 1A of the vaccine rollout, which means only healthcare workers and residents of skilled nursing and long-term care facilities are eligible to receive the vaccine.

The department said the county is working to provide another 500,000 doses to people in the Phase 1A group by the end of the month, and hopes to move to Phase 1B — those 65 and over — at the beginning of February.

County health offices have been bombarded by phone calls from residents confused by the mixed messages from state and local officials. Gov. Gavin Newsom, in an announcement Wednesday, said people 65 and older could get vaccinated, but local health officials followed with public statements soon after saying the opposite.

The county estimates that everyone in Phase 1B will be offered at least one dose of the vaccine by late March.

Phase 1C, which includes people ages 50 to 64, and people 16 to 49 with underlying health conditions or who work in certain essential jobs, is estimated to begin in March. Everyone in that phase should receive at least one dose by early May.

Phase 2, which includes all people ages 16 to 49, is estimated to begin by mid-May or early June.

In the city of Long Beach, which has its own public health department, officials said they will begin offering vaccinations to people over 65 beginning Saturday.

As Orange County residents 65 and older furiously book appointments to receive COVID-19 vaccinations at a new distribution center that opened Wednesday at Disneyland in Anaheim, plans are already in the works to bring additional distribution centers online.

Officials have not yet settled on the locations of those vaccination centers, known as super PODs”(points of distribution), but Costa Mesa Mayor Katrina Foley suggested in a virtual town hall on Facebook on Thursday that the Orange County Fairgrounds could be among them.

“I know the cat’s already out of the bag that we’re going to eventually have a site at the fairgrounds,” Foley said in the forum, where she and Assemblywoman Cottie Petrie-Norris (D-Laguna Beach) provided an update on the county’s COVID-19 response.

Operation Independence seeks to vaccinate the bulk of Orange County residents by July 4.

Fire Authority Division Chief Mike Pietro, who is leading the operation alongside Health Care Agency Deputy Director Margaret Bredehoft, confirmed at a news conference Wednesday that, in addition to the Disneyland site, another four distribution centers were being planned throughout Orange County.

“As those site agreements are finalized, and as staffing is secured and we get more vaccine, those super POD sites will go online,” Pietro said, declining to state when they might be operational.

San Diego County health systems are dealing with overwhelming demand for the vaccine.

UC San Diego Health began immunizing older patients on Thursday, beginning a new phase in the region’s vaccine rollout. Members of the health system who are 65 or older are being contacted to schedule appointments, according to a statement from UCSD.

“Patients are asked to wait for their vaccination invitations to avoid overwhelming phone lines and to accommodate ongoing services and care …. Eligible patients will be contacted as soon as possible, based on availability of vaccine.”

UCSD plans to start out immunizing 500 patients a day. Those doses will mainly go to patients whose medical histories make them especially vulnerable to COVID-19. UCSD did not specify which preexisting conditions would be considered, but the Centers for Disease Control and Prevention notes that there’s strong evidence that cancer and various forms of lung, kidney and heart disease increase a person’s risk for COVID-19 hospitalization and death.

Diabetes, high blood pressure and obesity are also risk factors, according to Dr. Davey Smith, UCSD’s director of infectious disease. So is age. About 15% of San Diego County residents 80 and older who’ve gotten COVID-19 have died — more than one in seven.

The U.S. Department of Veterans Affairs’ San Diego Healthcare System, which serves more than 86,000 vets, began immunizing patients Wednesday, according to a spokesperson. The San Diego VA is starting with patients 85 and older until it receives more doses.

The nation’s two largest retail pharmacy chains, CVS and Walgreens, have yet to begin vaccinating older Californians, with the exception of those in nursing homes. But the Ralphs grocery chain, which has 77 pharmacies throughout Southern California, started this week; San Diegans 65 and up can schedule appointments online at their nearest location.

If you don’t see an option to sign up, that’s because slots are filling up fast, according to a Ralphs spokesperson, who added that the company’s website started crashing late Wednesday due to a surge in traffic.

The county plans to continue to focus on inoculating healthcare workers at its mass vaccination site near Petco Park until the week of Jan. 25, according to public health officer Dr. Wilma Wooten. At that point, Wooten says, those 65 and up will be able to get vaccinated at county immunization sites. Essential workers such as teachers, police officers and grocery store workers could follow in February. The county plans to launch an online system next week for people who want to get alerts on when and where they can get vaccinated.

Riverside County has opened vaccines to residents 65 and older, according to their public health department.

Some of those who would be at the front of the line in phases as outlined by the state:

Sorgente articolo:
When can I get the COVID vaccine? Where you live may matter – Los Angeles Times