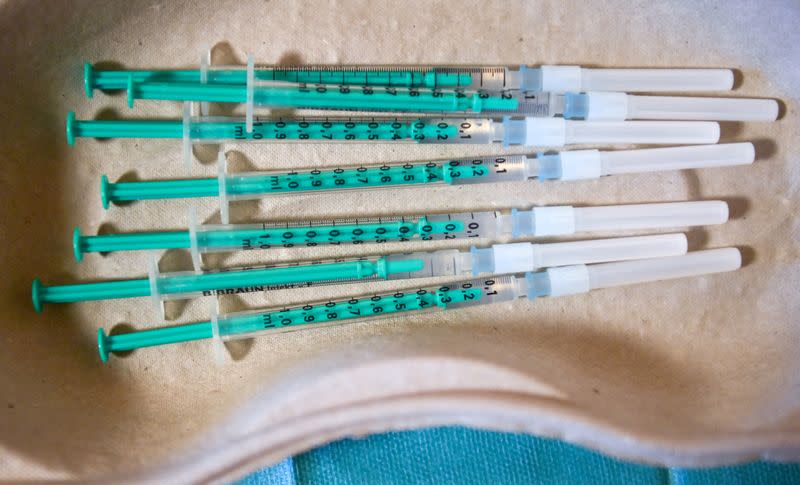 BUCHAREST/PRAGUE/SOFIA (Reuters) – Pfizer has slashed in half the volume of COVID-19 vaccines it will deliver to some EU countries this week, government officials said on Thursday, as frustration over the U.S. drugmaker’s unexpected cut in supplies grows.

Romania got only 50% of its planned volume for this week, the other half being allocated gradually by the end of March, with deliveries returning to normal starting next week, Deputy Health Minister Andrei Baciu told Reuters.

It was a similar situation in Poland which on Monday received 176,000 doses, a drop of around 50% from what was expected, authorities said.

The Czech government was bracing for the disruption to last weeks, slowing its vaccination campaign just as second doses get under way.

“We have to expect that there will be a reduction in the number of open vaccination appointments in the following three weeks,” Health Minister Jan Blatny told reporters, with Pfizer deliveries falling by about 15% this week and as much as 30% for the following two weeks.

Pfizer and its German partner BioNTech have declined to comment on the cuts beyond their statement last week, which announced cuts to deliveries as they ramp up manufacturing in Europe.

Some countries reckon they can handle it. Norway has an emergency stockpile and will continue administering doses as planned, the government’s public health body said.

The U.S. drugmaker has told Bulgaria and Poland it will replace missing doses, top officials said.

But Denmark’s Serum Institute said its 50% loss of shots this week would lead to a 10% shortfall for the first quarter.

Italy, meanwhile, is threatening legal action against Pfizer, with COVID-19 special commissioner Domenico Arcuri saying on Thursday that the country has been told to expect a 20% cut next week after reducing this week’s supply by almost 30%

With governments across the region still reeling from the surprise cuts, officials say the reductions are undermining their efforts to inoculate their citizens and tame the pandemic which has killed more than 2 million people.

Adding to the upheaval are worries about supplies of special syringes needed to extract six doses from each vial of Pfizer’s shot.

Europe’s disease surveillance agency warned on Thursday that three variants of the coronavirus that emerged in Britain, South Africa and Brazil will lead to more COVID-19 infections, hospitalisations and deaths.

In Hungary, where the authorities gave the go ahead for the use of Britain’s AstraZeneca and Russia’s Sputnik V vaccines ahead of the EU drug regulator, a senior official called on Brussels to try and ensure deliveries from Pfizer and other vaccine makers would stick to schedule.

“We would be happy if the (European) Commission could take steps as soon as possible to ensure that Pfizer and other manufacturers would change deliveries,” Prime Minister Viktor Orban’s chief of staff Gergely Gulyas said.

The problem has spread to countries outside the trading bloc too – Canada is facing delays as is Switzerland, where the mountain canton of Grisons got only 1,000 shots from Pfizer this week, far short of the 3,000 it had been anticipating.

Sorgente articolo:
Pfizer cuts vaccine deliveries by as much as half to some EU countries – Yahoo News