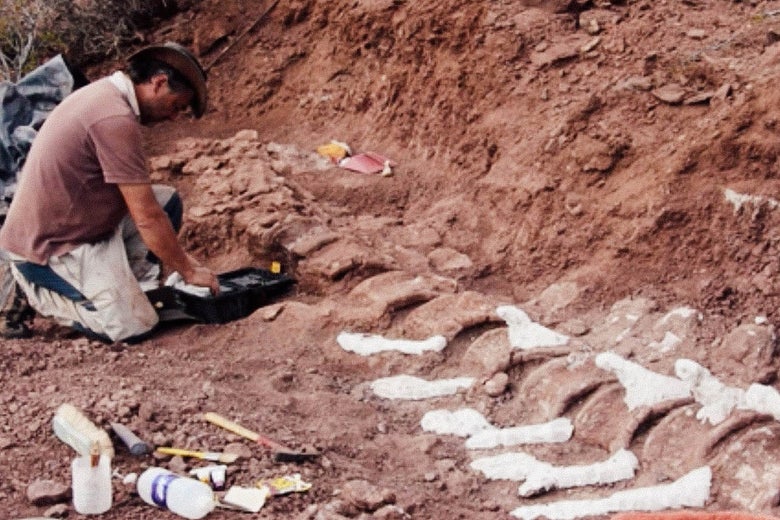 Huge dinosaur alert! From the journal Cretaceous Research, which I read regularly for the mollusk science and not just when someone finds an absolutely epic dino-boi in Argentina (bolding below is mine, and please click here to learn about the etymology of the term boi):

In this contribution we present a giant titanosaur sauropod from the Candeleros Formation (Cenomanian, circa 98 Ma) of Neuquén Province, composed of an articulated sequence of 20 most anterior plus 4 posterior caudal vertebrae and several appendicular bones. This specimen clearly proves the presence of a second taxon from Candeleros Formation, in addition to Andesaurus, and is here considered one of the largest sauropods ever found, probably exceeding Patagotitan in size.

Much respect, because Patagotitan was big as hell! Figuring out how long and heavy dinosaurs were requires a good deal of extrapolation because fossils tend not to be totally complete and don’t, you know, include skin and intestines and stuff. But one 2017 paper argued, based on a deposit of bones originally discovered by a ranch hand, that Patagotitan was “the largest known dinosaur species” and may have weighed as much as 85 tons. So if this new sample, which has not been assigned a species, is bigger, then it was really mondo large. (A 122-foot-long, 28-foot-tall life-size model of the Patagotitan stands in the main hall of the Field Museum in Chicago. Imagine something bigger than that! Wow!)

The new dino’s fossils are an estimated 98 million years old. The rock of Patagonia’s Candeleros Formation preserves a variety of fauna that lived in an area of rivers and swamps.

RIP to the big dinosaur who was hanging out in some mud and such 98 million years ago. You were very big; it rules, how big you were. Nice job!

Sorgente articolo:
RIP to This Huge Gigantic Dinosaur Who Was Chilling in Some Mud – Slate