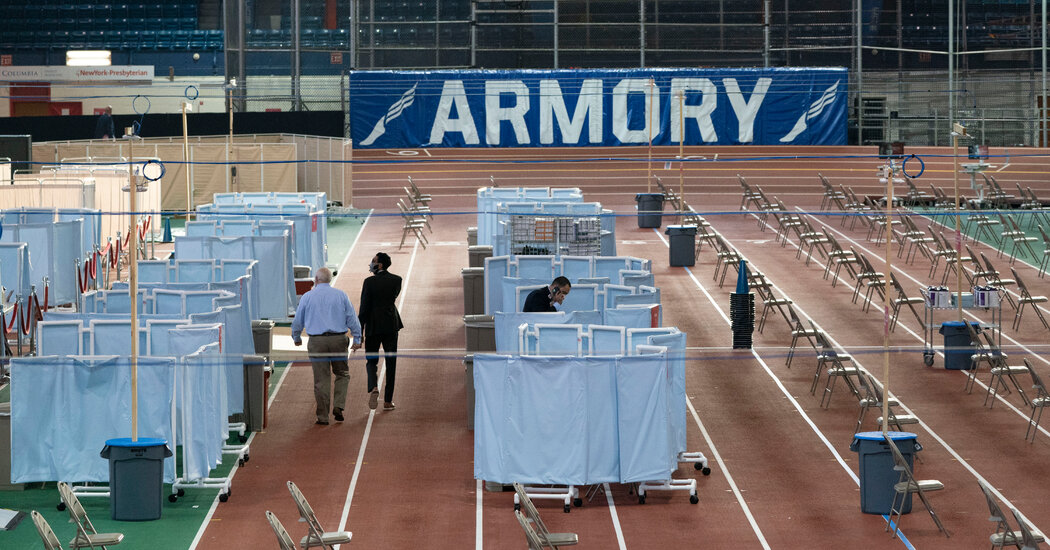 The rollout of vaccines in New York City — once the epicenter of the pandemic — has been plagued by stark racial disparities, with Black and Latino residents receiving far fewer doses than white residents, Mayor Bill de Blasio announced on Sunday.

The city’s demographic data was incomplete, but the information available revealed for the first time that white New Yorkers are navigating the city’s complicated vaccination system more easily.

The disparities were even more striking among city residents aged 65 and up: Only 9 percent of the roughly 125,000 older New Yorkers vaccinated were Black.

Mr. de Blasio, a Democrat in his second term, said he was frustrated that New Yorkers in communities of color that were hardest-hit by the pandemic were not getting vaccinated. He pledged to address the problem by improving the appointment scheduling system and increasing outreach in more languages.

“Clearly we do see a profound disparity that needs to be addressed aggressively and creatively,” Mr. de Blasio said at a news conference.

“This is a moral and management failure of the highest order,” said Mr. Stringer, who is running for mayor.

They called on Mr. de Blasio to stop vaccinating people who live outside the city, to fix the confusing scheduling websites and to provide paid time off for essential workers to get vaccinated.

In New York City, about 600,000 people have received a first dose of the vaccine since mid-December. Mr. de Blasio has repeatedly said that the city is running out of doses and cannot accelerate the rollout without a greater supply. The city had only about 53,000 first doses left on Sunday.

Mr. de Blasio said the best way to address racial disparities was to increase the city’s supply so that more New Yorkers are getting the vaccine and officials can “gain trust organically” among residents who are reluctant to get the shot.

“I honestly believe that’s the single best cure to this problem,” he said. The mayor has set a goal of having five million New Yorkers vaccinated by June.

The city’s demographic data is imperfect — the mayor said many people did not provide their race, and some health providers did not properly collect it. The race of about 263,000 people who received at least one dose of the vaccine was not known.

But for those who did provide their information, white residents, who make up about 32 percent of the city’s population, were overrepresented. Asians were represented at about their share of the city population: About 14 percent of New York City residents are Asian, and 15 percent of vaccine recipients were.

New Yorkers have complained about the complex system for scheduling an appointment and long wait times on phone lines. Younger people have been helping older relatives secure an appointment, and some appointments have been canceled as the city’s supply dropped.

Currently more than 150 million people — almost half the population — are eligible to be vaccinated. But each state makes the final decision about who goes first. The nation’s 21 million health care workers and three million residents of long-term care facilities were the first to qualify. In mid-January, federal officials urged all states to open up eligibility to everyone 65 and older and to adults of any age with medical conditions that put them at high risk of becoming seriously ill or dying from Covid-19. Adults in the general population are at the back of the line. If federal and state health officials can clear up bottlenecks in vaccine distribution, everyone 16 and older will become eligible as early as this spring or early summer. The vaccine hasn’t been approved in children, although studies are underway. It may be months before a vaccine is available for anyone under the age of 16. Go to your state health website for up-to-date information on vaccination policies in your area

You should not have to pay anything out of pocket to get the vaccine, although you will be asked for insurance information. If you don’t have insurance, you should still be given the vaccine at no charge. Congress passed legislation this spring that bars insurers from applying any cost sharing, such as a co-payment or deductible. It layered on additional protections barring pharmacies, doctors and hospitals from billing patients, including those who are uninsured. Even so, health experts do worry that patients might stumble into loopholes that leave them vulnerable to surprise bills. This could happen to those who are charged a doctor visit fee along with their vaccine, or Americans who have certain types of health coverage that do not fall under the new rules. If you get your vaccine from a doctor’s office or urgent care clinic, talk to them about potential hidden charges. To be sure you won’t get a surprise bill, the best bet is to get your vaccine at a health department vaccination site or a local pharmacy once the shots become more widely available.

That is to be determined. It’s possible that Covid-19 vaccinations will become an annual event, just like the flu shot. Or it may be that the benefits of the vaccine last longer than a year. We have to wait to see how durable the protection from the vaccines is. To determine this, researchers are going to be tracking vaccinated people to look for “breakthrough cases” — those people who get sick with Covid-19 despite vaccination. That is a sign of weakening protection and will give researchers clues about how long the vaccine lasts. They will also be monitoring levels of antibodies and T cells in the blood of vaccinated people to determine whether and when a booster shot might be needed. It’s conceivable that people may need boosters every few months, once a year or only every few years. It’s just a matter of waiting for the data.

The mayor said the city would eventually release additional data by ZIP code to give a better picture of who is getting vaccinated.

After The City reported on one vaccination site in Manhattan where too many outsiders were receiving doses, the health network that runs the site agreed last week to prioritize residents from the local community and to give new vaccine slots only to New Yorkers.

Mr. de Blasio said that the problems at the site, the Armory Vaccination Center in Washington Heights — where nearly 70 percent of residents are Latino — were the “exact opposite of what we need.”

“If a site is in a community, particularly a community hard hit by Covid, it should be all about reaching out to that community and bringing people in,” Mr. de Blasio said last week.

Mark Levine, a city councilman who chairs the Council’s health committee, has called for several measures to close what he called the “vaccine equity gap,” including giving residents of local ZIP codes scheduling priority in communities of color.

“We need to take action now to fix yet another egregious case of inequity in this pandemic,” Mr. Levine said.

Several other candidates running to replace Mr. de Blasio as mayor criticized the vaccination efforts. Andrew Yang, the former presidential candidate, said the data was “a scathing indictment of how broken the system is.”

Eric Adams, the Brooklyn borough president, said the city’s response to the virus “has turned into our Katrina” — a reference to the hurricane that hit New Orleans in 2005 and overwhelmingly harmed Black residents.

“We know who is most at risk and who is suffering the most — and they are mostly Black and brown,” he said. “They have been abandoned and they are dying because of it. That must end today.”