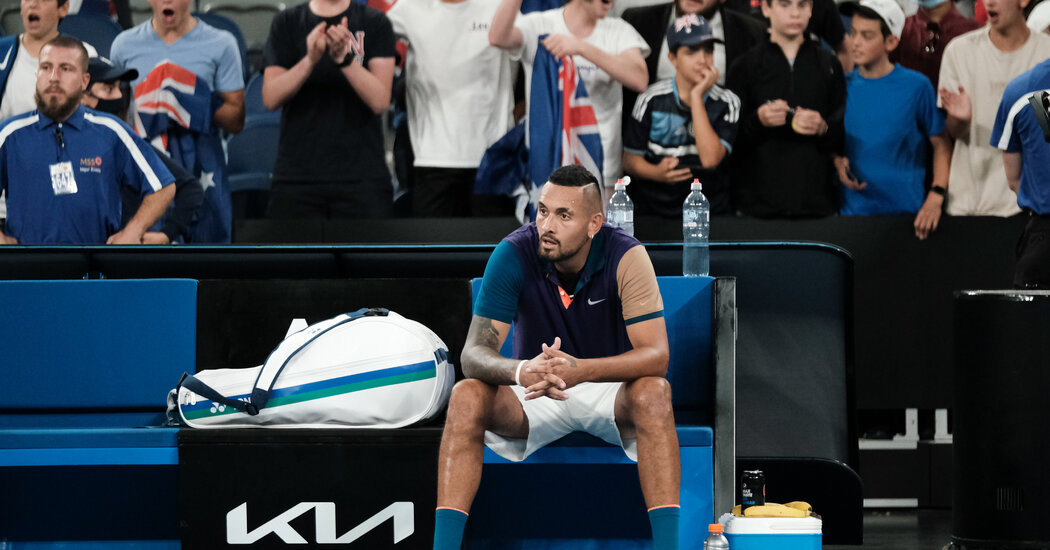 MELBOURNE, Australia — Novak Djokovic’s flat verbal volley was catnip for Nick Kyrgios, who gleefully blasted a return. “Bang,” he muttered under his breath, “Nailed him.”

Kyrgios made his point at an Australian Open news conference, not on the court, where he last faced Djokovic in 2017. Over months and across time zones, the men have engaged in what amounts to the longest rally of the season, a seesaw of snark that has captivated an audience drawn to the catty Real Housewives of Melbourne vibe.

The ball was back in Kyrgios’s court on Wednesday, but he was too exhausted after his electrifying five-set comeback victory over the 29th-seeded Frenchman, Ugo Humbert, to take another swipe at Djokovic, who is also through to Friday’s third round.

Any other year, a war of words between the two would be as riveting as a plastic knife fight. Djokovic is the eight-time defending champion and the men’s world No. 1 who next month will tie (and probably pass) Roger Federer’s record of 310 weeks at the top.

Kyrgios is ranked 47th, with six career ATP titles. He has never advanced past the quarterfinals in a Grand Slam event and has been known more for his meltdowns than any milestones. Kyrgios’s victory against Humbert offered a three-hour tour of his jagged internal terrain; the brilliant shots and the bellicose storms that left in their trail one smashed racket, two code violations and an earful of expletives.

“If you were inside my head, there were some dark thoughts in there,” Kyrgios conceded.

Any other year, even at his home Slam, Kyrgios, a Canberra native, would be the tantrum-thrower in the cereal aisle that all the adults gave a wide berth. But this is the first Australian Open played since the coronavirus pandemic halted sports and shut schools, displaced workers and residents and closed state and international borders.

Kyrgios, 25, who has a residence in the Bahamas, idled at his family home in Australia’s capital during the five-month coronavirus-imposed halt to competition. His exposure to Australia’s rigorous one-for-all, all-for-one approach to the pandemic, one that embraced social distancing, masks and hand-washing but also testing, contact tracing, limited interstate travel, curfews and confinement, broadened his perspective beyond elite sport’s I-for-me, me-for-I mantra.

Tennis’s bad boy became its social media Bard, giving voice to the hardships he saw all around him. He helped where he could, be it raising money for bushfire survivors or buying and distributing food to the housebound in his hometown.

On the other side of the world, tennis’s reigning king was looking out for his community, too. Djokovic, 33, was hunkered down in Serbia, one of the European countries lightly impacted by the pandemic. Djokovic, a millionaire many times over, recognized the financial hardships faced by lower-ranked players, which he sought to ameliorate by organizing, and headlining, a two-week, four-city Balkans exhibition tour in June.

Serbia’s lockdown had been lifted, but the lack of social distancing during the events, which attracted large crowds, and the photos that emerged of shirtless tennis stars dancing the night away in clubs, offended players who were lonely and locked down in their homes. When three coaches, two wives and four players, including Djokovic, tested positive for the coronavirus, leading to the cancellation of the event, the backlash was swift.

Leading the verbal attack was Kyrgios, who decried the tour as a “bonehead decision” and suggested that Djokovic, as the game’s top player, needed to be held accountable for his actions.

When the ATP season resumed in August Kyrgios opted out because he didn’t want to travel. And so it wasn’t until last month, when Djokovic arrived in Australia and began a mandatory 14-day quarantine that Kyrgios’s bubble and Djokovic’s bubble collided in full view of Australian journalists badly in need of a frothy diversion.

Djokovic, who had resigned as president of the ATP Player Council last summer to help start what he described as a complementary players’ organization, was on a text string with dozens of players who detailed their quarantine woes.

Gathering their complaints, Djokovic sent Craig Tiley, the Tennis Australia CEO, a list that reflected the requests, which included easing the quarantine period and access to private homes with tennis courts, similar to what was available to players at their own expense in New York during last year’s United States Open.

“I offered to help with my position, my status, my name, with my connection to Craig, this group of over 100 players who were communicating on a daily basis what are the things they were missing,” Djokovic said this week.

Djokovic’s missive, which he said was intended for Tiley’s eyes only, was leaked, and Kyrgios called Djokovic out for not appreciating sacrifices made by the Australian public that made the tournament possible.

An Australian reporter asked Djokovic for his reaction. He said that Kyrgios, whom he described as “someone that is different,” is good for the sport.

He added that he appreciates Kyrgios’s “big game” but that off the court, he doesn’t have much regard for him. Like courier pigeons, Australian news media members carried a Twitter-length version of Djokovic’s message to Kyrgios.

“He says he has no respect for you,” a reporter said. “Would you like to say anything?”

“He’s a very strange cat, Novak is,” Kyrgios said. “Heck of a tennis player but unfortunately someone that is partying with his shirt off during a global pandemic, I don’t know if I can take any slack from that man.”

In Djokovic’s next news conference, Kyrgios’s words were read to him word for word. “Great,” Djokovic replied dismissively.

The next shot could be delivered on the court. They could meet in the semifinals, where their distinct playing styles reflect their personalities. Kyrgios is aggressive, impulsive and, as befits someone who’s easily distracted, armed with a game built for short points.

Djokovic has a cartographer’s zeal for precision and discipline. He accepts suffering as the path to enlightenment and is a doggedly earnest defender deft at attacking from seemingly untenable positions.

In their verbal exchanges, Djokovic goes on the defensive while Kyrgios bats each barb back like a between-his-legs half-volley.

Djokovic can’t win for winning; his 17 Grand Slam singles titles are the third-most in men’s history behind Rafael Nadal and Federer, who both have 20, and yet he travels the world like the third wheel in the public’s two-man love affair.

And Kyrgios can’t win for losing. In the second round, he said, he was able to stave off a match point to win the fourth set and then take the fifth because he imagined the headlines had he lost, “almost afraid,” he said, to “take all that negativity in.”

Are Djokovic and Kyrgios really so different?

Each spent part of Thursday in the Melbourne Park rooting for compatriots. Djokovic cheered Olga Danilovic, whom he is mentoring. Kyrgios watched his doubles partner Thanasi Kokkinakis.

Djokovic could have been speaking for both of them when he said he’s never been “the guy who wants to fit in the box.”

It’s not hard to picture Kyrgios with his racket raised, applauding him.