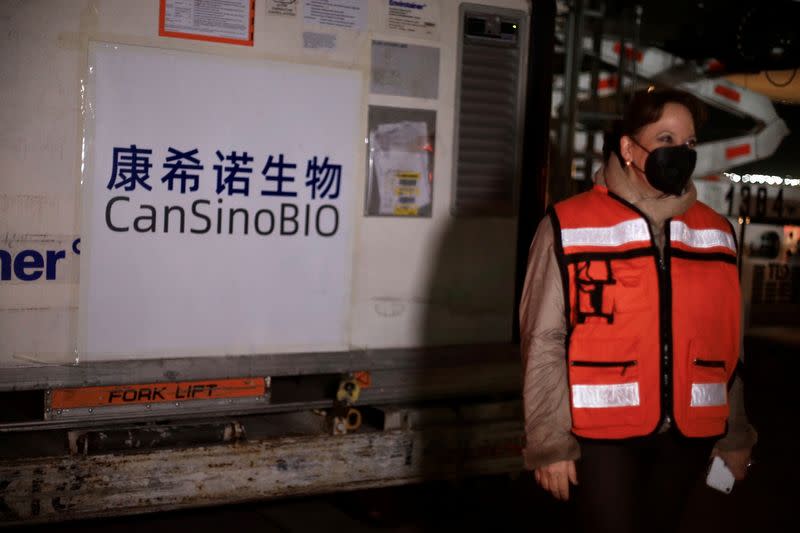 MEXICO CITY (Reuters) – Mexico received its biggest COVID-19 vaccine shipment yet on Thursday, in the form of the active ingredient for 2 million doses of China’s CanSino shot, a relief for the Latin American country after slow delivery on orders from Western companies.

Mexico has inked a deal with CanSino for at least 8 million doses to be delivered between February and March. Its health regulator granted authorization for the vaccine’s emergency use on Wednesday, helping drive CanSino shares to record highs.

The situation is urgent in Latin America’s No. 2 economy, with the world’s third highest coronavirus death toll at 169,760, according to government data. The real tally is believed to be much higher.

Mexico also has a deal for 24 million doses of the Russian Sputnik V vaccine, in one of its larger agreements.

It was unclear whether Mexico would begin to distribute CanSino’s vaccine, which will be packaged in the central state of Queretero, before it begins administering doses of AstraZeneca, which it is also packaging locally, in addition to importing 2 million doses from India.

The CanSino shipment far outweighs Mexico’s other expected deliveries, including the 870,000 doses of AstraZeneca expected from India this month, according to data from the foreign ministry.

CanSino conducted phase III trials in Mexico with 14,425 participants. Mexico had said it was one of the world’s largest COVID-19 clinical trials.

Pakistan said earlier this week that CanSino’s vaccine showed 65.7% efficacy in preventing symptomatic cases and a 90.98% success rate in stopping severe disease, according to an interim analysis of global trials.

Mexico had been relying on the Pfizer vaccine for weekly deliveries of some 400,000 doses before shipments were delayed due to demand by the World Health Organization (WHO) for inclusion in the COVAX program.

Mexico pre-purchased 51.5 million vaccine doses through COVAX, though shipments have yet to begin.