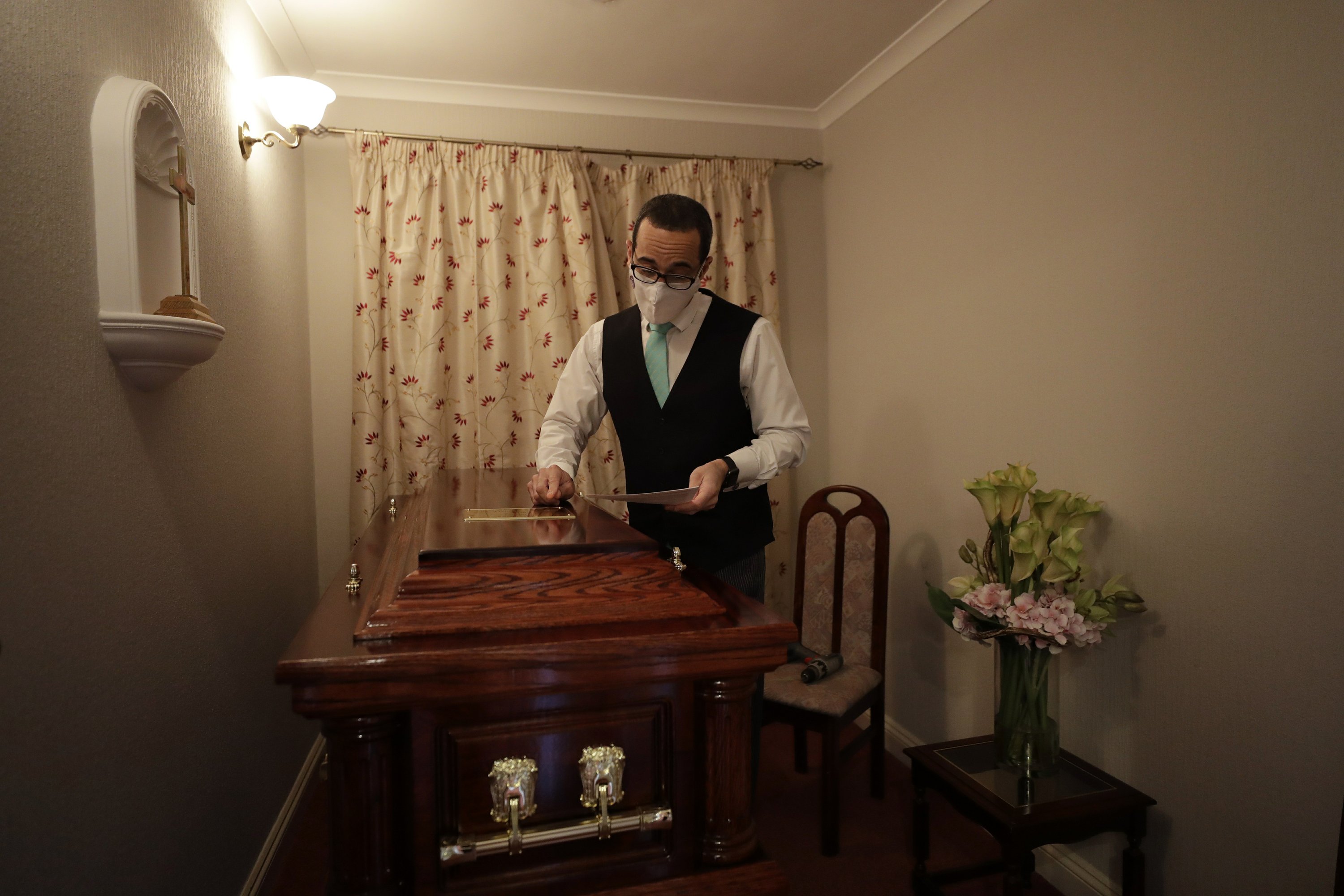 LONDON (AP) — Funeral director Hasina Zaman recently helped a family say goodbye to a young man in his 30s who had died from COVID-19, on the same day she was planning a service for a husband and wife, both also lost to the virus.

Since the pandemic struck, Zaman’s phone has rarely stopped ringing, with bereaved people seeking help that she is not always able to provide.

“Every week I think I don’t have what it takes,” said Zaman, whose company Compassionate Funerals serves a multicultural, multi-faith community in east London. The small firm normally arranges about five funerals a week, but COVID-19 has driven the number as high as 20.

“We just do it,” Zaman said. “Literally just hands-on approach and just go for it and do it. And it’s not sustainable. It’s definitely not sustainable, because it’s not healthy.”

Funeral home staff are under pressure in many places, but the burden is especially intense in Britain, where more than 115,000 people with the virus have died, one of the highest per capita death tolls in the world. Undertakers, embalmers and others who deal with death for a living often regard the pressure on them as less important than the pain felt by bereaved families. But many are exhausted by the sheer amount of mortality they have faced, and the pandemic is increasing awareness that their own mental health also deserves tending to.

Funeral directors across the country describe a heavy burden from more services, tougher hygiene measures and fewer staff because of illness and self-isolation requirements.

“Some days it is relentless and is really difficult, particularly if we have younger people who’ve died,” she said. “Sometimes it really does get a bit too much.”

Heritage & Sons’ parent company says its group of funeral homes across southeast England is arranging 30% to 50% more funerals than in a typical year. Ben Blunt, a senior funeral director at Heritage & Sons, says this winter’s surge — which saw Britain record more than 30,000 coronavirus deaths in January alone, though cases and deaths are now falling — has been even worse than the peak last spring.

“In the first lockdown, we kind of didn’t know what to expect,” he said. “But having had the experience first time around and now going through it for a second time, there is that sort of slight dread, that we almost know what’s on the horizon.”

Alison Crake was better prepared for the pandemic than most. Before anyone had ever heard of COVID-19, she wrote a guide about how to plan for a pandemic for Britain’s National Association of Funeral Directors. Crake anticipated some of the stresses a pandemic could bring, including staff absences, a shortage of mortuary space and the need to procure extra protective equipment.

But she says that if anyone had described the scale of death and disruption to come, “I probably would have gasped at the thought of it.”

Crake, who runs her family’s funeral firm in northeast England, says the profession has been shaken by shuttered places of worship, strict limits on attendance at funerals and other restrictions to slow the spread of the virus which mean funeral staff can’t always give grieving families the comfort they crave.

Speaking sensitively to a bereaved family over Zoom is a new and delicate skill that funeral directors have had to learn. Blunt says it’s painful not to be able to do something as simple as shake a client’s hand.

“We’re professionals,” he said. “But we’re human beings as well.”

Still, Crake says funeral staff, who often regard their profession as a calling, can be reluctant to seek help — though some in the industry are trying to change that. The guide she wrote was updated in October with a greater emphasis on providing emotional support for employees. Those who are struggling can call Our Frontline, a service set up during the pandemic, partially funded by Prince William and his wife Catherine’s Royal Foundation, that offers mental health support around the clock to key workers. Funeral staff have been included in that category, alongside medics and emergency services personnel.

“We understand that this is the profession that we’ve chosen,” Crake said. “And for many of us, we see it as vocational. We consider ourselves to be part of our community and our community is part of us. But equally, there is a need to get that balance to make sure that this prolonged exposure to trauma doesn’t result in compassion fatigue.”

Conservative lawmaker John Hayes, who heads a parliamentary group on funerals and bereavement, recently paid tribute to the “quiet dignity” of funeral workers during the pandemic, saying their essential work “often goes unnoticed by those in the corridors of power.”

Zaman is anguished at the restrictions on travel and assembly that mean families often can’t grieve together. One recent weekday, mourners stood in the rain outside her parlor, taking turns to enter for socially distanced prayers over the coffin of a young man who had died far from his homeland of Gambia. A eulogy was delivered on the sidewalk over the rumble of cars and buses.

But she is proud of how the profession has adapted since the first surge of the outbreak. Livestreaming allows friends and family to watch funerals from afar. Thanks to training and protective equipment, she can let Muslim clients wash and shroud their loved ones’ bodies before burial, in line with Islamic practice.

Zaman says when families can have that connection and catharsis, “you feel a sense of achievement” that makes the stress worthwhile.

“I am exhausted,” she said. “For sure. But I look after myself. … I recover. I’ve got 10 hours to recover after work and during the nighttime, and then I come back here and carry on.”