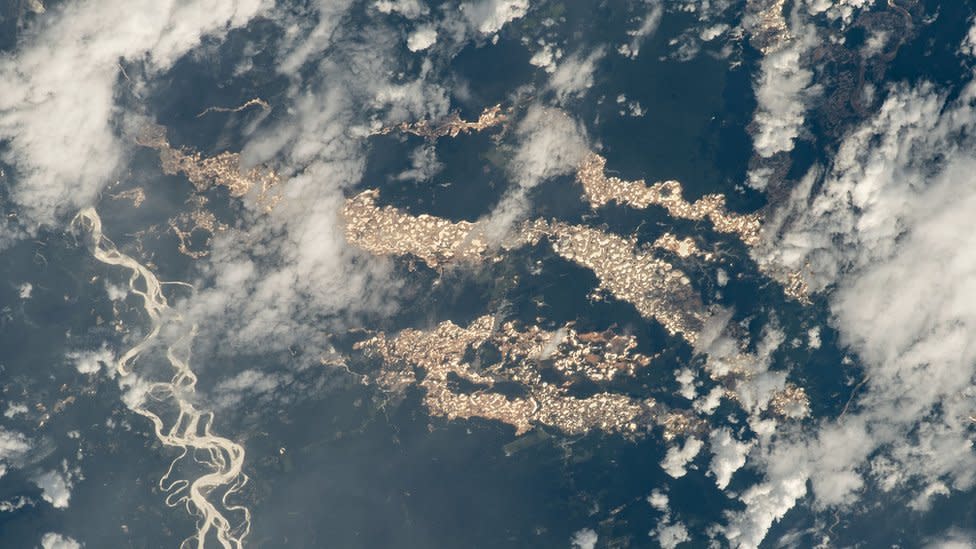 Stunning rare photographs published by Nasa have revealed the extent of gold mining – much of it thought to be illegal – in Peru’s Amazon rainforest.

The “rivers of gold” captured in the images are actually pits believed to have been dug by unlicensed miners, the space agency says.

The pits, usually hidden from view, were illuminated by reflected sunlight.

An astronaut on the International Space Station (ISS) captured the unusual photographs in December.

The images are further evidence of the scale of destructive gold mining in the Madre de Dios region in south-eastern Peru.

The country is a leading exporter of gold, and Madre de Dios is home to a huge unregulated industry with thousands of miners trying to make a living.

The area is a biodiversity hotspot and the extractive industry has led to extensive deforestation and destruction of vital habitats.

The mining is also poisoning local communities as tonnes of mercury is used to extract the prized commodity and scientists say a significant amount is released into rivers or the atmosphere.

The pits where miners are searching for gold appear as hundreds of basins filled with water, surrounded by mud where vegetation has been removed, Nasa explains.

Miners follow the routes of old rivers where sediments, including minerals, were deposited.

In parts of the region, which is home to species including monkeys, jaguars and butterflies, scientists believe that mining is the lead cause of deforestation.

In January 2019, a study found that gold mining deforestation destroyed an estimated 22,930 acres of Peru’s Amazon in 2018, according to the group Monitoring of the Andean Amazon Project.

Buoyed by the rising price of gold, people from local communities that are often deprived see an opportunity to make a living from mining. In 2012, there were an estimated 30,000 small-scale miners working in the lush region.

In another part of Peru, La Pampa, a huge gold rush that lasted close to a decade was finally halted by the government in 2019 when around 5,000 miners were expelled.