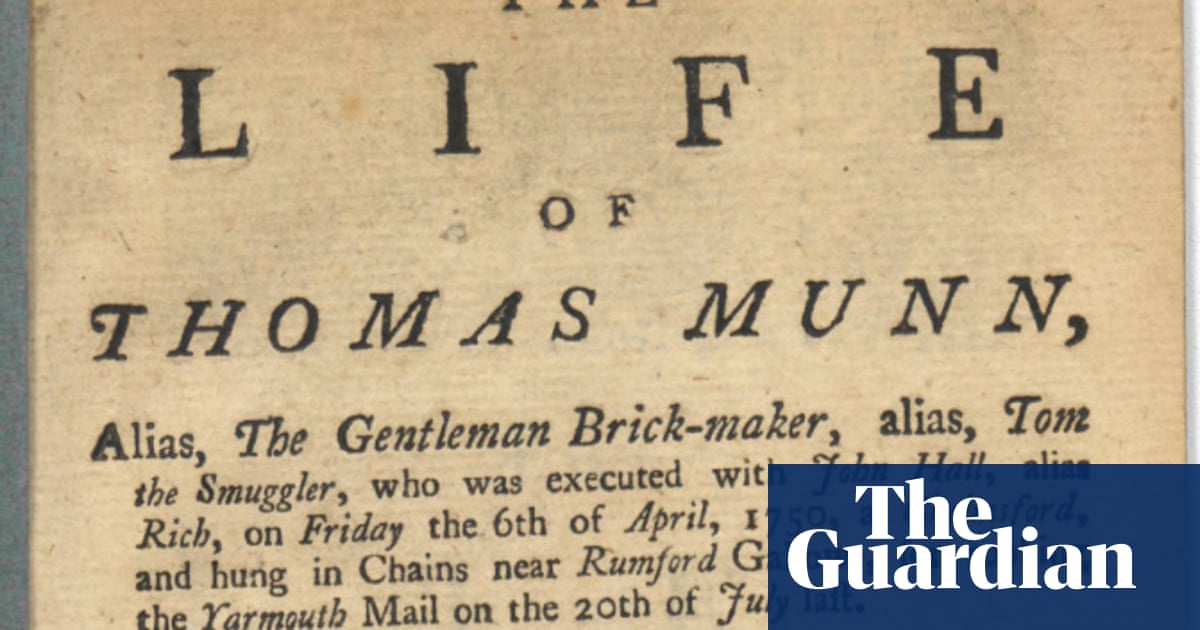 An “incredibly rare” deathbed confession from an 18th-century highwayman, written just before he was “hung in chains” for robbing the Yarmouth Mail and detailing his enlightened response to a failed gay seduction, has been acquired by Horsham Museum.

The Life of Thomas Munn, alias, the Gentleman Brick-Maker, alias, Tom the Smuggler runs to 24 pages and was printed in 1750. It is part of the once-popular genre of deathbed confessions, a precursor of true crime, and purports to be an autobiography handed by Munn to the Yarmouth gaoler on the morning of his execution on 6 April 1750.

The pamphlet, which would have been sold for pennies by hawkers, details Munn’s life of smuggling, robbery and “pranks”, revealing how he turned to a life of crime after growing up in Kent in a brick-making family. He later went to Sussex to become a dancing master, writing of how he “got a set of Young Fellows as undiscerning as myself … to go with me Morris-dancing, as it is called in that County”. This is, said Horsham Museum, one of the earliest documented references to morris dancing.

Munn was back making bricks some three years later, at one point recounting how he “trudged” to Horsham to meet a potential wife. The woman, Munn reveals, was a wealthy 70-year-old widow: “I instantly observed the poor old Soul could not bite me, because she had ne’er a Tooth in her Head, which made her kiss might soft”. A local solicitor is also in the running for her hand in marriage, and Munn gives up his suit after the solicitor visits the widow, and she “daddled up Staires with him, and seem’d to be long enough there to have tried a Cause”. It was, however, “a very unhappy Match,” he notes.

Horsham Museum said that what raises the pamphlet above the usual deathbed confessions “is the degree to which Thomas was self-aware and reflective on his life”. He describes one incident in a Southampton inn, when the son of the innkeeper joined Munn in his bed, informing him that “I love to lie with a naked man”.

I wanted Words to express my Confusion, Surprise and Passion, at his Propositions

“He had not been long in Bed but began to act a Part so Contradictory to Nature that I started up in Bed, wanted Words to express my Confusion, Surprise and Passion, at his Propositions,” Munn says. The “chap” leaves after Munn threatens him with a penknife, and makes “many Excuses” the next day.

As Munn tells it: “It was what I never met with before, nor since, but had Philosophy enough in me, to think it a pity to expose a young Man, tho’ he pointed at a very heinous Sin; and certainly we that commit Crimes beyond what is common, ought to be pitied, for no Man is certain if he comes under the same Temptation, that he shall be able to withstand it.”

Horsham Museum curator Jeremy Knight said that it was notable that Munn had this reaction, and that he had also chosen to give a public account of it.

“To give it space in his confession – the only space he had to give a public account of himself – is really interesting,” he said. “The printer also could have taken offence and not included it – after all the author wouldn’t have any recourse … Yet both thought it important enough to recount. And what Munn states is although it is seen as a sin, his immediate reaction was conditioned by his upbringing and social norms. He is not so sure as he was aroused by the lad, and who are we to judge when we ourselves have that reaction? A desire for toleration and acceptance – it’s human nature.”

Justin Croft, a British book dealer who came across the pamphlet in a US auction and bought it, before selling it to the museum, called it “an interesting reflection on queerness.

“In some respects, it’s a very typical criminal deathbed confession – there were hundreds of them at the time,” he said. “But this sort of queer episode is unusual. It’s not something I’ve noticed in one of these before. It is equivocal – he’s saying this happened, I did what I did, but don’t blame me because would you be able to resist in the same circumstances?”

Horsham Museum acquired the booklet, which is only held in four libraries around the world, with the help of the Friends of the National Libraries. It will display it in a new gallery when it reopens in the summer.