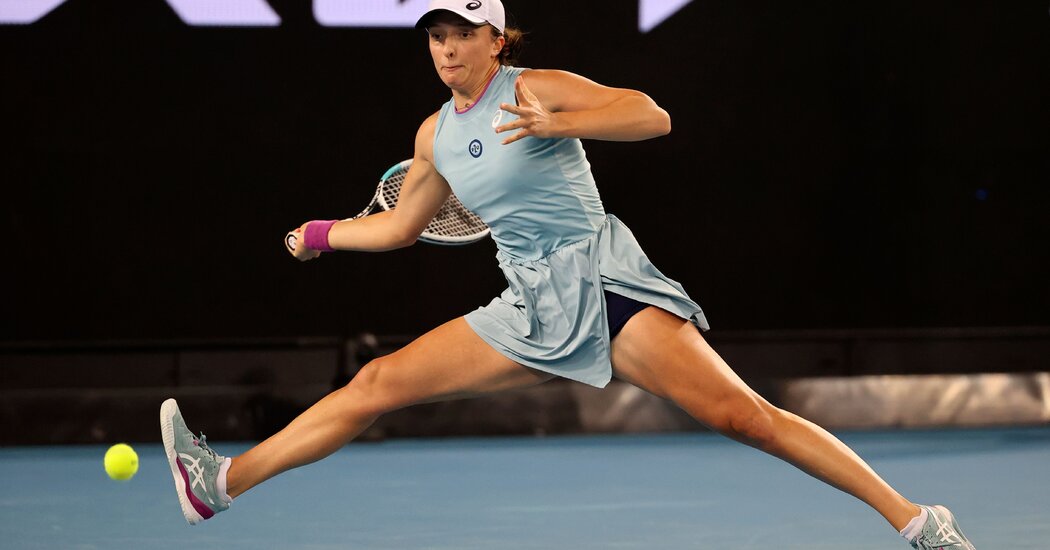 When four reigning Grand Slam champions appear in an order of play, you expect at least one of them to be a clear favorite to advance. In the Australian Open’s round of 16 on Saturday, that is not the case. Naomi Osaka, Dominic Thiem, Iga Swiatek and especially Novak Djokovic all face significant challenges.

Djokovic struggled with an injured side muscle during his third-round victory over Taylor Fritz and will need to recover quickly if he is to challenge the in-form Milos Raonic. But for the others, the threat of elimination is less about their own issues and more about their opponents’ potential to play at a high level.

Here are some matches to keep an eye on.

Because of the number of matches cycling through courts, the times for individual matchups are at best estimates and are certain to fluctuate based on when earlier play is completed. All times are Eastern.

Osaka’s control of her third-round match against the creative and entertaining Ons Jabeur was exemplary. Although Osaka struggled to win points on her second serve, her first serve was enough to earn eight aces during a two-set win.

Garbiñe Muguruza, a finalist at last year’s Australian Open, has dropped only 10 games on her path to the round of 16. Muguruza grabbed the initiative early in each match, using her powerful groundstrokes to dictate points and set up relatively easy winners.

This matchup between two hardcourt specialists could have easily been a Grand Slam final, and speaks to the quality of tennis being played on the WTA tour. Tonight’s match should be an excellent wrap up to the first week of action.

Aslan Karatsev, a qualifier, is playing in the main draw at a major for the first time and has not lost a set, even as he upset the eighth seed, Diego Schwartzman. Karatsev’s powerful, well-placed serves have been a distinct advantage, forcing his opponents onto the back foot on the fast courts at Melbourne Park.

Karatsev was a promising young player in 2017, before a knee injury sidelined him. He did not play an ATP-level event for three years. After his performance in Australia, Karatsev is guaranteed to be ranked in the top 100, and we will get to see more of the Russian without his needing to struggle through qualifying rounds.

In the third round, Felix Auger-Aliassime, the 20th seed, was finally able to defeat his fellow Canadian Denis Shapovalov. Auger-Aliassime reached the round of 16 in the U.S. Open before losing to Thiem and is now aiming to advance to his first Grand Slam quarterfinal.

Thiem, the third seed, came from two sets down against Nick Kyrgios in the third round on Friday night. Thiem won the United States Open in September and reached the final of the ATP Finals, capping his best season on tour.

Grigor Dimitrov, the 18th seed and the 2017 ATP Finals winner, has never reached the final of a Grand Slam tournament. He has had a relatively easy run to the round of 16, beating the 2014 U.S. Open champion, Marin Cilic, in three sets and playing only seven games in the third round before his opponent, Pablo Carreño Busta, retired with an illness.

Dimitrov has won the majority of his matches against Thiem, but the two last faced each other at the 2019 Paris Masters. Though Thiem is in better form now, Dimitrov is well rested and could wear Thiem down with aggressive baseline play.

Swiatek, the 15th seed, won her first Grand Slam title at the French Open in October. The 19-year-old will again meet Simona Halep, the second seed, in the round of 16. In Paris, Swiatek dismantled Halep, losing only three games as she used a variety of powerful rally balls and cleverly disguised drop shots to unsettle her opponent. It was a reversal of their meeting at the French Open in 2019, when Swiatek won just one game.

Halep, a two-time major champion, was a semifinalist at last year’s Australian Open. Her aggressive baseline play is favored on hardcourts, but not by much. Swiatek’s mental toughness and consistency can allow her to stay in points much longer, even when on the back foot.

Here are a few more matches to keep an eye on.