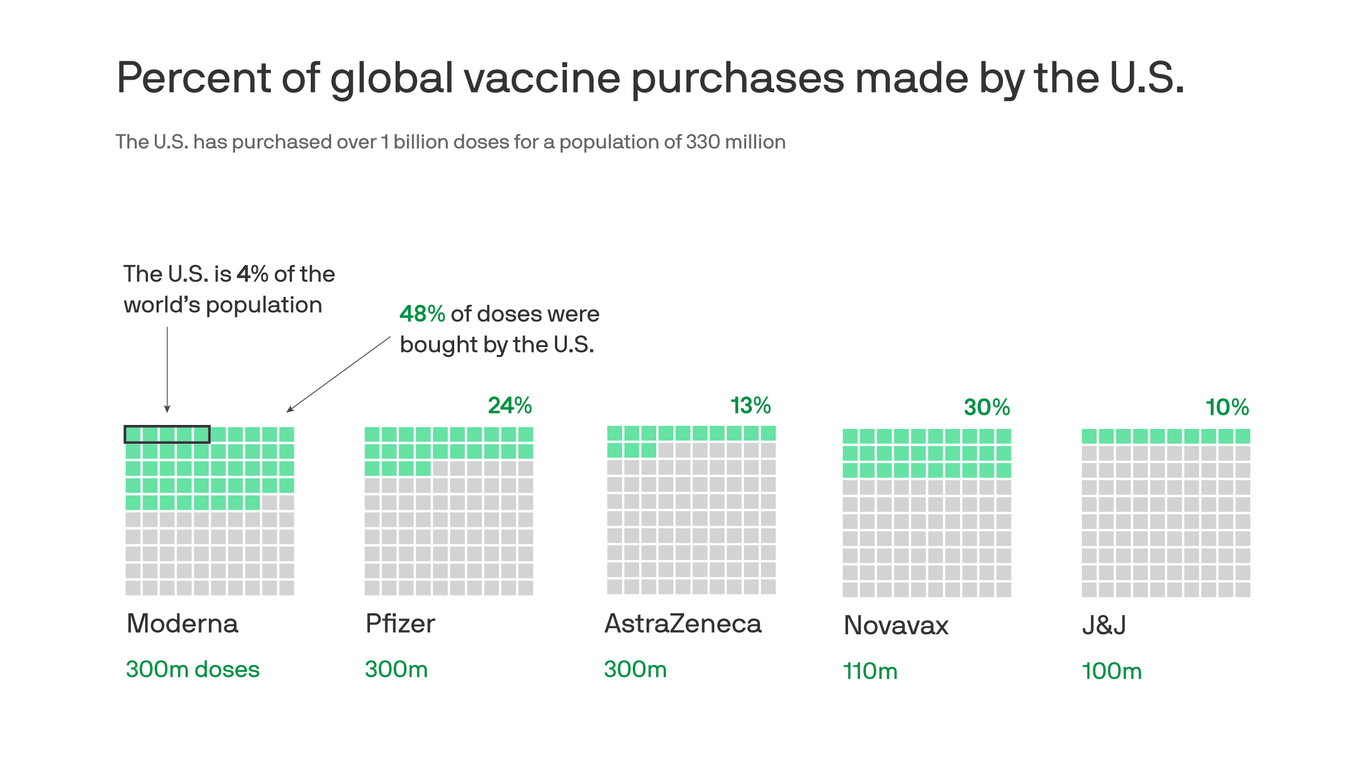 Why it matters: The U.S. is home to 250 million adults, many of whom won’t elect to be vaccinated. It’s also now in control of a big chunk of the global vaccine supply. The White House says the U.S. will eventually donate excess doses to other countries, but it hasn’t released a plan to do so.

The state of play: The administration has been focused almost entirely on ensuring that every American who wants a vaccine will be able to get one by this summer.

Between the lines: Sources in the administration emphasize that despite the bulk orders, only two vaccines have been approved and supplies remain scarce on the ground. Until that changes, they say, it’s too early to focus on sharing doses globally.

The state of play: Many countries’ vaccination plans rely entirely on the global COVAX initiative, which aims to distribute two billion doses this year, mainly to low and middle-income countries. Some don’t expect to vaccinate the bulk of their population until 2023.

Meanwhile, India and China are making bilateral donations to neighboring countries, while China and Russia are selling their state-funded jabs all over the world.

What they’re saying: “From a U.S. perspective, we’re losing a bit of the messaging war out there,” says Dr. Krishna Udayakumar, director of Duke University’s Global Health Innovation Center.

Dr. Zeke Emanuel, vice provost for global initiatives at the University of Pennsylvania, acknowledges that the bulk purchases have sparked international criticism, but says things will look much different in the spring. By then, the U.S. will have ramped up domestic distribution and be able to think more about supplying doses globally.

The bottom line: As Dr. Anthony Fauci has noted, the emerging variants of COVID-19 underscore the necessity of efficiently distributing vaccines all over the world to truly get the pandemic under control.

Worth noting: Most of the 1.2 billion doses of six vaccines currently on the books were purchased as part of the Trump administration’s Operation Warp Speed. Sanofi’s isn’t on our chart because it’s not expected until late 2021.