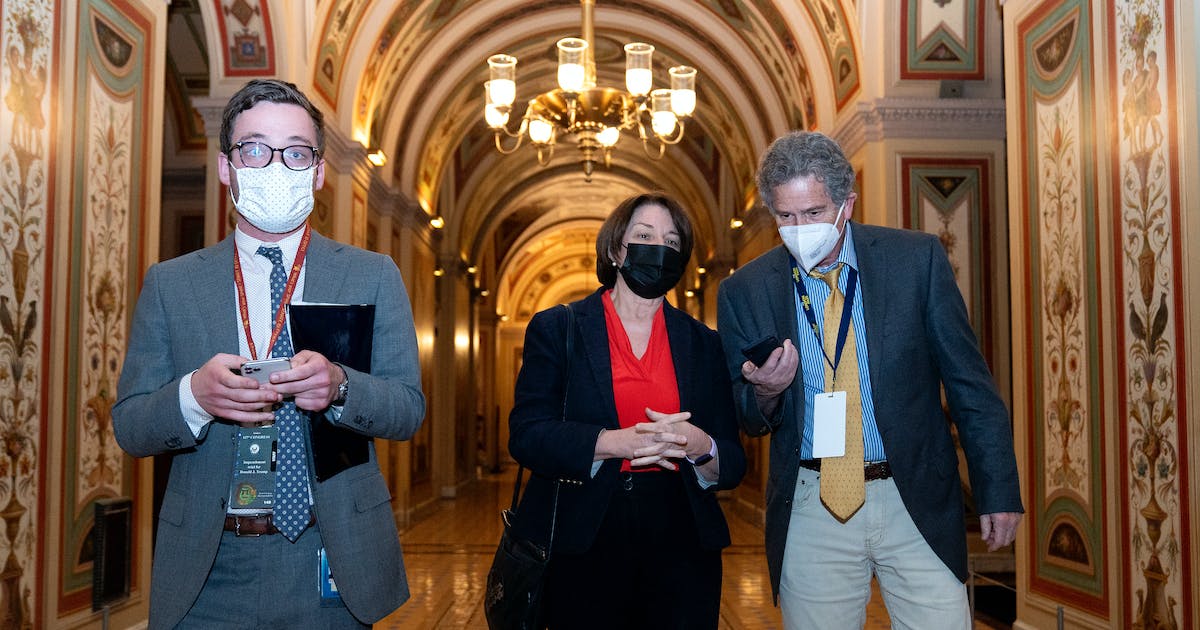 In separate interviews, the two, both Democrats who voted to find Trump guilty, called the acquittal on charges of inciting a deadly mob attack on the U.S. Capitol disappointing. But they said the case was historically important and will help determine how future generations judge those who decided the issue.

Klobuchar and Smith also believe the 57-43 vote to convict — 10 votes shy of the two-thirds needed — could hamstring Trump’s political future.

“Do I think he could run and win the presidency again? No,” Klobuchar said of Trump. “People have seen what he did. … For the sake of history, it was important to bring this case.”

Klobuchar and Smith also agreed that not-guilty votes may haunt the reputations of Republicans who could not bring themselves to vote against the former president despite a mountain of evidence.

“I believe Trump is a terrible danger because of his disregard for the rule of law,” Smith said. “The facts were overwhelming.”

Klobuchar hopes the proof of Trump’s involvement in the Capitol attack “will be forever seared in the minds of Americans” and become the primary thing for which the former president is remembered.

The evidence offered by House impeachment managers documented Trump’s longstanding endorsement of violent behavior by his supporters. It also showed his increasingly angry calls to overthrow the results after he lost the 2020 presidential election. In tweets and speeches, Trump demonstrated a repeated pattern of inflammatory language and lies.

This included what impeachment managers called “The Big Lie” — that the 2020 presidential election was stolen by widespread election fraud that did not exist.

One thing the public and politicians had not focused on before the trial, said Klobuchar, was what Trump didn’t do to stop the riot once it started. He resisted calls from besieged members of Congress to tell his supporters to stop the violence.

“He didn’t call out the National Guard,” Klobuchar said. “What does having an oath to be commander-in-chief mean except to keep the people safe? He failed to do that.”

After the Capitol attack, Republicans offered widespread condemnation of Trump for inciting the riot that left five dead, including a Capitol police officer. Another 140 law enforcement personnel suffered injuries as thousands of Trump supporters chanting “Fight for Trump” stormed the Capitol and overran police, beating them with baseball bats, stabbing them and dousing them with bear spray. One officer lost three fingers. Another lost an eye.

Senate Minority Leader Mitch McConnell, R-Ky., and House Minority Leader Kevin McCarthy, R-Calif., initially offered withering criticism of Trump’s incitement. Yet in the end, McCarthy opposed an impeachment bill in the House. McConnell voted not guilty Saturday, although he followed up with a floor speech that blasted Trump for dereliction.

In the end, seven of the Senate’s 50 Republican members voted to find Trump guilty. Smith said too many of her colleagues looked for technicalities to excuse their votes in the face of the evidence.

Klobuchar and Smith think the seven Republicans who voted to convict Trump — Susan Collins of Maine, Lisa Murkowski of Alaska, Ben Sasse of Nebraska, Mitt Romney of Utah, Pat Toomey of Pennsylvania, Bill Cassidy of Louisiana and Richard Burr of North Carolina — secured a place in history as patriots instead of partisans.

“When I went to the Senate,” said Smith, “I swore allegiance to the Constitution, not to my party caucus.”

Republicans who voted to find Trump guilty “know they did the right thing, the moral thing,” Klobuchar added. “The rest are going to have to deal with it.

“This was not what [Trump’s] lawyer said it was, that this was a fable. It’s not a fable when there’s blood on the floor and people are losing fingers and people are writhing and screaming in pain.”