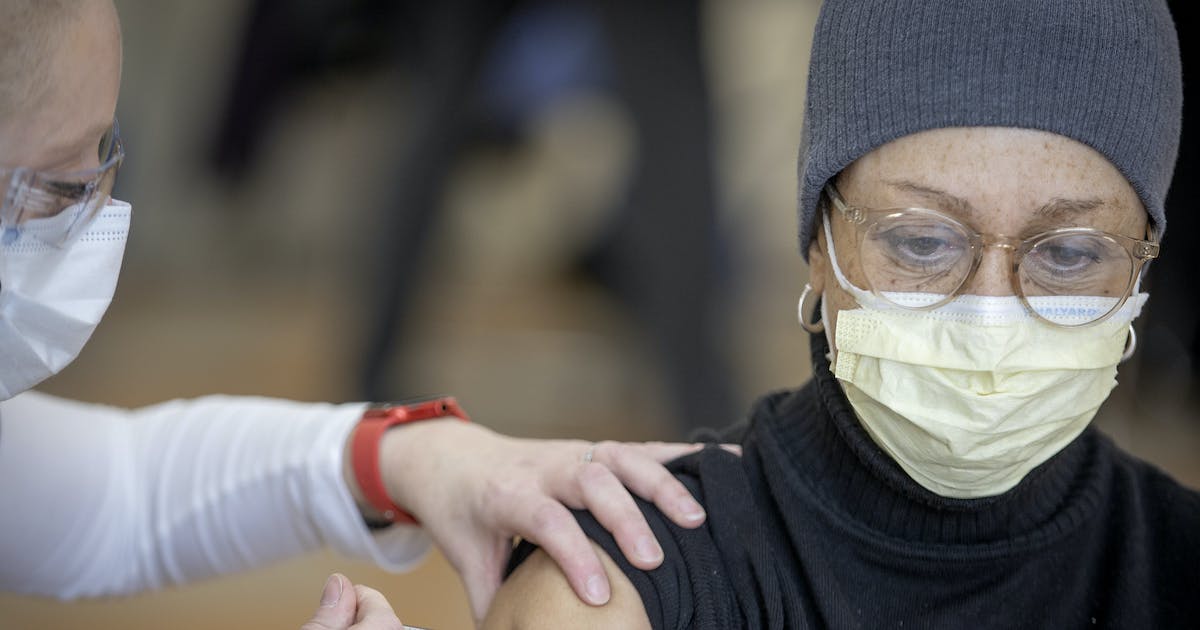 Health officials this week reminded Minnesotans that one properly worn mask — or maybe two — will help protect them from COVID-19, which has caused 6,369 deaths of state residents and 472,791 diagnosed infections.

That toll includes seven deaths and 964 infections reported Saturday by the Minnesota Department of Health.

Minnesota’s vaccination campaign has progressed. The state also reported that 641,844 people have received at least first doses of two-dose COVID-19 vaccines, and 209,010 of them have completed the series.

However, the vaccine is prioritized for more than 1.5 million health care workers, long-term care residents, senior citizens, and teachers — and health officials believe it could be months before there is broad access for all.

Minnesota’s mask mandate was controversial when Gov. Tim Walz imposed it last July, but compliance has increased, more so in urban areas. The governor this week even joked of a connection between frigid weather and declining mask complaints.

Surveys showed that 57% of Minnesotans always wore masks in public in August, but that the rate has increased to 78%, according to the Institute for Health Metrics and Evaluations (IHME) in Washington state. The rate of Minnesotans who say they wear masks most of the time is above 93%.

Warnings of the need for continued compliance this week came from Walz as he scaled back capacity restrictions designed to reduce viral transmissions in bars, restaurants, fitness centers, entertainment venues and private social gatherings.

As of noon Saturday, private indoor gatherings can include 50 people rather than just 10 people from two households. Restaurants can remain open until 11 p.m. and host 250 people or 50% of fire code capacity, whichever number is lower.

Federal health and education officials on Friday singled out mask-wearing as one of the two most important strategies to support the reopening of schools for in-person learning.

“Most clusters in the school setting have occurred where there are breaches in mask-wearing,” said Dr. Rochelle Walensky, director of the U.S. Centers for Disease Control and Prevention.

A CDC study earlier this month also concluded that mask mandates in Minnesota and nine other states were followed by declines in COVID-19 hospitalizations — although Minnesota’s decline last summer was followed by a substantial second wave.

The number of severely ill COVID-19 patients filling intensive care beds in Minnesota hospitals surged from 64 on Aug. 1 to a peak of 399 on Dec. 1, but has declined to 73. The hospitalization rate in Minnesota has fallen below the state’s high-risk threshold.

IHME pandemic modeling last fall had suggested a substantial drop in mortality in Minnesota if the state reached 95% mask compliance, but the impact has declined in updated models due in part to increasing vaccinations.

The institute’s update on Saturday forecast that Minnesota will reach 6,970 COVID-19 deaths by June 1, but that the number could decline to 6,894 if the state achieved universal mask-wearing.

One concern is that mask-wearing will be an ineffective defense against a new wave — which could be fueled by circulation of some new and more infectious variants of the virus — if people don’t do it properly.

Researchers at the University of Minnesota’s Center for Infectious Disease Research and Policy (CIDRAP) reviewed video of public events and found that roughly a quarter of people were wearing them under their noses.

“If the mask has a good fit, you will feel warm air come through the front of the mask and may be able to see the mask material move in and out with each breath,” she said.

CIDRAP Director Michael Osterholm said the CDC message on the use of two masks was oversimplified, because a single, snug mask will work better than two masks for people who can’t breath through them and loosen them.

“It’s about fit and filtration,” he said. “If you can get filtration, that’s great, as long as it doesn’t impede your breathing.”

Minnesota’s debate over masks centered on youth sports this week. Parents in legislative testimony on Wednesday said masks caused reduced vision that resulted in falls and concussions, and breathing problems that in severe cases caused loss of consciousness.

Kelly Dilger of Big Lake showed the Minnesota Senate Health and Human Services Committee a video of her daughter, a varsity basketball player, tripping over players who had fallen to the floor because she couldn’t see them.

Dilger asked after the game what happened and her daughter replied, “If I wasn’t wearing my mask, my peripheral vision wouldn’t have been blocked.”

Minnesota assistant health commissioner Dan Huff testified this week that he had received credible reports of three possible mask-related sports injuries, including two concussions. Overall injury rates do not appear up in sports, though.

“We do have sports injuries. We know that,” he said. “So we have no evidence that it is associated or has been increased by masking.”