AGDAM, Azerbaijan—Some 30 years on from the war that saw Armenian forces drive hundreds of thousands of Azeris from their homes in and around the conflict-torn enclave of Nagorno-Karabakh, many hope they can soon return after Azerbaijan regained much of the surrounding area in a counteroffensive last fall.

But for Sayali Pashayeva, and others like her, that dream is clouded by questions such as where they would live in the rubble-strewn border territories, and whether they could realistically carve out a new livelihood upon their return.

“I thank God for allowing me the possibility of returning to die on my own land,” said Mrs. Pashayeva, 74 years old, on her first visit back to Agdam, once home to her family and 40,000 other people. Her son and daughter unfurled a red rug from the trunk, a gift for the local mosque, the only building left standing here, about 3½ miles from the border with Nagorno-Karabakh, still officially under the control of ethnic-Armenians. The capital there, Stepanakert, is monitored by Russian peacekeepers.

“For 30 years, we have waited for this moment,” Mrs. Pashayeva’s son, Alastun Pashayev, 45, said. Azerbaijan secured control Agdam and several other regions in and around the disputed enclave during a bloody six-week battle before Russia brokered a cease-fire in November.

Actually returning won’t be easy. Mr. Pashayev says he knows his $135-a-month in disability payments and pension paid to displaced people won’t be enough to reclaim the life he lost in Agdam three decades ago, when he was still a child.

The scale of the rebuilding required means the Azeri government budget is stretched, too. Tahir Mirkisili, chairman of an economic planning and business committee in the Azeri parliament, says that over 150,000 homes were destroyed in the areas Azerbaijan recaptured last year, along with 9,000 public buildings, including 700 schools.

Land mines and unexploded ordnance still pepper the landscape. With rail and airport infrastructure long destroyed, the only way in is by road, making it harder to restore public services and rebuild shattered towns.

Yet feelings of nostalgia and patriotism run deep among many Azeris who fled the region and have since struggled to make their way in other parts of Azerbaijan.

The Pashayevs lived in a two-story home in Agdam. The living room measured almost 200 square feet, Mr. Pashayev said. They had a vineyard that yielded up to 15 tons of grapes a year and raised cows and sheep. His father worked as a long-distance truck driver, earning enough to buy land and build a home for each of his nine children.

After they fled, they had to make do for a time in a tent city near the Azeri capital Baku, sharing bathroom and washing facilities with scores of other families.

“We were millionaires,” Mr. Pashayev said. “To become refugees was an insult.”

Elkhan Khanalizade, a screenwriter, was 13 years old when fighting arrived in his village in the southern region of Fizuli. The youngest of six brothers, he lived in the family’s two-story eight-room house, on 5 acres of land where they grew apricots, berries, silk trees and an array of flowers, including roses. His father worked in administration at a winemaking factory. There was a mosque in town and a place to watch movies, even American films, such as Tarzan.

“Everyone knew each other,” Mr. Khanalizade recalled.

The ordeal of fleeing the village and walking 40 miles barefoot to safety, his legs bloody from thorn pricks, remains etched in Mr. Khanalizade’s memory. There wasn’t time to grab any family heirlooms, including a sugar pot carved from walnut and copper that had been passed down through generations.

Life in Baku, where the Khanalizades landed in 1994 has been adequate, Mr. Khanalizade said, “but it’s not home.”

“I don’t share any childhood memories with those who live here in Baku,” he said, adding that his 82-year-old father longs to one day be buried in Fizuli. “That small village where I grew up, that was my world,” he said.

Under a Russian-brokered peace agreement, Armenia will control a significantly smaller part of Azerbaijan. 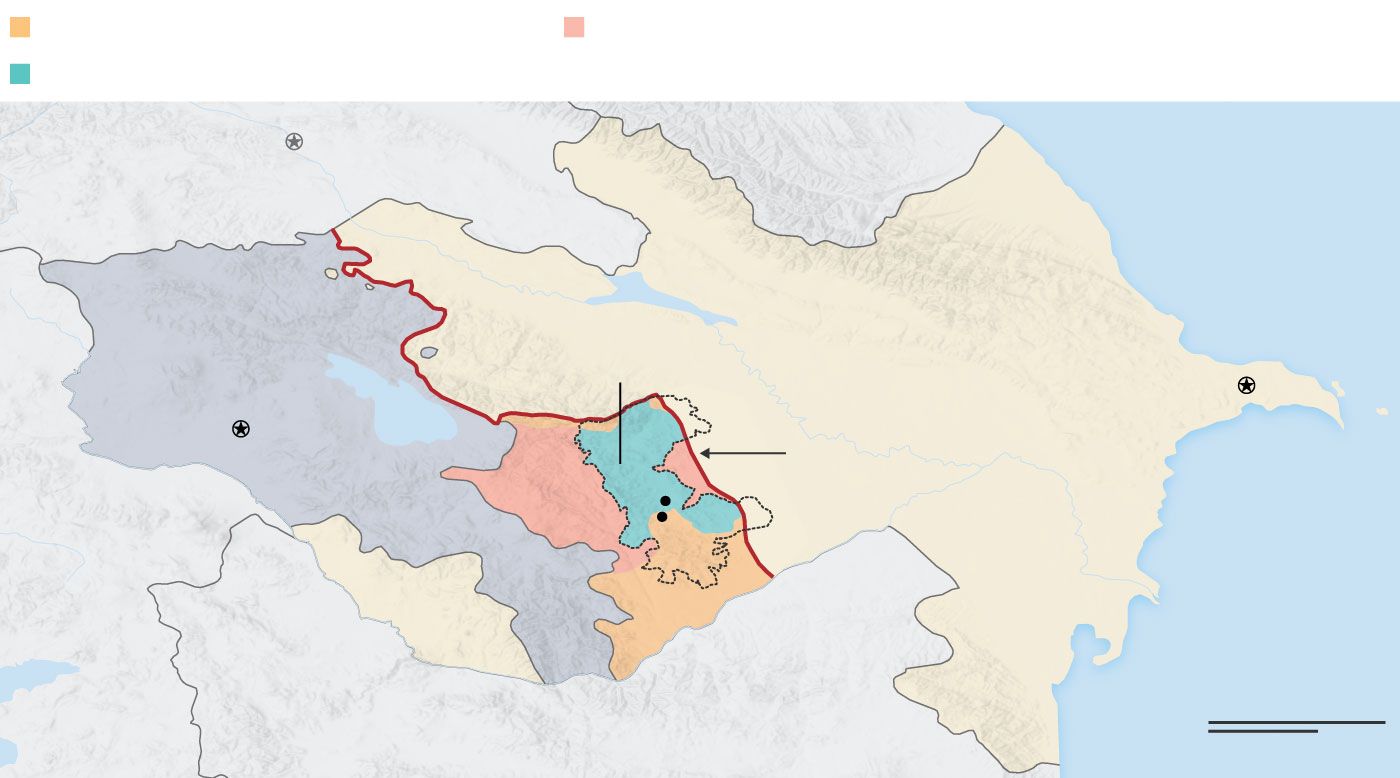 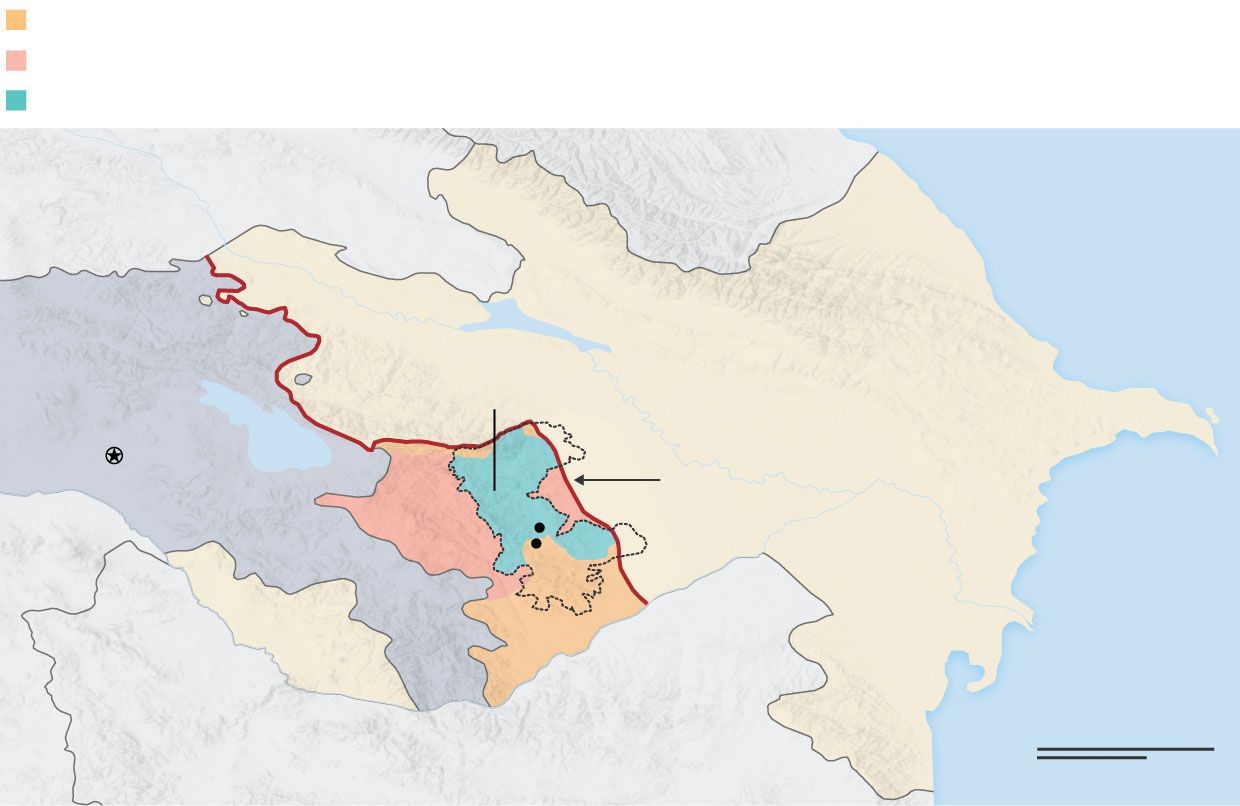 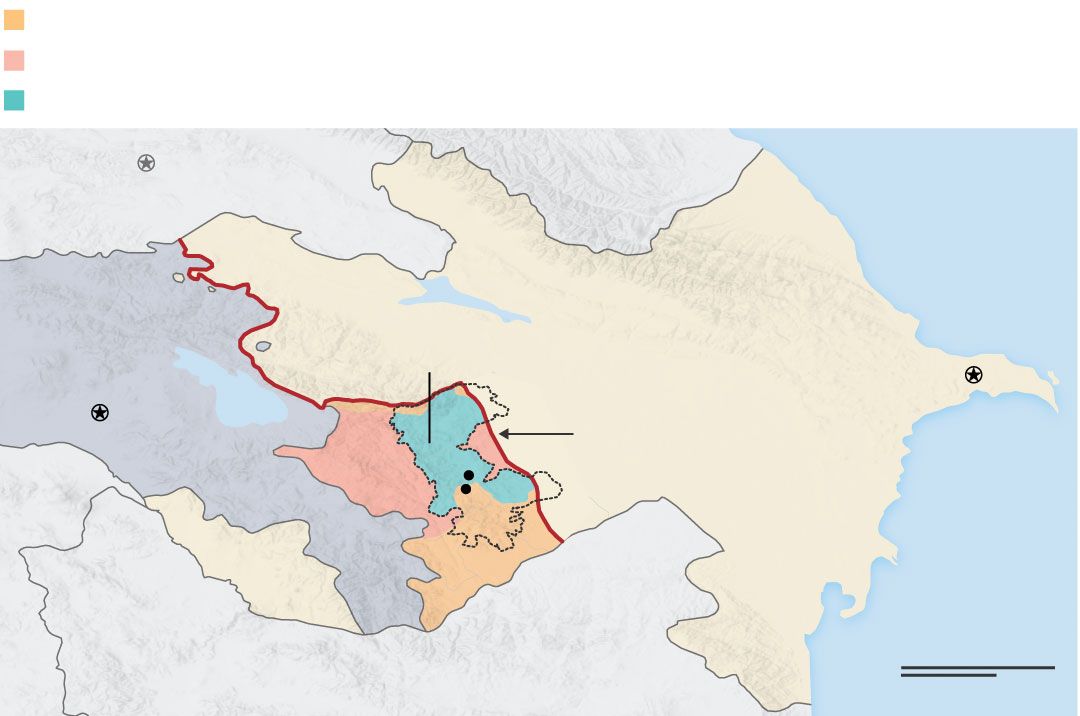 Territories that must be returned

to Azerbaijan by Dec. 1

Territories that will remain under

Armenians have also suffered from the conflict over Nagorno-Karabakh. The recent hostilities can be traced back to 1988, when both Armenia and Azerbaijan were still part of the Soviet Union. As the bloc began to weaken and crack, Armenians, the predominant ethnic group in the area, rose up to demand unification with Armenia, making the case that Nagorno-Karabakh was historically part of their homeland. They later cited a 1991 referendum in which the majority ethnic-Armenian population voted to break away from Azerbaijan, although the United Nations continues to regard the enclave as Azeri territory.

The subsequent conflict claimed some 30,000 lives and displaced hundreds of thousands of people by the time of a cease-fire in 1994.

Azerbaijan’s government, though, has accrued much of its popular support by pledging to regain and resettle Nagorno-Karabakh and the surrounding areas, such as Agdam.

Some 800,000 Azeris have said they want to return, according to a government committee supporting repopulation efforts. Hikmet Hajiyev, Azeri President Ilham Aliyev’s chief foreign-policy adviser, said it has become “a matter of pride.”

The government hasn’t put a price tag on how much it would cost to rebuild the areas its military has recaptured. Some independent economists estimate the ultimate cost could exceed Azerbaijan’s current state budget, of around $15 billion a year. So far, the government has allocated around 10% of that to build new infrastructure in the enclave.

Mr. Mirkisili, the Azeri lawmaker, acknowledges this figure won’t be enough to cover the reconstruction effort.

Officials are instead hoping for private and foreign investment to help bolster the program. Turkey, Iran, Hungary, Italy and the U.K. are among the countries that have said they would help contribute to the reconstruction, including investing in industries and helping to remove land mines.

The rebuilding effort has already begun in some areas now under Azeri control. In the Fizuli region, to the south of Nagorno-Karabakh, the names of villages now adorn shiny new signposts along the main road and its airport is being rebuilt. Azeris who once lived here are exploring the idea of returning.

On a recent morning, Niyaz Iskandarli, 53, stood among the broken headstones of Fizuli’s cemetery, searching for the grave of his brother, Ahad, who was gunned down while his family fled Armenian forces advancing on their village in 1993.

He said he longed to return, but only if Armenians were kept away from the area, which was largely abandoned after the first conflict. Animosity between the largely Muslim, Turkic-speaking Azeris and the predominantly Christian Armenians remains.

“I never want to be friends with them because they killed my brother,” Mr. Iskandarli said, mounting a pole with an Azeri flag at the grave where he thinks his brother is buried.

Others accept that compromises might have to be made.

Karim Karimli, 57, said he has always wanted to return to his hometown Shusha, Nagorno-Karabakh’s second-largest city, now under Azeri control. He returned just once, in 1998, on a media trip organized by a foreign embassy. He scaled a fence to catch a glimpse of his old house on Chamanzeminli Street and watched as a small child played on a carpet that he said his mother had sewn.

A young Armenian couple, who occupied the house after Armenians conquered and resettled Shusha, invited him in for tea.

“They told me that when you come back, we will give you back your home,” Mr. Karimli said, adding that the gesture reminded him of how many Azeris and Armenians in Shusha had good relations before the war.

Now he says he believes the time has come for him to return—and to forgive.

“We must learn to tolerate each other,” he said. “There’s no other way.”