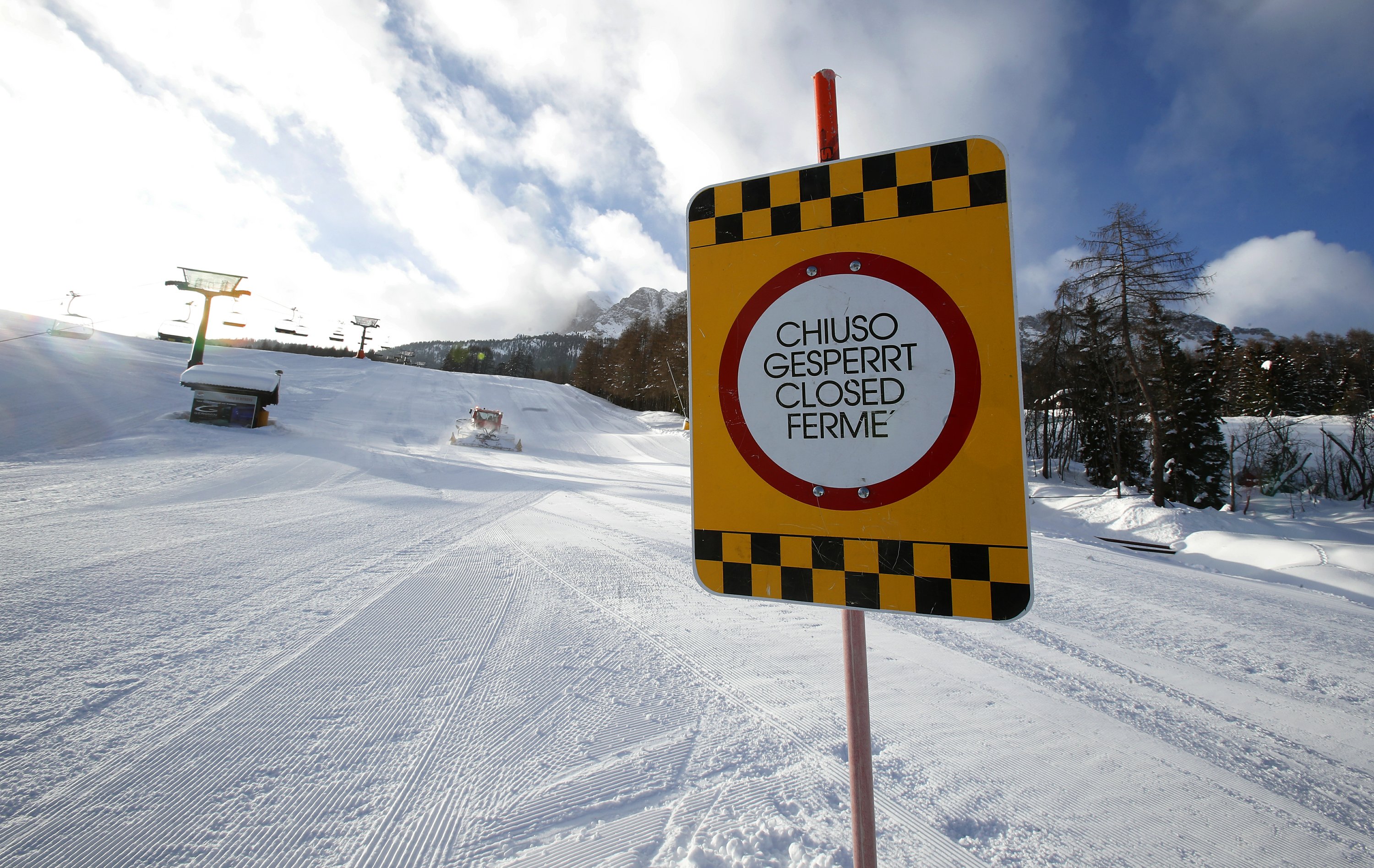 LOS ANGELES — The rates of new coronavirus infections and hospitalizations continue to fall across California, but the state’s death toll remains persistently high.

California on Sunday reported another 408 deaths, bringing the total since the outbreak began to more than 46,840 — the highest in the nation.

Despite the grim death count, health officials are confident that California is emerging from its worst surge of the pandemic.

The number of patients in hospitals with COVID-19 slipped below 9,000 statewide, a drop of more than a third over two weeks.

Scientists say it’s still too early to predict the future of the coronavirus, but many doubt it will ever go away entirel y. The average of new U.S. virus cases has dipped below 100,000 a day for the first time in months. With more vaccines available, business owners wonder whether to require employees to be inoculated. Disability groups are pleading for the vaccine. Japan has formally approved its first COVID-19 vaccine. With street parties banned, Brazil Carnival goes online.

ROME — On the eve of what was supposed to finally be the much-delayed opening of Italy’s ski slopes, the government yanked permission because high circulation of a coronavirus variant.

Health Minister Roberto Speranza’s ordinance on Sunday forbidding amateur skiing at least until March 5 effectively kills hopes of ski lift operators and resort owners to salvage at least some of the season.

The ministry noted that analyses of virus samples indicate that a variant found in Britain is present in 17.8% of recently infected people in Italy.

The ski industry swiftly complained that operators have repeatedly prepared facilities only to be denied permission, as Italy’s crucial tourism industry takes another blow.

MEXICO CITY — Mexico received a shipment of 870,000 AstraZeneca vaccine doses from a plant in India Sunday and laid out plans to vaccinate elderly people in the country’s poorest, most remote areas first.

Mexico has so far used Pfizer shots to vaccinate frontline health workers, but has nearly run out of those. So the government will start applying its first doses of the AstraZeneca shot, which it purchased at $4 each.

Critics say it would be quicker and more efficient to start vaccination efforts in the worst-hit urban areas, where the elderly live closer together. But the government announced plans to send teams by truck, plane and helicopter to 330 outlying townships.

“The decision has been made to start in the most remote, marginalized towns with the country’s poorest population,” said President Andrés Manuel López Obrador.

Mexico hopes to get enough vaccines from Pfizer, Russia, China and India to vaccinate all Mexicans over 60 by mid-April.

LONDON — U.K. government scientific advisers say the COVID-19 variant now predominant in the country may be up to 70% more deadly than previous variants, underscoring concerns about how mutations may change the characteristics of the disease.

The findings from the New and Emerging Respiratory Virus Threats Advisory Group, published Friday on the government’s website, build on preliminary research released Jan. 21. The group includes experts from universities and public agencies across the U.K.

The new report is based on analysis of a dozen studies that found the so-called Kent variant, named after the county where it was first identified, is likely 30% to 70% more deadly than other variants. The studies compared hospitalization and death rates among people infected with the variant and those infected with other variants.

The results of the analysis are worrisome, said Dr. David Strain, a clinical senior lecturer at the University of Exeter Medical School and the clinical lead for COVID at the Royal Devon & Exeter Hospital.

“The higher transmissibility means that people who were previously at low risk of catching COVID (particularly younger fitter females) are now catching it and ending up in hospital,″ Strain said. “This is highlighted by the latest figures for hospitalization that now suggest almost 50:50 male to female ratio compared to this being predominantly in men during the first wave.″

The Anchorage Daily News reported Friday that three large high schools in the district — Colony, Palmer, Wasilla — are among five facilities currently closed because of the outbreaks.

It is unclear when they are expected to reopen.

Public health officials say some of the confirmed COVID-19 cases started with students mixing at school lunches, but most are attributed to extracurricular activities, including sports.

PRAGUE — The Czech government has re-declared its state of emergency for next two weeks to be able to effectively tackle the coronavirus pandemic in one of the hardest hit European countries.

The decision has been approved in defiance of the lower house of Parliament, which has refused the government’s request to extend the tool that gives the Cabinet extra powers necessary to impose and keep in place strict nationwide restrictive measures and limit people’s rights.

Some lawyers and politicians say the government’s move violates the country’s Constitution.

The current state of emergency would expire on Sunday. The government could use other legal options to reimpose some measures but not all of them.

That means bars, restaurants and cafes would reopen Monday as well as services could return to business while the nighttime curfew and a ban for more than two people to gather in public would be cancelled.

The government warned that would worsen the pandemic and might cause the health system to collapse.

Sunday’s move comes at the request of the heads of governments of all 14 Czech regions who say have not enough powers to fight the pandemic.

Blangiardi said during a news conference on Friday that he believes he is being realistic and is managing expectations following potential coronavirus superspreader events like the Super Bowl and Valentine’s Day.

Blangiardi said he will shift the island to the next reopening stage before March 15 if numbers remain low.

Some business owners have disagreed with the decision, arguing their businesses are still struggling.

Meanwhile, the city extended the deadline to renew driver’s licenses, state identification cards and permits to mid-April in response to the coronavirus pandemic.

As of Friday, Hawaii has had 26,743 confirmed COVID-19 cases and 425 deaths since the pandemic began in March.

UNDATED — Though many people with disabilities are more vulnerable to COVID-19, in some U.S. states they’re being left behind in the massive effort to get limited vaccines into the arms of those who need them most.

People with disabilities have been pushed down the priority list in places such as North Carolina and California, where the state reversed course after days of public pressure.

In Minnesota, parents are begging unsuccessfully to give their vaccination spots to their children whose Down syndrome makes them up to 10 times more likely to die if they catch the virus.

People with intellectual and developmental disabilities are often immunocompromised, putting them at greater risk for complications if they get sick. They’re also more likely to lose their jobs, can have a harder time with mask-wearing and social distancing, and have had to worry about whether they would be less likely to get critical care at hospitals.

Many have also had to make do with less help, since caregivers can be an infection risk.

LONDON — The U.K. government said Sunday that it reached its goal of giving at least one COVID-19 vaccine shot to at least 15 million of the most vulnerable people in the country by mid-February, increasing pressure on ministers to clarify when they will ease a lockdown imposed in early January.

More than 15 million people, or 22% of the U.K. population, have received their first shot. The figure includes most people in the government’s top four priority groups, including everyone over 75, frontline healthcare workers and nursing home staff and residents.

“15,000,000! Amazing team,″ Nadhim Zahawi, the vaccines minister, said in a tweet that featured a red heart and three syringes. “We will not rest till we offer the vaccine to the whole of phase1 the 1-9 categories of the most vulnerable & all over 50s by end April and then all adults.″

Johnson said in England, everyone in the four top priority groups had been offered the vaccine. He plans to release further details on the vaccination effort on Monday.

NEW YORK — Millions of New Yorkers with health conditions that leave them at high risk of illness from COVID-19 can theoretically sign up for appointments at state-run vaccination sites starting Sunday, but a lack of vaccine supply means many will be frustrated in their search for a shot.

Seven million New Yorkers, including health care workers and people over 65, were already eligible for vaccinations under previous state rules. About 3 million people over 16 with so-called comorbidities will become eligible starting Monday.

In order to be vaccinated, people will have to provide a doctor’s letter, a signed certification or other medical information showing they have an eligible health condition.

PARIS — An enormous plastic sheet in the shape of a heart was unfurled Sunday on the plaza outside Paris City Hall, inscribed with messages of inspiration and love on a Valentine’s Day shadowed by the pandemic.

With French restaurants, bars, tourist sites and borders closed to keep the virus at bay, lovers had to be more creative than usual to celebrate the holiday this year.

One pair bravely took selfies on the plaza overlooking the Eiffel Tower, as wind buffeted their heart-shaped red balloon.

The pandemic didn’t totally kill the holiday spirit – business was brisk at Parisian chocolate and flower shops, which are allowed to stay open.

ATLANTA — Coronavirus cases continue to decline in the U.S. after a winter surge.

Researchers at Johns Hopkins University say the seven-day average of new coronavirus cases in the country dropped below 100,000 on Friday for the first time since November 4. It stayed below 100,000 again on Saturday.

The seven-day average was well above 200,000 for much of December and went to roughly 250,000 in January, as the pandemic came roaring back after it had been tamed in some places over the summer.

Meanwhile, the director of the U.S. Centers for Disease Control and Prevention, Rochelle Walensky, told CNN on Sunday that CDC guidelines provide more flexibility in opening schools as disease rates in the community come down.

The CDC released its long-awaited roadmap for getting students back to classrooms during the pandemic on Friday. It said in-person schooling can resume safely with masks, social distancing and other strategies, and vaccination of teachers, while important, is not a prerequisite for reopening.

While France’s own vaccination program has suffered from delivery delays and bureaucratic troubles, Macron told the Journal du Dimanche newspaper in an interview published Sunday that “African countries are asking us, justifiably, about their access to vaccines.”

Macron met with global pharmaceutical CEOs and vaccine experts in recent days to discuss programs to fight vaccine inequality, to help end the pandemic and revive economies faster. Among those programs is the U.N.-backed COVAX, which has suffered a slow start because of funding shortages and lack of commitment from some major world powers.

“We must speed up this effort further because each week counts,” Macron was quoted as saying. He also said vaccines made in China and Russia should be “integrated into this great multilateral effort against the pandemic.”