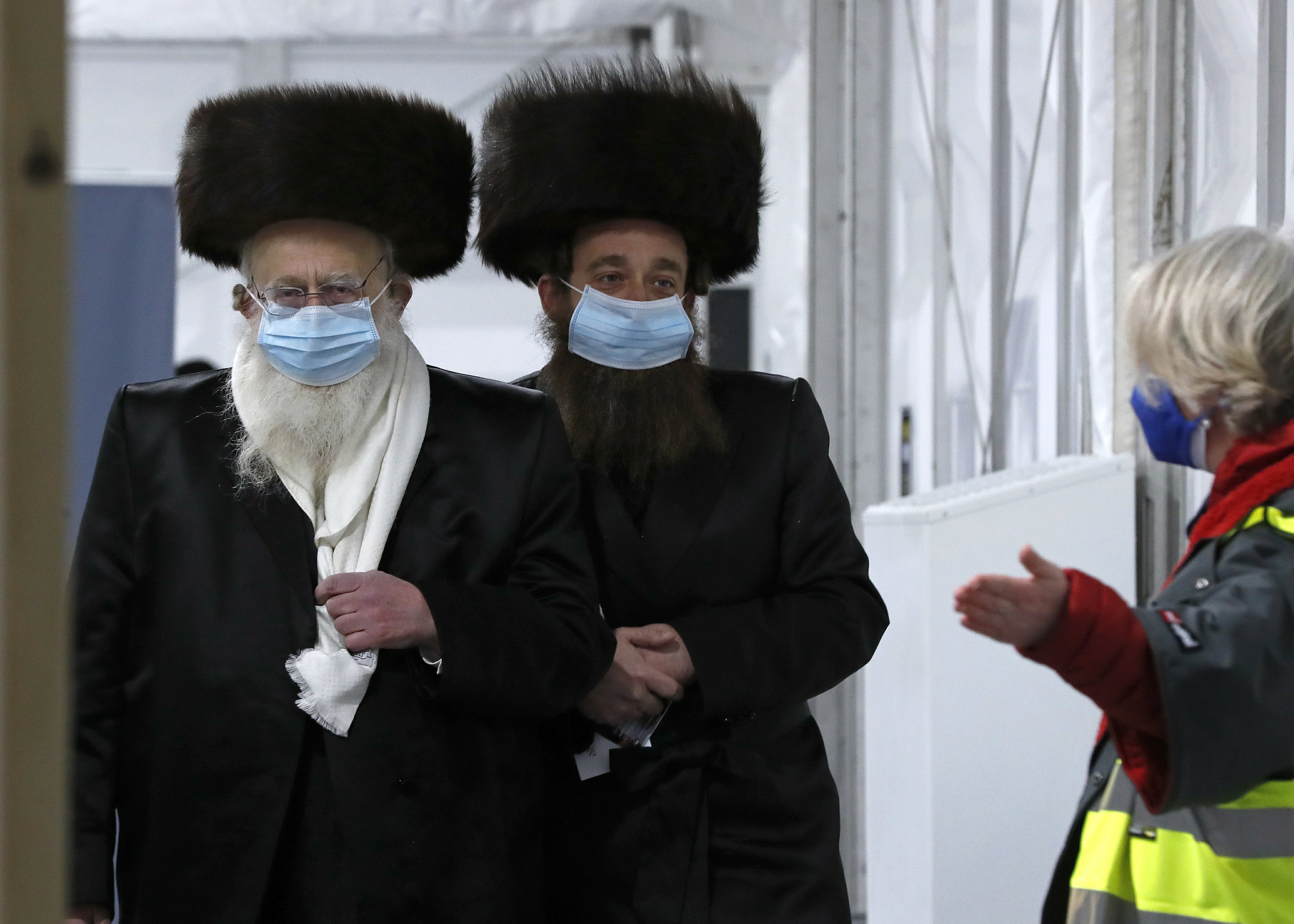 LONDON (AP) — As people across England huddled indoors amid freezing temperatures and a national lockdown, nearly 300 elderly men and women lined up outside a health center in northeast London to be vaccinated against COVID-19.

But the wide-brimmed hats and long black coats that shielded them against the cold were more about religion than the weather. These ultra-Orthodox Jews are members of a community that has been especially hard hit by the virus, which has killed almost 117,000 people in Britain.

In hopes of breaking down barriers that sometimes isolate the Orthodox from wider society, community leaders organized the pop-up vaccination event for Saturday night to coincide with the end of Shabbat, the Jewish day of rest. They believed this was the best time to attract the faithful because it would fit perfectly into post-service schedules — and people would be more relaxed since no one was working.

“I want to see the grandchildren and I haven’t seen them for months, so you know this is an ideal time to get it,” Asher Warmberg, 66, said after he rolled up his sleeve. “And hopefully we can see them soon.”

As Britain’s National Health Service reached its goal of giving a first dose of vaccine to more than 15 million people, including health care workers and everyone over 75, authorities are trying to reach those who have been missed in the national drive. The need is particularly great in Stamford Hill, the center of north London’s ultra-Orthodox community.

Since many ultra-Orthodox shun social media and the internet, people here were slow to realize the dangers of COVID-19 and their community has experienced some of London’s highest infection rates. Many fell ill last March after the Jewish festival of Purim, a day of feasting and merriment.

Local leaders, determined not to allow history to repeat itself, raised 10,000 pounds ($13,840) and asked to be studied by the London School of Hygiene & Tropical Medicine to find out why they were so hard hit.

An analysis of blood samples from 1,242 people found an infection rate of 64% — one of the highest recorded anywhere in the world. In contrast, the Office for National Statistics estimates that about 16% of England’s population has had COVID-19.

Assistant Professor Michael Marks, one of the researchers on the project, said preliminary results suggest the ultra-Orthodox saw a lot of cases because public health officials didn’t fully understand the virus last spring and because their small community is so close-knit.

COVID-19 was probably circulating much more widely than initially thought, which meant that government messaging about the virus lagged behind the real risk. This allowed the virus to spread rapidly in the community.

“And then they had a big religious event, which they all attended, because at the time the advice was to carry on, so I think that might explain the big uptick at the beginning,” Marks said.

Community leaders now believe one way to prevent a recurrence is to ensure that as many people as possible get vaccinated. So they eliminated excuses not to attend. Besides the timing, the message to come went out through community channels, so people heard about it. In light of sensitivities, it was staffed with both male and female vaccinators.

Other faith leaders took part, like Mustafa Field of Faiths Forum for London, a Muslim. They are hoping a cross-religion model helps community organizations take the lead going forward. It’s a model the British government hopes to use across the country as the NHS tries to ensure the vaccination drive doesn’t miss other hard-to-reach communities.

“Having them do this here is really a great lesson to see how we can replicate some of this,” said Vaccination Minister Nadhim Zahawi, who attended the event. “So we will take this as a great model of faith groups working with the local government and, of course, the NHS.”

Jewish leaders also hope the vaccination drive will help dispel the misconception that ultra-Orthodox Jews are ignoring the danger posed by COVID-19.

Police raided an Orthodox wedding at a local school last month because it was attended by 100 people in violation of lockdown rules barring large gatherings. An investigation by the Jewish News suggested it was not an isolated event. Ugly headlines about the event were seen as tarring the whole community, rather than the rule-breakers.

“What happened was unacceptable. Hopefully, scenes like that will never happen again,” Friedman said. “But there is a strong feeling that we’re being treated a little bit unfairly, and the whole community is being branded with the same paintbrush, which is very unfair.”

The vaccine is a “big step forward” for the Orthodox community and British society as a whole, Rabbi Michael Biberfeld said as he sat down to get his shot. He said Orthodox Jews have an obligation to “take the vaccine as soon as possible to make sure” they stay healthy and don’t infect other people.

“As I quoted one of the Israeli rabbis saying, ‘This is one prick for the person taking the vaccine, but a huge leap forward for all of us, for humanity,’” he said.

This story has corrected the name of a person getting a vaccine dose to Asher Warmberg.