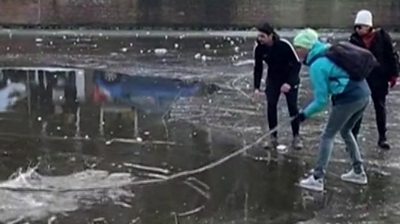 A group of skaters had to be rescued after plunging into freezing water when the ice they were standing on cracked and broke in Amsterdam.

The rare freezing of waterways across the Netherlands attracted many ice skaters at the weekend, however warmer temperatures is melting the ice, prompting a warning about the danger from officials.

Bystanders used ropes, hockey sticks and golf clubs to drag the ice skaters to safety, some also putting their own safety at risk.