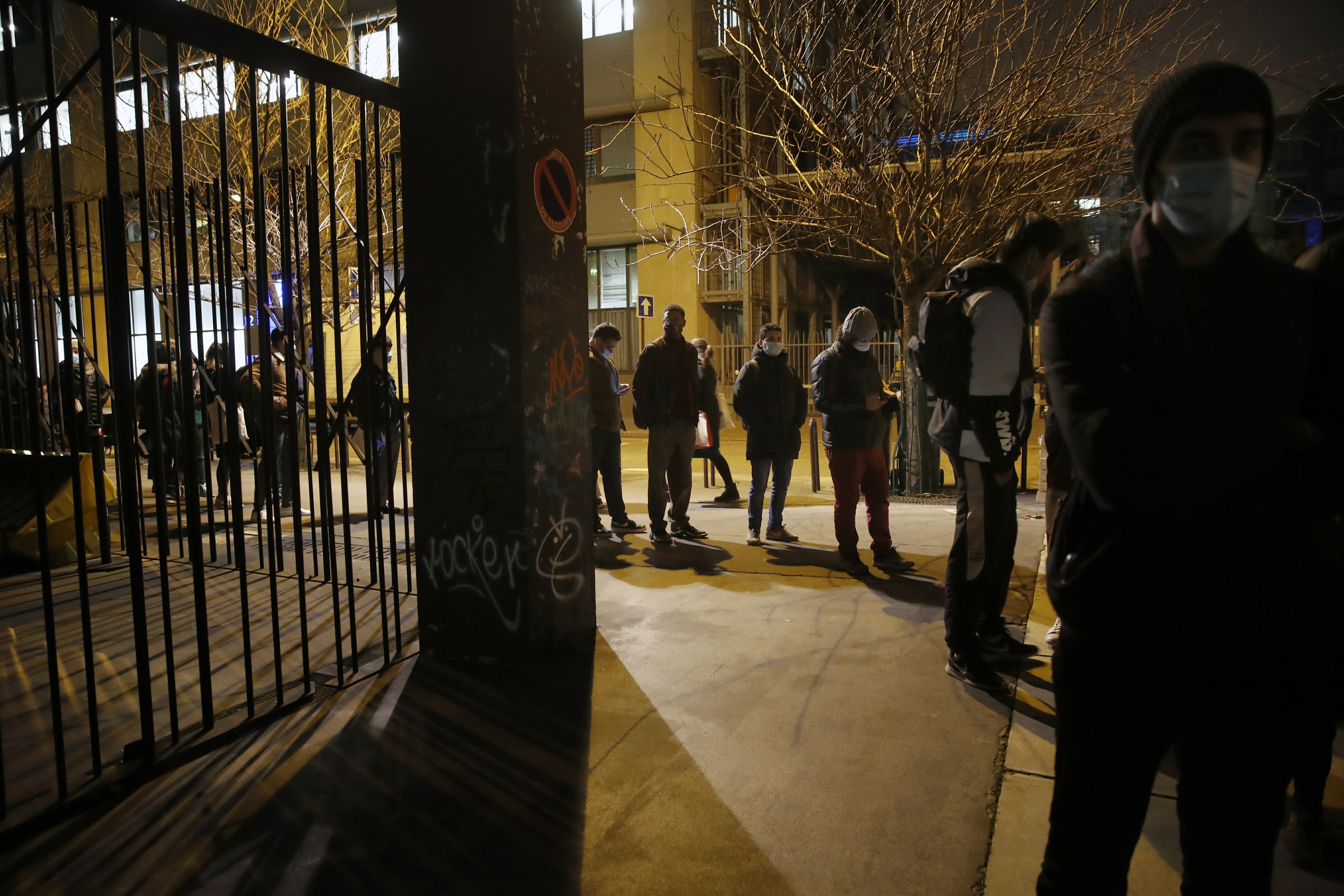 As the virus crisis drags on, hard-hit French youth struggle

PARIS (AP) — On a recent evening, Leïla Ideddaim waited to receive a bag of food, along with hundreds of other French young people who are unable to make ends meet. She saw the chitchat that accompanied the handout as a welcome byproduct, given her intense isolation during the pandemic.

The 21-year-old student in hotel and restaurant management has seen her plans turned upside down by the virus crisis. With restaurants and tourist sites shuttered and France under a 6 p.m. curfew, her career prospects are uncertain. Odd jobs that were supposed to keep her going during her studies are hard to come by.

“I’m in a fog,” said Ideddaim, who moved to Paris last year and is now struggling to meet both her basic needs and her emotional ones.

She is not alone. The long lines of young people waiting for food aid that stretch through Paris neighborhoods several times a week are a dramatic symbol of the toll the coronavirus has taken on France’s youth.

The pandemic has devastated economies the world over, pushing vulnerable people deeper into poverty or tipping some into it for the first time. In France, the economic fallout has weighed particularly heavily on young people — and their woes have only been compounded by disruptions to their studies and social interactions.

Nearly a quarter of French young people can’t find work — two-and-a-half times the national unemployment rate and one of the highest in the European Union’s 27 nations. Many university students now rely on food aid and several organizations have rallied to meet the need.

The pandemic has led to a surge in mental health complaints that authorities say are most acute in people without work, those in financial hardship and young adults. A hotline devoted to students has seen a surge in calls, and young people have streamed into psychiatric wards.

As French President Emmanuel Macron acknowledged, “it’s hard to be 20” in coronavirus times.

Other European countries have also noted a particularly heavy toll on young people. In Belgium, some areas are giving aid to students to help them pay for food, rent, transport and psychological help. In Germany, a study by the University Medical Center Hamburg-Eppendorf found about one in three children are suffering from pandemic-related anxiety, depression or are exhibiting psychosomatic symptoms like headaches or stomach aches.

For Ideddaim, who has to support herself, the pandemic means a spreadsheet that doesn’t always add up. Each month, she needs over 800 euros ($970) for housing, transport and utility bills. She could not get a well-paid apprenticeship because restaurants are closed and hotels are in a precarious situation.

Instead, an internship at a campground 45 kilometers (28 miles) east of Paris brings in 300 euros a month — and alleviates her isolation. She also earns some money from occasional temp work in shopping centers. Still, she has almost spent all her savings.

“I draw up a Google sheet, and I put down my expenses and my fixed costs every month. So I look at how much comes in, and I calculate what I’m left with and where I can tighten my belt — on food for instance,” she said.

Ideddaim is just one of many needy students being served by Linkee, an organization that has long collected and distributed unused food to fight waste but only recently turned its attention to students.

Farid Khelef, 28, came from Algeria to study in France. He would not have imagined he would one day be waiting for food aid.

“Before, I was working as an electrician in parallel with my studies. Because of the health crisis, it’s been almost four months that I have no job,” he said while waiting for a bag from Linkee.

The organization began offering meals and fresh food to students in October — and their twice-weekly handouts now serve about 500 people, up from 200.

“We are a safety net for all these students … who don’t have enough money to buy some food and have no other solution than coming to get some quality food and at the same time find a friendly atmosphere,” said Julien Meimon, the organization’s president.

With a smile, Ideddaim showed her bag filled with salad, cauliflower, apples, smoked salmon, yogurts and chocolate. But she comes to the food distribution site for more than just basic sustenance.

“It’s a great morale boost — to know that I’m going to eat well and to come to a place with plenty of people and everyone is in a good mood,” she said.

With only three weeks of in-person classes since September and being new to the city, she has struggled to create the social connections that are essential to building an adult life.

“It has not been easy to integrate, to meet with people,” she said. In the meantime, she enjoys chatting on the phone with her grandmother, who also lives alone, and is looking forward to working this summer in the Atlantic seaside resort of Biscarrosse — as long as restaurants reopen.

Many young people are similarly struggling. Nightline in Paris, a hotline for students, has seen a 40% jump in calls since the country entered its first lockdown in March.

Depression among people aged 18 to 24 has jumped from 16.5% at the beginning of April to 31.5% in November, during the country’s second lockdown, according to France’s national health agency, Sante Publique France.

Authorities have noticed the problem and, starting this month, they have asked universities to allow students to go back to classes one day per week to help them regain some sense of normalcy. The institutions have also started providing 1-euro meals.

There are concerns the pandemic could have long-term effects on youth. In the U.K., the Institute for Fiscal Studies think tank estimated that young people will have missed out on more than half a year of face-to-face learning, or more than 5% of their total time in school, by the end of the country’s latest national lockdown. The lost education could cut average lifetime earnings by 40,000 pounds ($55,325) per student, it estimated.

Ideddaim, who prefers to look on the bright side, said she feels privileged to get food aid at all.

“That kind of aid does not exist in many countries, and we’re lucky enough in France to have that,” she said.

Samuel Petrequin in Brussels, Danica Kirka in London and Kirsten Grieshaber in Berlin contributed to this report.