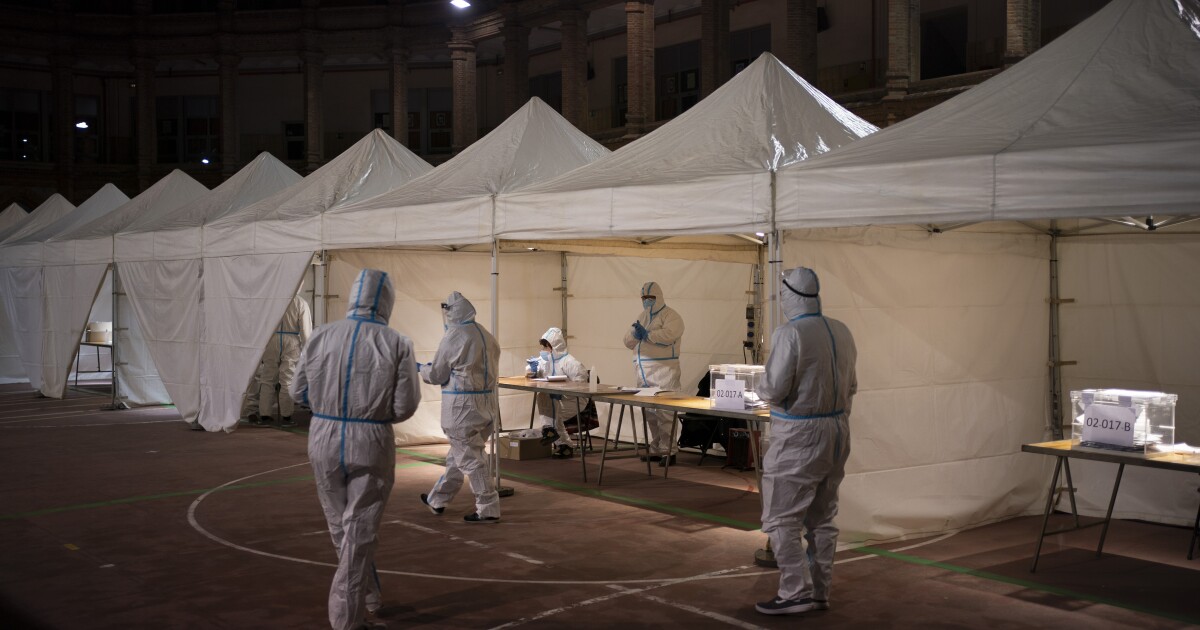 The future government of Spain’s restive Catalonia region is in the hands of a man spending his nights in a prison cell for sedition.

After completing one-fourth of his 13-year sentence for his part in a 2017 secession attempt, Oriol Junqueras was granted open prison regime in late January, meaning he can spend daytime outside prison. He devotes much of that time, in and outside, to leading the Republican Left of Catalonia, the party now positioned to choose its governing partners after this weekend’s inconclusive regional election boosted the separatists’ power.

While the pro-union Socialist Party of Spanish Prime Minister Pedro Sánchez claimed a narrow victory in votes, candidate Salvador Illa has a very difficult path to forming a government.

Republican Left of Catalonia tied the Socialists in seats, with both set to send 33 lawmakers each to the regional legislature. But it has more potential partners to woo into a coalition thanks to the good showing by its brethren in the separatist camp, which increased its power in Sunday’s election despite years of frustrated ambitions to create a new Mediterranean nation.

On the back of a record low turnout, the three main parties that want to create a Catalan state expanded their strength to 74 lawmakers in the 135-seat Barcelona-based parliament — up from 70 in 2017.

“I have no doubt that the other political forces will do what they should, which is give their support to the most-voted pro-secession party,” Junqueras said. “Our convictions are clear, firm, and unwavering to the point that we have sacrificed our personal liberty for them.”

Junqueras discarded the potential option of joining in an alliance with the Socialists, which while sharing left-wing social policies, rejects the separatists’ goal of holding an official referendum on independence.

Junqueras and other separatists claimed that pro-secession sentiment has increased after all the ballots cast for pro-secession parties surpassed 50% of the popular vote for the first time. A record low turnout, however, of 53% — down from 79% in December 2017 — appeared to favor the separatists, given that participation fell sharpest in the cities where pro-union parties do better.

“Breaking 50% is important so we can convince those that do not want independence and make them reflect on what we should do,” he said.

The separatists’ celebration was felt in Madrid.

Spain’s coalition government of Sánchez’s Socialists and the leftist United We Can appeared vindicated in its strategy of holding talks with the separatists and striking deals with Republican Left of Catalonia to pass legislation, after it gained among moderate unionist voters.

The other end of Spain’s political spectrum was shaken.

The far-right Vox party, with its unabashed hardline stance against Catalan secession and illegal immigration, confirmed its ascendancy across Spain by entering the Catalan parliament with an impressive 11 seats.

“The Catalans have put us in a situation that we could not ever have imagined,” Vox national leader Santiago Abascal said after his party’s strong performance.

The liberal Citizens, which started as a small party in Barcelona to stop separatism in 2006, collapsed from having won the 2017 elections with 36 seats as the flagbearer of unionism to just six seats, putting its future as a party in doubt.

And the traditional conservatives, the Popular Party, were unable to benefit from Citizens’ debacle and actually lost a seat to retain just three lawmakers despite the campaign efforts of opposition leader Pablo Casado to mark a friendlier tone toward Catalonia.

“Vox convinced a part of the population that it was the best option to stop something that is a problem, that Spain could be fractured, and Catalonia as well, since Catalonia is divided into two blocs,” Montserrat Nebrera, analyst and former lawmaker of the Popular Party in Catalonia, told the Associated Press.

Nebrera argues that “it is not that conservative voters are more racist, or xenophobic, or identify more closely with the far-right, but they think that they had already tried two alternatives [Citizens and Popular Party] to no effect, so why not try to the third option” in Vox.

Political observers believe that Casado’s hold on the party that has yet to win an election outside its stronghold of northwest Galicia since he took over in 2018 has been further weakened by its incapacity to stop the insurgent Vox.

“As the supreme leader, all eyes on are him,” Nebrera said. “Surely there will be movement at [party headquarters]. If it does not lead to his downfall, then it will at least put his leadership in doubt.”