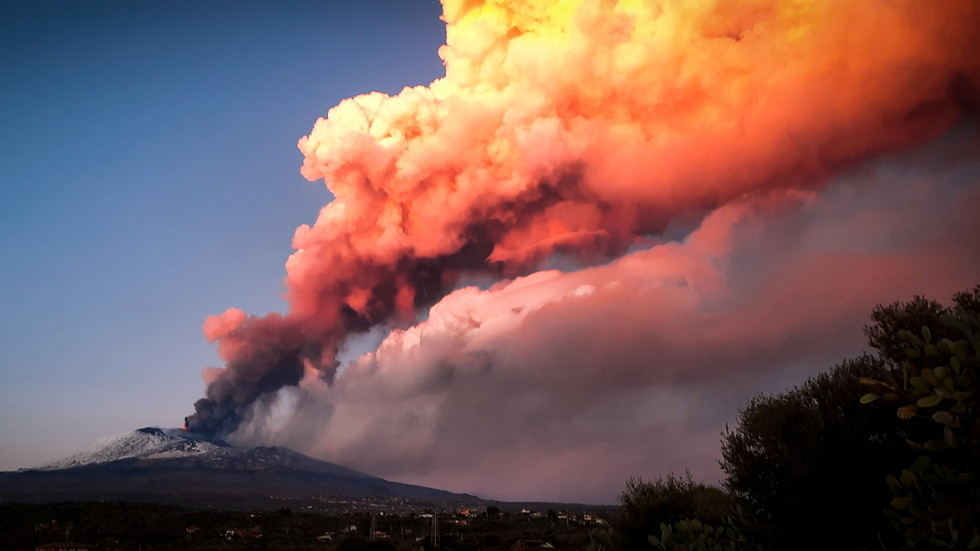 Mount Etna in Sicily, Europe’s tallest volcano and one of its most active, has erupted for the second time in as many days, with a stream of molten rock and a massive ash cloud tinged red by the sun captured in remarkable footage.

The volcano came alive around 4pm local time on Tuesday, according to the Italian Institute of Geophysics and Volcanology, while the Volcanic Ash Advisory Center in Toulouse said the blast launched ash over 6 miles (10 kilometers) into the sky, warning of “very strong ash emission.”

Though the head of the National Institute for Geophysics and Volcanology in city of Catania, Stefano Branco, told local media that the eruption from Etna’s southeastern crater was “not at all worrying,” authorities in Catania nonetheless decided to close the city’s international airport as small stones and ash rained down on the area. The airport is located some 20 miles (31km) south of Etna.

Italy’s Central Emergency Department also noted it was closely monitoring and “guarding” the three villages closest to the volcano, Linguaglossa, Fornazzo and Milo, sharing an image of the discharge on Twitter. So far, no injuries or significant damage have been reported.

As the eruption began to subside around 7pm, lava could still be seen pouring down Etna’s slopes, while the massive ash column took on a reddish glow in the setting evening sun.

Tuesday’s activity marked Etna’s second eruption this week alone, with tremors increasing in the early hours of Monday before lava finally blasted from the volcano in the afternoon.

Standing nearly 11,000 feet (3,300 meters) tall, Mount Etna is one of Europe’s most active volcanoes, erupting dozens of times over the last century. Previous blasts have buried and destroyed homes, injured journalists and even threatened entire villages. Nevertheless, several communities have chosen to remain at the foot of the volcano, known for its scenic natural beauty and picturesque landscapes.