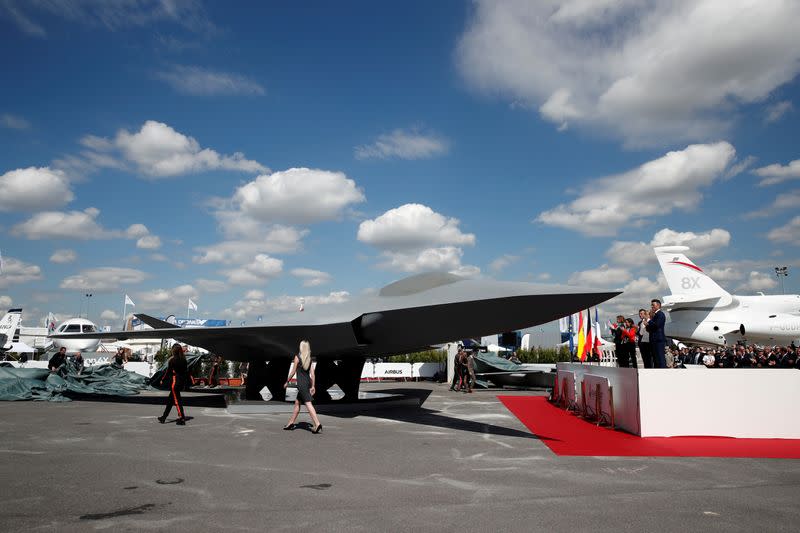 By Sabine Siebold and Tangi Salaün

BERLIN (Reuters) – Germany and France have launched a new effort to resolve an impasse over the development of a joint fighter jet, Europe’s biggest defence project that has sparked tensions between Berlin and Paris, security and industry sources said on Wednesday.

Dassault Aviation, Airbus and Indra are involved in the scheme to start replacing France’s Rafale and German and Spanish Eurofighters from 2040.

German Chancellor Angela Merkel and French President Emmanuel Macron kicked off the ambitious venture in 2017, when the EU was rattled by Britain’s decision to leave the bloc and deeply divided over other issues such as the migrant crisis. But it has become mired in mistrust and differing visions between Berlin and Paris as well as corporate infighting over workshare, the sources told Reuters.

At the beginning of February, Merkel and Macron failed to settle the issue, leaving open when the next tranche of payments of at least 5 billion euros can be released, insiders said.

On Wednesday, defence officials from France, Germany and Spain as well as Dassault, Airbus and Indra met in Paris to try to resolve the impasse, the sources said.

France, represented by Dassault, is seen as particularly sensitive about access to its nuclear-capable supply chain. Germany, whose interests are represented in the project by Airbus, wants an equitable industrial share, the sources said.

When Spain formally joined last year it further complicated the task of parceling out work, with two of seven topics seen deadlocked.

Before moving ahead, Germany aims to gain concessions from France, insiders said, adding Berlin would like to be able to use technologies co-developed with Paris for its own projects.

Disagreements run so deep that there are proposals to build two demonstrators instead of one, two sources told Reuters. Each would likely highlight different aspects of the FCAS project, which is designed to combine manned and unmanned warplanes.

“To be honest, it would be a lot easier for us to work with Britain because we share the same military culture,” the French politician said. Britain is running its own BAE Systems -backed fighter programme, Tempest, with Italy and Sweden.

A planned update for the Franco-German Tiger attack helicopter, worth over 5.5 billion euros, adds disagreements.

France is keen on the modernisation, but parts of the German military oppose any upgrade given the low operational readiness of the current Airbus model, sources said. On Thursday, French and German defence ministers will have another chance to solve the row in a scheduled virtual meeting.

(Reporting by Sabine Siebold and Tangi Salaun in Berlin; Additional reporting by Tim Hepher in Paris; Editing by Giles Elgood and Matthew Lewis)