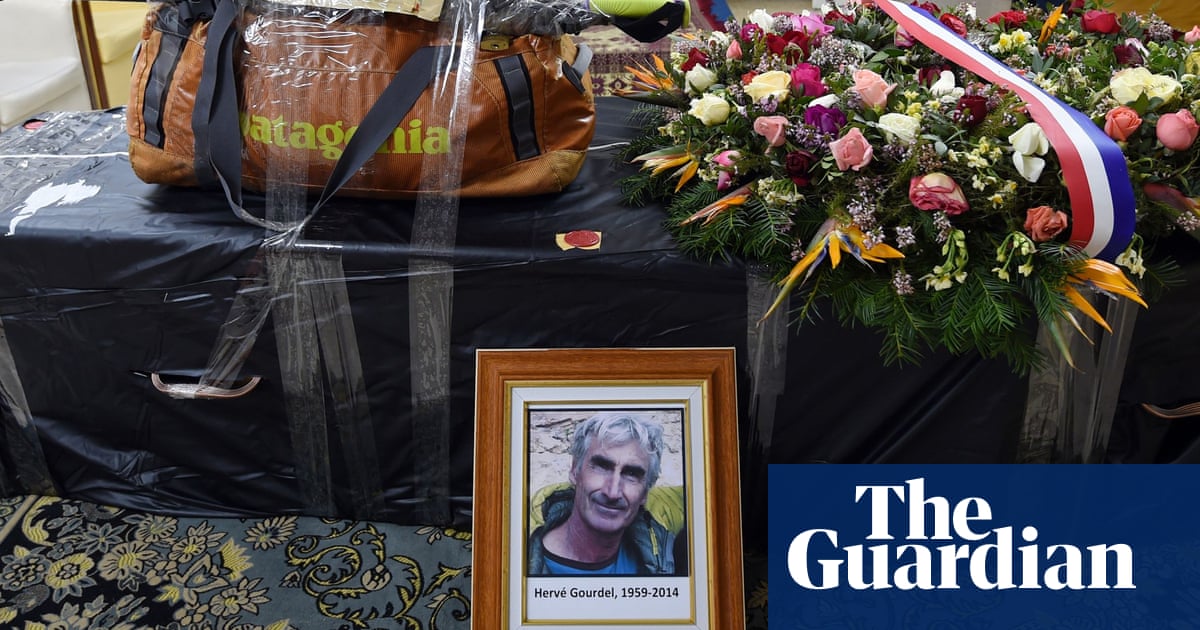 An Algerian court has handed a death sentence to a jihadist for the kidnapping and beheading of a French mountaineer six years ago, after a high-profile one-day trial.

The 2014 murder of Hervé Gourdel was claimed by a jihadist faction affiliated to the Islamic State group.

Gourdel, 55, was abducted while exploring the rugged massif in the north African nation’s Djurdjura national park, a draw for hikers, but also long a sanctuary for jihadists.

Three days after he disappeared, gunmen from the militant group Jund al-Khilafah – Soldiers of the Caliphate – published a gruesome video of his murder.

The trial opened on Thursday with 14 defendants, eight of whom were accused of being jihadists and were charged with Gourdel’s kidnapping and murder.

However, only one of the eight, Abdelmalek Hamzaoui, is in custody. The other seven were tried and sentenced to death in absentia.

On Thursday, Hamzaoui was brought to the court by ambulance in a wheelchair accompanied by a medical team and watched over by police special forces.

At the request of the defence lawyers, the trial opening had been delayed for two weeks due to his ill health.

Questioned by the judge, Hamzaoui denied having taken part in the abduction and killing of Gourdel, telling the court he was accused only to “close the case and please the French”.

Hamzaoui was found guilty and sentenced to death, though there has been a moratorium on executions in Algeria since 1993.

Members of Gourdel’s family, including his partner, Francoise Grandclaude, were in the public gallery.

“I find it very difficult to talk about him [Gourdel], we are still in shock,” Grandclaude said. “But I remember that there are a lot of inconsistencies in the words of the main accused.”

Six others also on trial, accused of failing to inform authorities promptly of Gourdel’s abduction, were all acquitted, according to an AFP journalist at the court.

Five were Gourdel’s climbing companions, who spent 14 hours in captivity along with him before being released.

Four of them formally identified Hamzaoui in court as being one of the kidnappers.

“I remember Herve’s last look as they were forcibly taking him away,” testified Hamza Boukamoum, one of his climbing guides.

“We tried to stop them, but they pushed us back, saying: ’You don’t care, he’s not a Muslim’.”

Their lawyers said they also were victims of the kidnapping, while a sixth man, whose car was stolen to transport Gourdel, was also cleared of charges.

Gourdel’s murder sparked outrage in both France and Algeria, where it triggered memories of the 1992-2002 civil war between Islamists and the army that left some 200,000 dead.

The murder came in the wake of the Islamic State group’s dramatic takeover of northern Iraq and Syria in the summer of 2014.

Adventure enthusiast Gourdel had travelled to Algeria at the invitation of his climbing companions to try out a new climb.

His kidnappers demanded an end to airstrikes against Isis in Iraq and Syria by a US-led coalition that included France. Paris had rejected their demand.

Gourdel’s body was not recovered until January the following year, after an operation involving some 3,000 Algerian troops. His remains were found in a booby-trapped grave.

In February, Grandclaude had welcomed the fact that the trial was “finally taking place”. Saying it was “very personal”, she said the process could offer “hope for the families and loved ones of victims affected by terrorism”.

Sorgente articolo:
Man sentenced to death in Algeria for beheading of French mountaineer – The Guardian