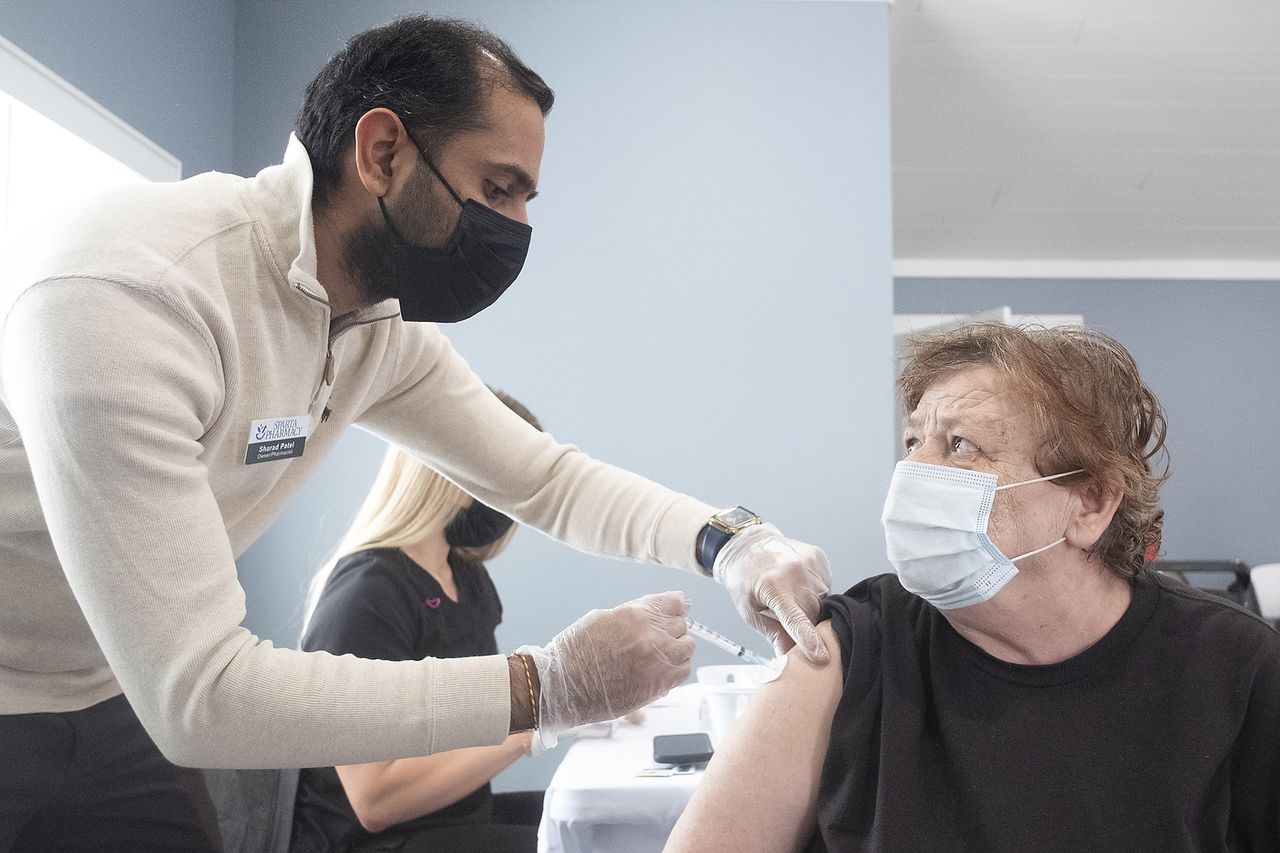 New Jersey on Thursday reported another 2,746 confirmed cases of the coronavirus and 89 additional deaths as winter weather both in New Jersey and throughout the country has caused delays in the shipment of vaccines and forced appointments to be rescheduled.

Gov. Phil Murphy announced the update on social media a day after he extended the state’s public-health emergency by 30 days for a 12th time — a move he said will help the state continue to roll out vaccinations as the second wave of the pandemic continues to show signs of waning.

The Garden State’s seven-day average for new confirmed positive cases is now 2,766, down 18% from a week ago and down 46% from a month ago.

The number of coronavirus patients in New Jersey’s hospitals fell for the 15th straight day, dropping to 2,327 as of Wednesday night. That’s down 40% from a recent peak of 3,872 on Dec. 22 and the fewest number of patients since Nov. 15.

The latest statewide rate of transmission is 0.91, the same as the day before. When the rate is below 1, that indicates the state’s outbreak is slowing. But the rate recently rose for six straight days after weeks of steadily declining.

New Jersey has now reported 675,713 confirmed coronavirus cases out of more than 10 million PCR tests in the more than 11 months since the state reported its first case March 4, 2020. There have also been 82,738 positive antigen tests. Those cases are considered probable, and health officials have warned that positive antigen tests could overlap with the confirmed PCR tests because they are sometimes given in tandem.

The state of 9 million people has also reported 22,721 residents have died from complications related to COVID-19 — including 20,432 confirmed fatalities and 2,289 considered probable. The state has reported 1,091 confirmed coronavirus deaths in February.

There have been 1,524,402 vaccine doses administered in New Jersey as of Thursday, according to the state’s dashboard. Of those, 1,086,763 were the first of two doses people will receive, while 436,988 were the second.

That’s out of more than 1.79 million doses the state has received from the federal government, according to a running tally by the federal Centers for Disease Control and Prevention.

The state’s goal is to vaccinate at least 70% of its adult population by the end of May. That’s about 4.7 million people.

Murphy warned Thursday the winter storm hitting the state — and the other parts of the country — could cause problems for vaccine supply and distribution in the coming days.

“Our anticipated deliveries will not arrive as scheduled,” he said during a morning news conference. “This may result in many appointments needing to be rescheduled.”

The storm shut down New Jersey’s vaccine mega-sites in Burlington, Middlesex, and Morris Counties, while the Bergen mega-site closed at 10 a.m. and the Gloucester County mega-site decided to close at 2 p.m., Murphy said. The site in Atlantic County remains open.

“If we continue to see especially hospitalizations continue to drop, there’s no question we’ll take more steps to open up,” Murphy said. “But I think we will be more cautious than we otherwise would have been absent the variants.”

Only one COVID-19 variant has been discovered in New Jersey — the one that emerged in the United Kingdom, state Health Commissioner Judith Persichilli said Wednesday. So far, the state has recorded 50 cases of the variant, Persichilli said. Health officials say vaccines appear to be effective against the U.K. variant, but the strain is more contagious than the typical coronavirus strain.

COUNTY-BY-COUNTY CASES (sorted by most new)

There were 2,327 patients hospitalized with confirmed or suspected COVID-19 cases across New Jersey’s 71 hospitals as of Wednesday night — 43 fewer than the previous night.

That included 474 in critical or intensive care (58 more than the previous night), with 306 on ventilators (three fewer).

There were also 308 COVID-19 patients discharged Wednesday, according to the state’s dashboard.

New Jersey has reported 144 in-school coronavirus outbreaks, which have resulted in 686 cases among students, teachers, and school staff this academic year, according to the state’s dashboard.

Outbreaks — defined as cases in which people were confirmed to have caught or transmitted the virus in the classroom or during academic activities — have been reported in all 21 counties, according to the state’s dashboard.

Those numbers do not include students or staff believed to have been infected outside school or cases that can’t be confirmed as in-school outbreaks. Though the numbers keep rising every week, Murphy has said the school outbreak statistics remain below what state officials were expecting when schools reopened for in-person classes.

New Jersey defines school outbreaks as cases where contact tracers determined two or more students or school staff caught or transmitted COVID-19 in the classroom or during academic activities at school.

There are about 1.4 million students and teachers across the state, though teaching methods amid the outbreak have varied, some are in-person, some are hybrid and others are all-remote.

At least 7,867 of the state’s COVID-19 deaths have been among residents and staff members at nursing homes and other long-term care facilities.

There are currently active outbreaks at 381 facilities, resulting in 6,887 active cases among residents and 7,011 among staffers.

As of early Thursday afternoon, there have been 109.6 million positive COVID-19 tests across the world, according to a running tally by Johns Hopkins University. More than 2.4 million people have died from coronavirus-related complications.

Thank you for relying on us to provide the journalism you can trust. Please consider supporting NJ.com with a subscription.

Brent Johnson may be reached at bjohnson@njadvancemedia.com.