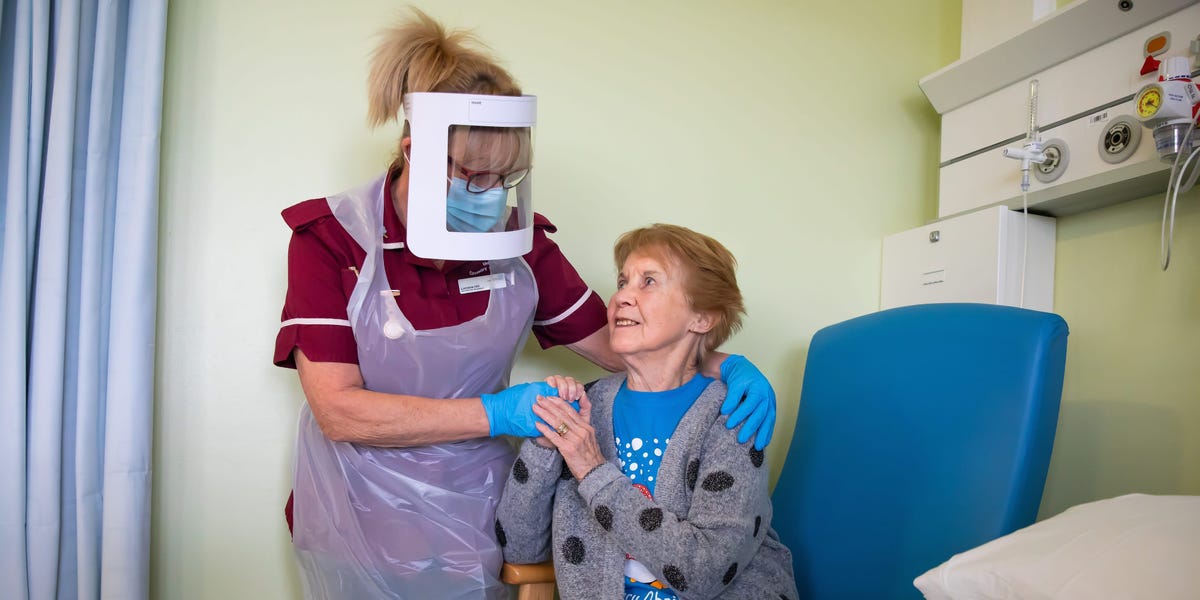 Pfizer-BioNTech’s COVID-19 vaccine produces a weakened immune response against the contagious variant found in South Africa, which has now also been identified in the US, a new study has suggested.

The vaccine generated a less powerful immune response against a lab-made coronavirus designed to mimic the variant found in South Africa, known as B.1.351, than against the original strain, the companies announced Wednesday .

There was approximately a two-third reduction in how well antibodies produced by Pfizer’s vaccine fought against a lab-made variant, according to correspondence published in the New England Journal of Medicine.

The lab-made variant had the exact same spike protein — the part of the virus that it uses to infect cells, and the target for existing COVID-19 vaccines —  as the variant, which has now been found in 35 countries and multiple US states.

The study’s authors said that it was “unclear” what this reduction in antibody “neutralization” response actually means for how well Pfizer’s vaccine protects against COVID-19 caused by B.1.351 in real-life.

Pfizer and BioNTech’s vaccine was 95% effective at protecting against the original coronavirus in trials conducted in 2020, and was the first COVID-19 vaccine approved in many countries, including the US and UK. Pfizer and BioNTech have said they aim to manufacture approximately 2 billion doses in total by the end of 2021.

B.1.351 was first detected in South Africa in samples dating back to October 2020, and has spread to 35 countries worldwide, including to the UK and US. There are eight reported cases of people infected with the variant in the US, according to GISAID, but the true number could be higher.

The variant is thought to be 50% more contagious than original coronavirus variants. Lab-studies have shown that B.1.351 sometimes escapes the antibodies produced by people previously infected with coronavirus. The impact of this phenomenon on vaccines’ effectiveness is not yet clear.

Scientists from US drug giant Pfizer and the University of Texas Medical Branch (UTMB) tested blood samples from 15 people who had received Pfizer-BioNTech’s vaccine against three lab-made pseudoviruses, and compared the response against a strain circulating in the US in January 2020.

The technique was very similar to a previous experiment from the same scientists, which showed Pfizer’s vaccine worked less well against some of the mutations on variants found in the UK and South Africa.

The experiment’s methods and conclusions have not been scrutinized by other experts in a peer review.

The study was small, and measured only antibodies, which are one aspect of the immune response.

Pei-Yong Shi, UTMB professor and study co-author, told Reuters that there is no “cut off line” for how large the antibody response has to be to protect against the virus. He said that he suspected the immune response observed in the study was likely to be significantly above where it needs to be to provide protection against COVID-19.

Shi said that, even if the concerning variant significantly reduces effectiveness, the vaccine should still help protect against severe disease and death. Shi said that more work was needed to fully understand whether the vaccine works against the variant in South Africa, including clinical trials and the development of a benchmark to determine the antibody levels that are protective.

The blood samples were from 15 people who were immunized in Pfizer’s late-stage trial and received two doses, 21 days apart. We therefore don’t know whether the same results apply to people who have their second dose outside of this timeframe.

To figure out whether the vaccine will work against coronavirus variants in real-life, the world’s eyes are on Israel, because the country has rolled out Pfizer’s vaccine to two-thirds of its population. Israeli officials have said the vaccine has been 90-95% effective against the variant in the UK, B.1.1.7, but it was “too early” to say anything about the variant in South Africa, per Reuters.

Even if it doesn’t work so well, the vaccine could be updated and tailored to new variants. BioNTech has said it could make a new vaccine in six weeks, per the Financial Times. Or you may be able to get a protective booster shot.

It is not clear from other vaccines how well they work against the variant in South Africa.

COVID-19 vaccines from Johnson & Johnson and Novartis, which are not yet approved, were less effective in clinical trials in South Africa.