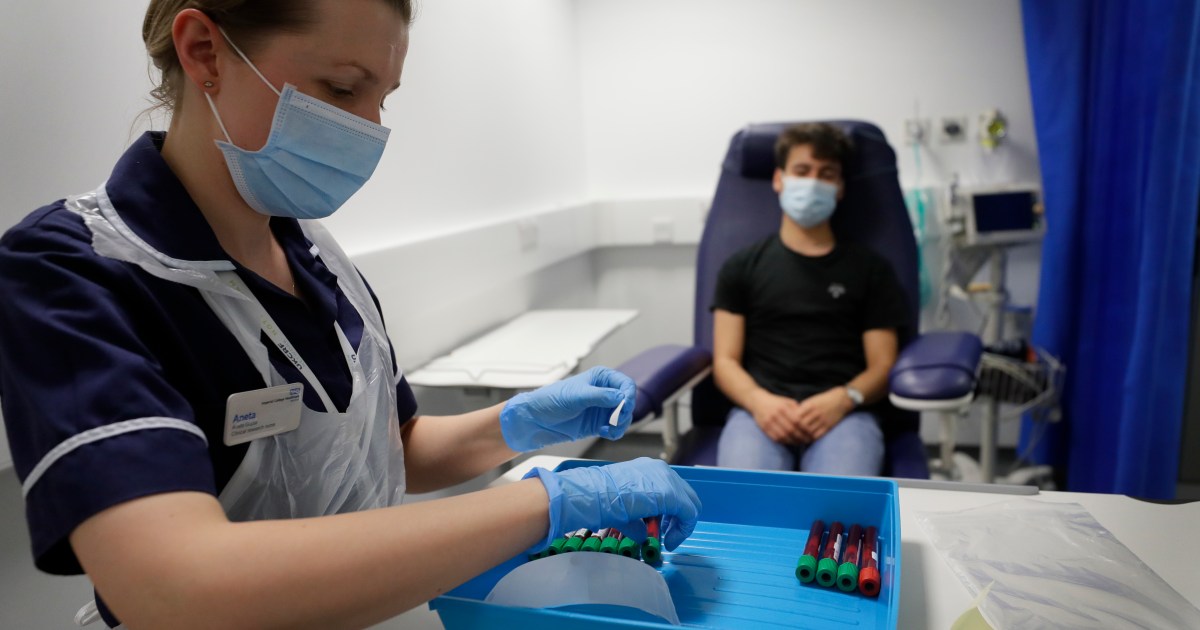 As part of a government-backed ‘human challenge’ study, up to 90 young people will be exposed to the coronavirus.

The United Kingdom is set to become the first country in the world to deliberately expose volunteers to the novel coronavirus in a so-called human challenge study hoped to eventually aid the development of vaccines and treatments.

Up to 90 healthy volunteers aged between 18 and 30 will be exposed to the virus in a “safe and controlled environment” during the trial, which will begin within a month, the Department for Business, Energy and Industrial Strategy (BEIS) said in a statement on Wednesday.

The UK’s clinical trials ethics body has approved the study, which will use the lowest amount of virus needed to cause an infection, BEIS said.

Imperial College London’s Chris Chiu, the trial’s chief investigator, said the aim of the initial work will be “to understand how the virus infects people and how it passes so successfully between us”.

Participants will be exposed to the original, first-wave strain that has been circulating in the UK since March 2020. The variant has been shown to be of low risk in healthy young adults.

Volunteers will be screened for possible health risks before being allowed to take part, and kept in quarantine for close monitoring by medical staff for at least 14 days in a specialist unit at London’s Royal Free Hospital.

Participants will get compensation payments of around £88 ($122) per day for the duration of the study, which will also involve follow-up monitoring for a year.

The government has invested £33.6 million ($46.6m) in the research, which is being managed by the UK government’s Vaccine Taskforce, Imperial College London, the Royal Free London NHS Foundation Trust and hVIVO, a company that has pioneered viral human challenge models.

“We expect these studies to offer unique insights into how the virus works and help us understand which promising vaccines offer the best chance of preventing the infection,” said Clive Dix, the interim chair of the Vaccine Taskforce.

Similar studies in the past have played a critical role in the development of treatments for other diseases, including malaria, cholera and the flu.

John Ashton, a former regional regional director of public health for the North West of England, said the trial was a “very important” step towards better understanding “the inter-relationship between the virus and the people who are exposed to it” and expressed confidence over the safety of the research.

“These experiments will be conducted in a highly-controlled clinical environment so that if any of the volunteers do get adverse effects they can be treated very promptly,” Ashton told Al Jazeera.

“And of course the treatment options have now improved a lot since the pandemic first turned up,” he said.

The UK has recorded more than four million cases of COVID-19 since the erupted. Nearly 120,000 people have died nationwide, marking one of the world’s worst death tolls.

Concerns are mounting as a mutation known as the Kent variant rips through the country, a development which prompted British Prime Minister Boris Johnson to enforce a third national lockdown on January 4.

But Johnson’s government has won praise by moving quickly to vaccinate more than 15 million people with at least one dose of the two jabs currently in use in the country – produced by Oxford-AstraZeneca and Pfizer-BioNTech respectively – since December 8.

The UK’s medicines regulator has also approved the use of the inoculation produced by Moderna, although supplies of that vaccine have not yet been delivered.