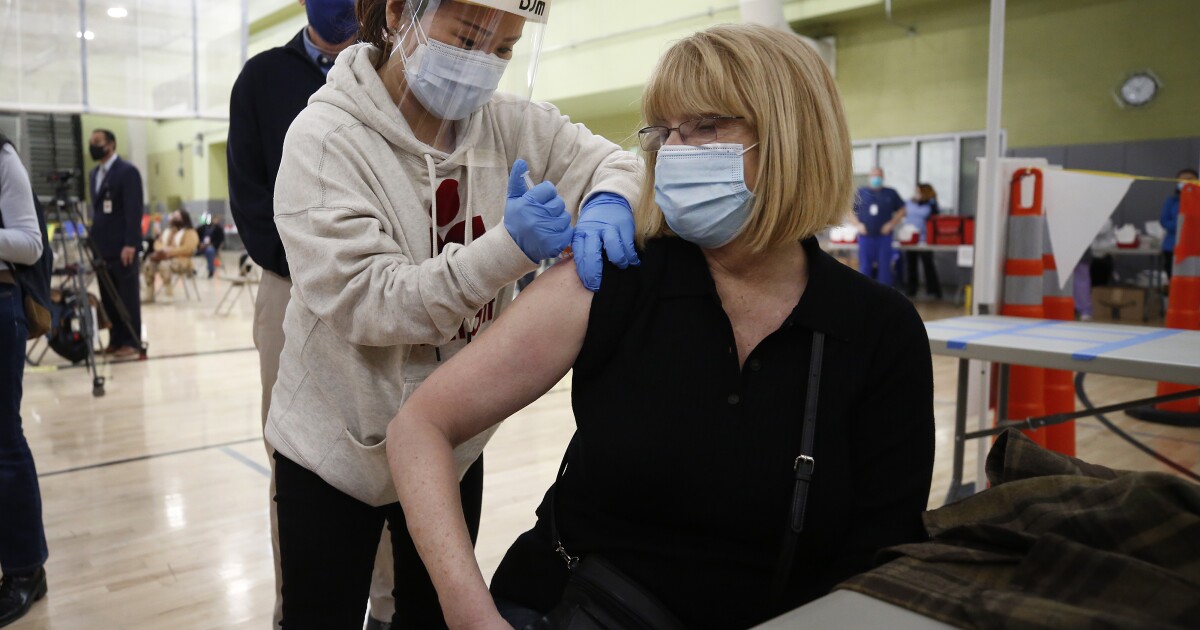 The stream of COVID-19 vaccine is swelling slightly in California but remains a trickle for those trying to get their first dose, according to officials.

Forecasts discussed Wednesday showed California should receive 1.28 million vaccine doses next week and 1.31 million the week after. Both those figures are up from the state’s last shipment, which was about 1.08 million.

The expected uptick, though welcome, won’t come close to the supplies necessary to clear California’s existing vaccination queue — let alone handle the millions more who will become eligible to receive the shots roughly a month from now.

“What we need is more manufactured supply,” Gov. Gavin Newsom said this week.

A consistent challenge for California and the rest of the country is that both currently available COVID-19 vaccines, one from Pfizer-BioNTech and the other from Moderna, require two doses, administered three and four weeks apart, respectively.

Lately, the need to provide second shots has spurred officials throughout the state to greatly limit — or outright suspend — access to first doses.

Of the roughly 2.6 million total doses California is slated to receive in its next two shipments, only about 1.34 million are expected to be available for first doses, according to figures presented during Wednesday’s meeting of the state vaccine advisory committee.

“Dedicated allocation seems to be increasing, so keep your fingers crossed that it continues to go in that direction,” said Dr. Tomás Aragón, California’s public health officer and director of the state Department of Public Health.

It’s unclear how those doses will be divvied up throughout the state. On Wednesday, Los Angeles County Public Health Director Barbara Ferrer said she did not have an estimated allocation for the next two to three weeks.

“We still have a fair amount of variability in what we get from week to week,” she said.

As long as the number of vaccines being shipped remains inadequate, however, officials will face a quandary: Should they administer a large number of first doses when supplies are available, knowing that could lead to constraints down the line, or try to reserve shots week by week to ensure that people get both doses in their two-shot regimen?

“I’ve been up and down this state, large cities, small communities … other communities on the coast, large-scale sites at Dodger Stadium and Petco Park, up in Santa Clara at Levi’s Stadium,” Newsom said during a briefing Wednesday in the city of Coachella. “End of the day, we’re throttling back many of those sites because of those constraints on supply.”

More vaccines, however, are on the way. President Biden announced earlier this month that the U.S. had secured contractual commitments from Moderna and Pfizer to deliver 600 million doses of vaccine by the end of July.

U.S. drug regulators are also vetting another vaccine candidate from Johnson & Johnson that requires only one dose.

“That’s extraordinarily encouraging, but June, July is not March and April,” Newsom said. “And so, over the course of the next number of weeks, we’re going to have to be honest with folks about what we can and what we can’t do.”

Another new and unwelcome wrinkle in the vaccine rollout is the winter storms that are walloping other parts of the country.

Although California has largely avoided the deep freeze, officials said this week that harsh conditions elsewhere could affect shipments of new doses.

In Los Angeles, the winter storm-related delays will affect about 12,500 appointments at vaccine sites run by the city, such as Dodger Stadium, Mayor Eric Garcetti said Thursday.

Two shipments have been held up because of the inclement weather: 26,000 doses, previously set to arrive on Tuesday, are still in Kentucky, and another 37,000, set to be used next week, are in Tennessee, L.A. officials said in a statement.

“Severe weather across the country has disrupted travel and shipping nationwide, including delaying the delivery of our vaccines,” Garcetti said in the statement. “Our city is ready to administer COVID-19 vaccines swiftly, safely, and equitably — and as soon as doses arrive in Los Angeles, we will get them into people’s arms immediately.”

The weather has so far not affected L.A. County-run vaccination sites, which include Pomona Fairplex, the Forum, Cal State Northridge, the county Office of Education and Six Flags Magic Mountain.

“Los Angeles County continues to vaccinate eligible people who have appointments for second doses at the County-operated sites. It is not yet known what, if any, impact will be felt into next week. We will provide information to the public as we learn more,” the county’s Public Health Department said Thursday.

Jeff Zients, who leads President Biden’s COVID-19 task force, said during a news briefing Wednesday that the weather was having an impact on delivery and distribution companies.

“People are working as hard as they can given the importance of getting the vaccines to the states and to providers,” Zients said, “but there is an impact on deliveries.”

San Diego County Supervisor Nathan Fletcher said during a weekly COVID-19 update that the supply lines to the locations where Pfizer and Moderna made their vaccines were simply frozen at the moment. The main manufacturing facilities for the nation’s two coronavirus vaccines are in Massachusetts and Michigan.

“Both of those, along with the routes from there to here, have been impacted by the snow and the winter weather conditions we’re seeing throughout the country,” he said. “This is going to impact our ability to administer vaccines this week.”

In Orange County, officials had to temporarily shutter their vaccine super site at Disneyland after an expected delivery of Moderna vaccines did not arrive Tuesday.

That site will close Thursday through Monday, officials said. Another location at Santa Ana College also will close temporarily starting Saturday, and its reopening will depend on supply.

A representative from the California Department of Public Health could not immediately say on Thursday how wide the vaccine disruption was but confirmed that California was “among the states that have been affected by delays.”

Officials in Fresno County said 7,800 Moderna doses had been tied up because of weather conditions and had not been delivered as of Thursday morning.

“We do not have a date of when these doses will be delivered at this time,” Joe Prado, community health division manager with the county Department of Public Health, said in a statement. “We are working with medical providers in the community to provide them the necessary doses from our supply this week to avoid cancellation of appointments.”

Some vaccination appointments also had to be rescheduled in Santa Barbara County this week after an expected allotment of Moderna vaccine was “delayed due to severe weather conditions across the country,” officials said in a statement.

As of Wednesday, more than 1.45 million Californians had been fully vaccinated against COVID-19, according to Aragón. More than 6.4 million total doses have been administered throughout the state.

California reported Tuesday that over 1.5 million received doses had not yet been used — though officials said those might be reserved for already scheduled appointments, or the figure could be lower if the doses had not yet been tracked in the state’s data collection system, which relies on local providers’ individual reporting.

In L.A. County, more than 1.5 million doses have been administered to eligible residents and nearly 400,000 individuals have been fully vaccinated, according to Ferrer.

Officials have continued to preach patience in the face of the limited vaccine supply, particularly as millions more individuals become eligible to get the shot next month.

Starting March 15, people ages 16 to 64 who are disabled or at high risk for morbidity and mortality from COVID-19 will be able to schedule vaccination appointments.

Most California counties are currently vaccinating people who work in healthcare, live in long-term-care facilities or are 65 or older. As supplies allow, local agencies also can administer doses to educators and child-care workers; food and agriculture workers, including grocery store employees; and law enforcement personnel and other emergency responders.

Amid the continuing supply crunch, officials are ramping up resources in preparation for larger allocations in the future — though it’s unclear when that aspiration will become reality.

Ferrer said Wednesday that she believed March could be another difficult month for vaccine allocation but that circumstances would improve in April as additional doses became available.

Whenever the expected influx occurs, state and local health officials say they’ll be ready for it.

“Our ability to vaccinate residents and workers,” Ferrer said, “just depends at this point on the availability of us having enough vaccine, because we have many different sites that can meet the varied needs of our population.”