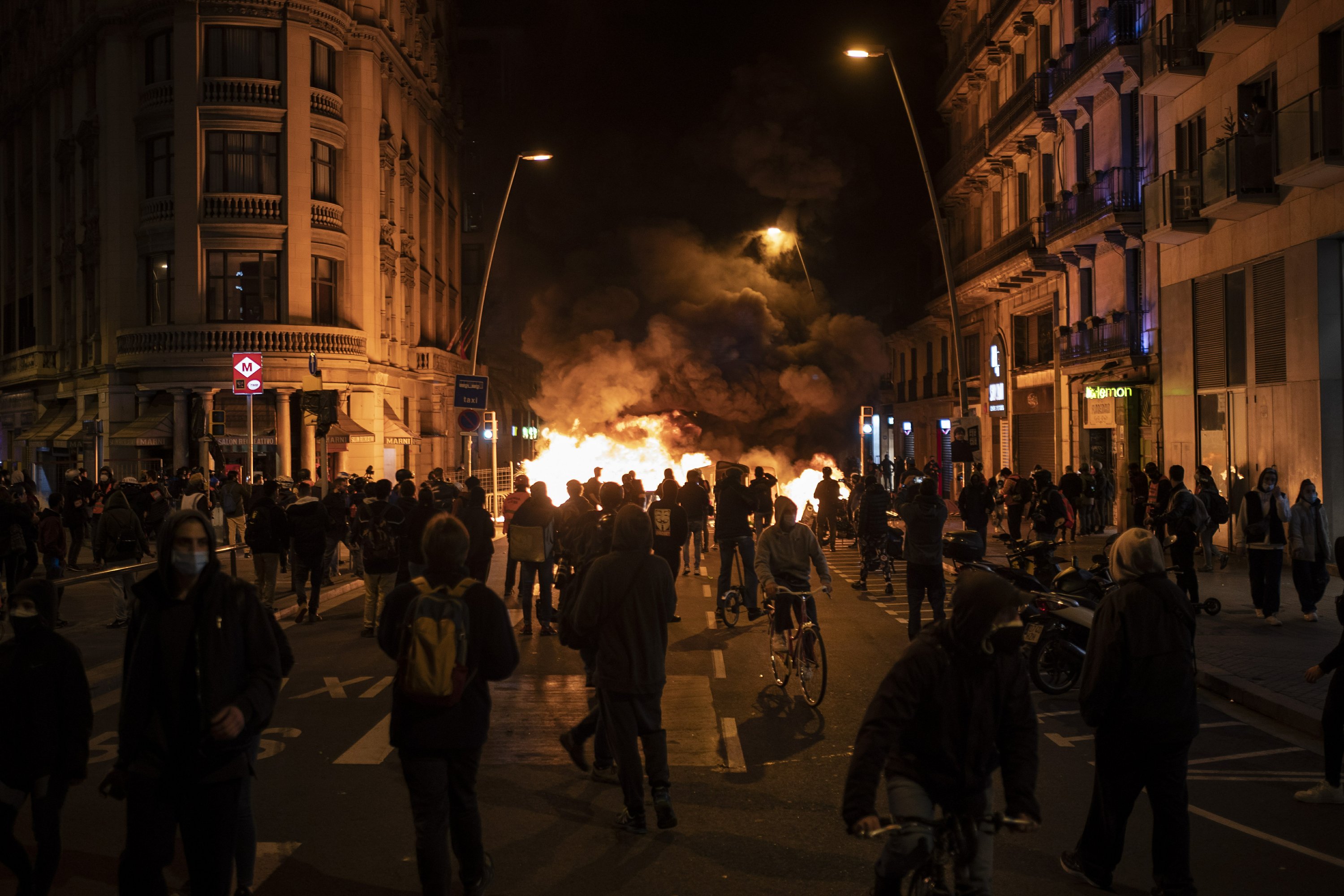 MADRID (AP) — More than 50 people were arrested and dozens injured during a second night of protests that turned violent in several Spanish cities. The protests were sparked by the imprisonment of a rapper who had insulted the monarchy and praised terrorism.

The protests began peacefully late Wednesday in dozens of Spanish provincial capitals and other towns in the northeastern Catalonia region, home to the rapper Pablo Hasél. But as the evening wore on they turned violent, with rioting, impromptu barricades made from trash containers and fires, and damage to shops.

In the Spanish capital alone, police arrested 19 people, including six minors. Emergency services assisted 35 injured anti-riot officers and 20 others, including protesters and people who passed by and were caught in the melee.

In Barcelona, 29 people were arrested and at least eight were injured and sent to hospitals, the regional emergency service said Thursday. The night before, a young protester lost an eye night as a result of a foam projectile used by the regional Mossos d’Esquadra police to dispel the protesters.

At least four protesters were also arrested Wednesday in the southern city of Granada.

Some of the gravest riots on Wednesday night took place near the Lleida prison, where Hasél was taken Tuesday. Police arrested him at a university building where he had barricaded himself 24 hours earlier to draw attention to his arrest.

The rapper and his supporters say that Hasél’s nine-month sentence for writing a critical song about former King Juan Carlos I and dozens of tweets that judges said glorified some of Spain’s extinct terrorist groups violates free speech rights.

Potentially deepening the tension, court authorities in the northeastern region of Catalonia said Thursday that Hasél lost a recent appeal and is looking at an additional prison sentence of 2 1/2 years for obstructing justice and assault in 2017. The sentence can be appealed again before a higher court.

Besides that case, the rapper has previously faced other charges for assault, praising armed extremist groups, breaking into private premises and insulting the monarchy.

His legal situation has drawn considerable public attention because it comes on the back of a string of other artists and social media personalities that have been put on trial for violating Spain’s 2015 Public Security Law, which was enacted by a previous conservative-led government and criticized by human rights organizations.

Spain’s left-wing coalition government wants to change the country’s criminal code to eliminate prison terms for offenses involving freedom of speech, especially when it comes in the form of artistic expression. The junior member of the coalition, the far-left United We Can (Unidas Podemos) party, has said it will work to grant a pardon to Hasél.

The riots have led to a new political storm in Spain, with the opposition lambasting United We Can for not expressing a strong condemnation of the street violence.

Deputy Prime Minister Carmen Calvo, a member of the center-left Socialist Party that leads the country’s governing coalition, also criticized a United We Can spokesman who expressed support for what he called “antifascist protesters fighting for freedom of expression.”