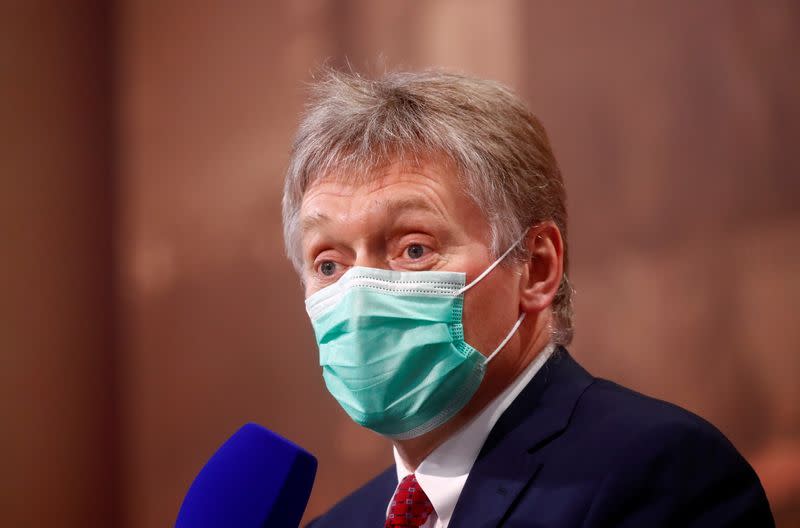 MOSCOW (Reuters) – The Kremlin said on Friday it hoped the United States and European Union would fall back on common sense and resist calls to impose new sanctions on Moscow over its treatment of opposition politician Alexei Navalny.

The administration of U.S. President Joe Biden is expected to name as early as Friday companies it believes are helping build Russia’s Nord Stream 2 gas pipeline to Germany, according to sources, a move that could prompt sanctions on the nearly completed project.

Diplomats have also said that the European Union is set to impose travel bans and asset freezes on allies of Russian President Vladimir Putin in March in response to the jailing of Navalny this month by a Russian court.

“We still hope that our interlocutors’ common sense approach to the situation will prevail and we will not go further down the path of sanctions pressure, which has already repeatedly demonstrated its inefficiency,” Kremlin spokesman Dmitry Peskov told reporters on a conference call.

The European Court of Human Rights said on Wednesday that Moscow should immediately free Navalny, whose arrest and jailing sparked street protests in cities across Russia.

The Kremlin said such a call amounted to unacceptable meddling in its internal affairs.

Navalny was arrested last month upon returning from Germany following treatment for poisoning with what many Western countries say was a military-grade nerve agent.

Putin, who makes a point of never uttering Navalny’s name, has said Russian state security agents would have “finished the job” if they had wanted to kill Navalny who he suggested was not important enough to eliminate.

The Kremlin has questioned whether Navalny was poisoned at all and denied any Russian state involvement if he was.

Navalny, 44, was jailed on Feb. 2 for alleged parole violations that critics say were politically motivated charges.