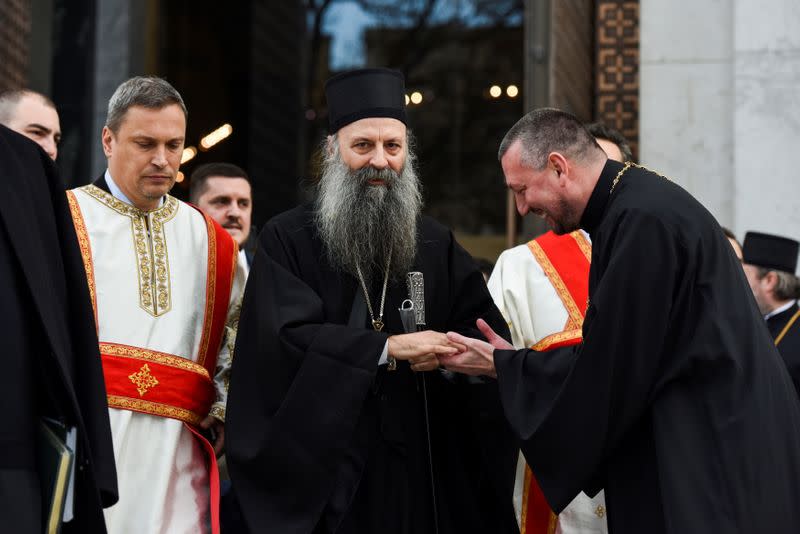 BELGRADE (Reuters) – Hundreds, including top officials and clergy gathered in Belgrade on Friday to mark the enthronement of Porfirije, the new Patriarch of the Serbian Orthodox Church, a day after his election.

Porfirije, 59, Serbia’s 46th Patriarch is seen as a modernist inside the conservative church. He is the successor to Patriarch Irinej, who died in November from COVID-19 at the age of 90.

Porfirije will lead a church of about 12 million people in Serbia, the other five former Yugoslav republics, Kosovo, and dioceses in the United States, Australia and Western Europe.

Flanked by bishops in their ornate robes, Porfirije was handed over a crosier, a stylized staff that is a symbol of his office and a white stiff hat.

Another part of the enthronement will be Porfirije’s takeover of the throne at the Pec monastery in Kosovo, the medieval seat of Serbian Orthodox patriarchs and it is expected in the coming weeks.

In a sermon, Porfirije said that Kosovo, Serbia’s former southern province, mainly populated by Albanians, would remain in the focus of the church’s policies.

“Kosovo is for us … an umbilical cord that links us with the essence of our identity,” he said.

Serbs and their church regard Kosovo as the cradle of their Orthodox Christianity and it is the home to some of their most important religious sites.

Belgrade lost control over Kosovo in 1999 after NATO bombed its forces to end a bloody counterinsurgency against Albanians there.

The church and the government in Belgrade enjoy the backing of Russia, a traditional Slavic and Orthodox Christian ally, in their refusal to recognise independent Kosovo.

Serbia is a European Union membership candidate, but before it joins the bloc, it must mend ties with Kosovo and allow it to join international bodies, including the United Nations.

Most in the crowd, including Porfirije, did not wear face masks, despite a surge in coronavirus infections in the country.