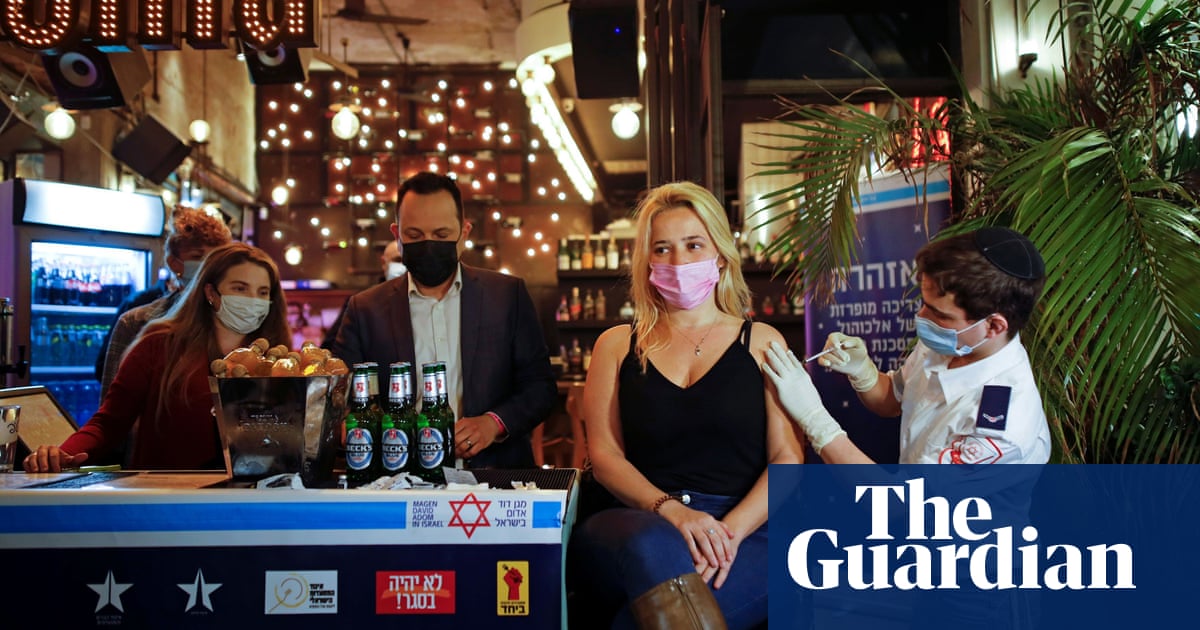 Israel is preparing itself to be split in half from next week, with the government creating a new privileged tier in society: the vaccinated.

Nearly 50% of the population who have chosen to be inoculated against Covid will be provided with a “green pass” a week after their second shot, as will those with presumed immunity after contracting the disease.

From Sunday, the pass will grant access to gyms, hotels, swimming pools, concerts, and places of worship. Restaurants and bars will be included from early March.

For the rest, including children under 16 who are not eligible for coronavirus shots, many of the activities shut down during the year-long crisis will remain off-limits, although some will be available if they provide a negative coronavirus test.

“This is how the first stage will look in the return to your almost normal lives,” the health minister, Yuli Edelstein, said this week. The pass is being launched on a mobile app that businesses must scan on entry, and many Israelis are excited.

Itamar Weinberg, 18, had been hoping 2020 would be a year to escape the country for a break, as he is due for military conscription this year. He had planned last summer to go on safari in Tanzania.

Weinberg said he was anxiously awaiting the reopening. “I want my last few months of freedom before enlisting into the army to be ones filled with late-night bar hopping and quintessential teenage adventures.”

Israel’s record-setting vaccination drive has been watched by other governments that see it as a test case for what lies ahead. Initial data indicates the jabs are extremely effective at reducing infections and hospital admissions in the country of 9 million.

The green pass policy is the next step, although it remains untested.

How Israel will properly implement the scheme is yet to be seen. Three lockdowns have seen often flagrant violations of the rules, with many frustrated cafe managers and shop owners opening despite bans. Those same businesses will be assigned the task of enforcing who comes in or stays out.

The health ministry is also concerned vaccination documentation could be faked and has warned that anyone caught with a false certificate could be fined 5,000 shekels (about £1,000).

Meanwhile, with limited information on how vaccinated people could still transmit the disease, there remains concern around how the move could lead to more contagion.

One hotel near the Sea of Galilee, the Hagoshrim Hotel and Nature, said it planned to open its swimming pool and gym to the public on Sunday.

“Of course, the main problem will be with minors,” said the hotel director, Armin Grunewald, 53. “They can’t be vaccinated. So in order to come twice a week to the gym or to the pool, they will have to be tested twice a week. It sounds problematic.”

While the green pass is an interim method to reopen the economy, it serves another purpose in a country where all over-16s can get vaccinated for free – persuading people who have held off so far to get a jab. Daily vaccination rates had dropped this month but started gathering pace again this week as details of the new pass were released.

The owner of Cafe Kalo in West Jerusalem said he was confused about how the green pass would work but supported it in principle.

“If you are not vaccinated, you are not respecting me, so why should I respect you?” said Yaacov Ben Elul, 60 and vaccinated. “You are endangering me and the rest of the people.”

Israel has made tentative plans for the green pass to eventually allow vaccinated people to go on holiday without self-isolating. It signed accords with Greece and Cyprus for a trial run in the spring. However, how that will work is still being discussed. The vaccination certificate was rebranded as green pass this week, rather than “green passport”, which might have suggested it was already useful for international travel.

Vaccination privileges have been considered in multiple countries, but the idea has often prompted a backlash from privacy campaigners and rights groups. Germany’s ethics council, an independent body that advises the government there, has recommended that no special conditions be granted to the inoculated, which said it might encourage an “elbow mentality” that could lead to unrest.

With an already highly unequal international vaccination push, green passes, especially if they relate to travel, would see citizens of richer, more powerful nations first to enjoy the benefits.

Israel is already facing pressure over its vaccination campaign. Millions of Palestinians living under its control in the occupied territories are onlynow receiving the first batches of limited doses.

In Israel, Avichai Green, 32, said he had not been vaccinated as, among other things, he did not trust his government to be transparent. He said the green pass was a “dangerous” step and a “slippery slope”.

“It is something that didn’t exist here before,” he added. “It will create a separation among the people.”