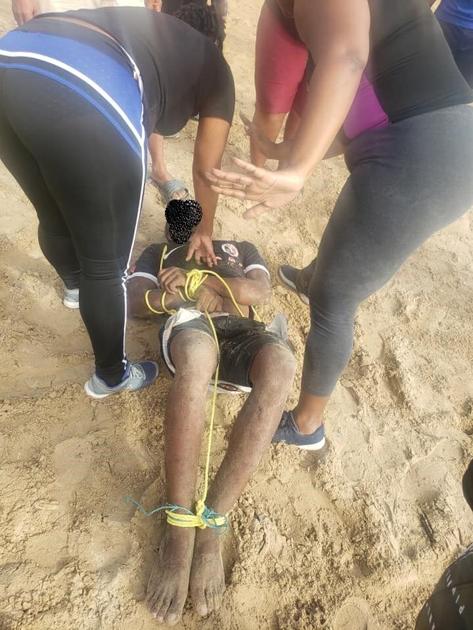 A Mayaro ‘thief’ who targeted a group of fitness enthusiasts on the beach had the tables turned on him on Saturday.

The 20-year-old man, of Sham Road, was subdued, tied up and handed over to police.

In a post on social media, one of the women in the fitness group related the ordeal.

She wrote, “People we are safe no where yuh know…this morning my fitness crew and I went to Mayaro beach to train and this man attempted to rob my trainer and steal things items that was left on the sand while we ran the length of the beach at approximately 9:30am. Well who tell him to do that? “

The social media user said that the suspect attempted to steal her trainer’s phone, but was no match for the trainer whom, she described as a trained fighter, of Maloney.

The fitness session turned into a self-defense class as the trainer subdued the suspect by placing him in a headlock, then wrested him to the floor.

The woman said that the trainer sought to counsel the suspect by asking him why he was on the beach stealing.

“He told (the trainer) ‘well boy things are a little tough with me and (the trainer) still gave him $40 and told him to leave. Well the mistake this man made was to run back and try to grab my trainer’s daughter phone had the child screaming. Well alyuh know d mad blood fly up in (the trainer) head?”, the post read.

Together with a female trainer, they subdued the suspect again and tied him with a length of rope “like a market crab”.

Mayaro police responded and took the suspect into custody.

He was taken to the Mayaro Police Station and faces charges of larceny.