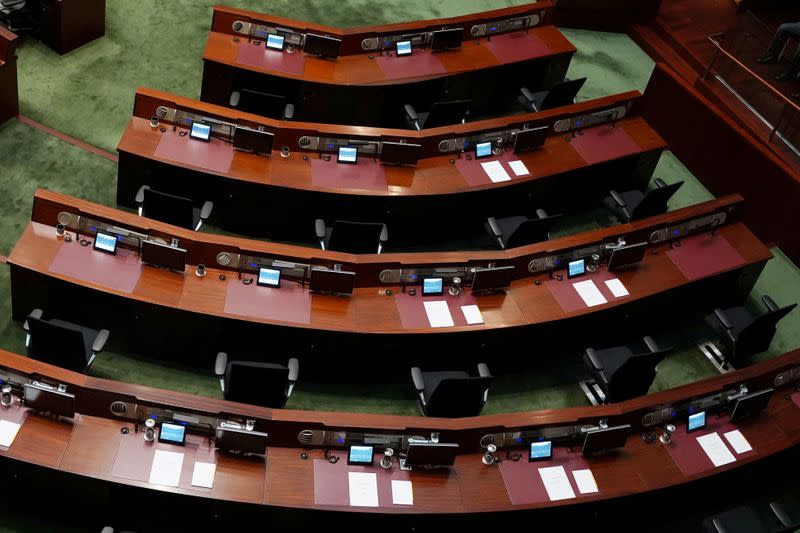 BEIJING (Reuters) – “Loopholes” in Hong Kong’s laws must be closed to ensure the city is governed by “patriots”, a top Beijing official said on Monday, signalling changes to the Chinese-ruled city’s electoral system, potentially as early as next month.

Any changes could further limit who could run in a postponed legislative election and may lead to the disqualification of most lower-level district councillors – the majority of them being pro-democracy politicians, sources have told Reuters.

Reforms could also further skew a committee electing the city’s leader in favour of the pro-Beijing camp.

“Patriots” included those who loved China, its constitution and the Communist Party and excluded anti-China “troublemakers”, said Xia Baolong, director of the Hong Kong and Macao Affairs Office of the State Council, China’s cabinet.

One direct reason for “anti China” movements in Hong Kong was that the principle of patriots ruling the city was not fully implemented, Xia said.

“Relevant legal loopholes” should be plugged to improve Hong Kong’s electoral system and ensure only patriots gain important office, said Xia, according to a transcript of his remarks posted online by his office.

Those who violate the national security law, or challenge the leadership of the ruling Communist Party, are not patriots, he said, referring to the contentious legislation Beijing imposed on its freest city in June last year.

“Under no circumstances should important positions be held by elements who are anti-China or who bring chaos to Hong Kong.”

A Hong Kong deputy to China’s parliament, which is due to congregate from March 5, said that it was likely a “detailed electoral reform plan” for the city will be brought up this year, according to a tweet from the Global Times, a tabloid published by the official People’s Daily, on Monday.

The “patriotism” requirement for the city’s fiercely independent judiciary would be of particular concern for many in Hong Kong, as its common law-based system has been key to establish the city as a global financial hub.

“You have to be a very firm and decisive patriot to the extent that you’re prepared to put in every effort to defend “one country, two systems,” regardless of your personal sacrifices,” Lam said, referring to the semi-autonomous city’s style of governance.

(Reporting by Gabriel Crossley in Beijing and Clare Jim in Hong Kong, Editing by Anne Marie Roantree and Raissa Kasolowsky)