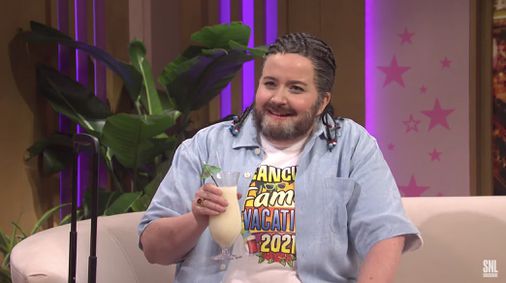 The cold open began with Britney Spears (played by Chloe Fineman) — who has also received widespread media attention as of late for a renewed focus on her conservatorship battle — introducing audience members to her show, “Oops, you did it again,” which she created so that “people could come on and apologize for things they did wrong.”

As the beat from Spears’ “Toxic” played in the background, on walked Cruz (played by Aidy Bryant) to the set — sporting braids finished with red and white beads, a scraggly beard, and a t-shirt emblazoned with the slogan “Cancún family vacation 2021.” Also in hand was a frozen beverage and a black suitcase.

When Fineman commented on the senator “looking tan,” Bryant responded, “Oh, no, I’m not tan. I just cried myself red over my fellow Texans. And that’s why I drink in their honor.”

Bryant’s Cruz said he was now “in a bit of hot water, which I’m told is a thing no one in Texas has” for his recent short-lived travel. It took the senator just 10 hours after he landed at Cancún International Airport Wednesday evening to book a flight back to Houston early Thursday morning — though he was originally scheduled to return on Saturday.

Cruz was then offered the opportunity to apologize.

Bryant continued: “The whole trip was the girls’ idea. They love Cancún. There’s so much for kids to do. The topless beach, shots at Señor Frogs, swimming with sick dolphins. They love it.”

Once the news came to light that Cruz had fled the country for warmer weather, criticism was swift. In his first statement, the senator said that “wanting to be a good dad,” he had flown down to Cancún with his family because his daughters had “asked if they could take a trip with some friends.”

Later, speaking with reporters outside his home Thursday night, Cruz again reiterated that the getaway was scheduled due to the urging of his daughters while also acknowledging the profound suffering of the many Texans he had left behind.

“Leaving when so many Texans were hurting didn’t feel right, and so I changed my return flight and flew back on the first available flight I could take,” Cruz said. “In hindsight, I wouldn’t have done it. I was trying to be a dad.”

The other guests on “Oops, you did it again” were figures facing scandals of their own, including New York Governor Andrew Cuomo (played by Pete Davidson), who is up against growing scrutiny over nursing home COVID-19 deaths, and actress Gina Carano (played by Cecily Strong), who was recently fired from “The Mandalorian” after making anti-Semitic remarks on social media.

Yet despite their own controversies, both adamantly insisted they were nothing like the senator sitting beside them — and tried to knock down any association with Cruz.

“Don’t associate yourself with me. I am strong, and you are a pile of soup,” Strong’s Carano directed to Bryant’s Cruz. “I am first class, and you are coach.”

“Yeah, but I’m on the upgrade list, though,” Bryant interjected.

Strong continued: “And if you compare yourself to me, I will blast you to the farthest deserts of Tatooine.”

“Hey, anything to get out of Texas,” Bryant retorted.

“If you hate Ted Cruz, this was a pretty fun week,” Jost began the segment. “And if you like Ted Cruz, then you’re Ted Cruz.”

Jost continued: “Cruz initially released a statement saying he only went on vacation because his daughters made him go. And if you think it was bad to throw his daughters under the bus, Cruz would like you to know that that statement was his wife’s idea.”

Jost proceeded to mock Cruz for wearing a Texas flag mask upon his return to the United States as though “nothing happened” after he “abandoned Texas.”

Che chimed in to add that Cruz would “have returned from Mexico even sooner, but it took him like 40 minutes to get out of the hammock.”

Watch the full segment below:

Sorgente articolo:
‘SNL’ lampoons Cruz for traveling to Cancún amid crisis in Texas – The Boston Globe