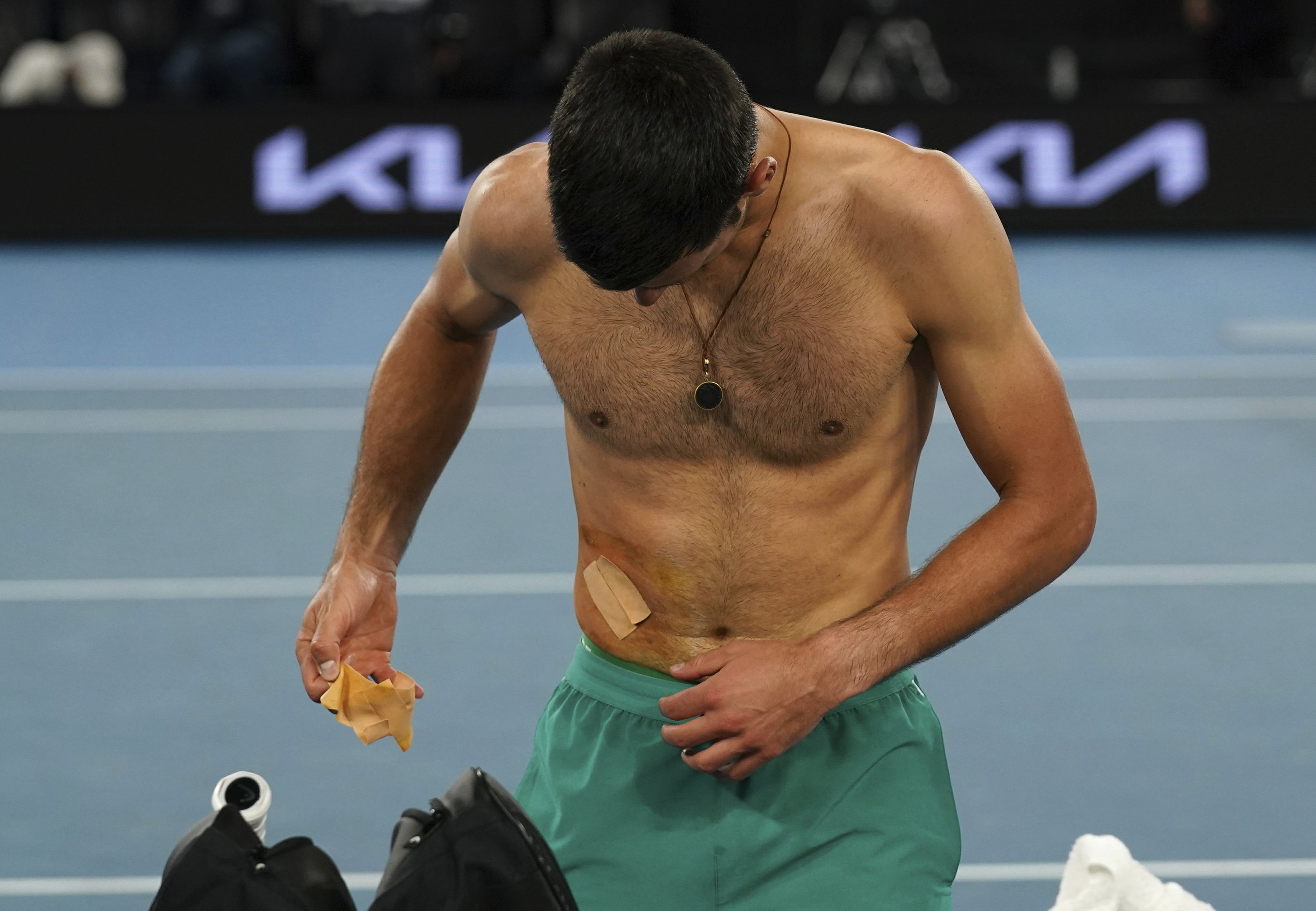 MELBOURNE, Australia (AP) — The Latest on Day 14 of the Australian Open tennis tournament (all times local):

Novak Djokovic says he did tear an abdominal muscle in his third-round match at the Australian Open.

That’s what he announced right after that win, but then he refused to go into details until the tournament was over.

Now that he has won his ninth title at Melbourne Park, Djokovic clarified he was merely guessing about the severity of the injury at the time.

He said he was not sure he could keep competing until about two hours before his next match and at that point did not think winning the championship was realistic.

Djokovic said that people will be able to see some of what he did to recover and be able to continue to play in Melbourne in a documentary that he has been filming and plans to release at the end of 2021.

The No. 1-seeded Djokovic has won the trophy three years in a row at Melbourne Park.

He has won six of the last 10 major tournaments overall and his total of 18 Slams moves him within two of the men’s record of 20 shared by Roger Federer and Rafael Nadal.

The No. 4-seeded Medvedev was trying to collect his first Grand Slam title Sunday.

Medvedev also had won his past 12 matches against Top 10 opponents.

Novak Djokovic has taken a two-set lead over Daniil Medvedev in the Australian Open final.

Djokovic grabbed the opener by a 7-5 score and the second 6-2.

Medvedev destroyed his racket by spiking it to the court after missing a return to fall behind 5-2 in the second set.

He had broken to begin that set but Djokovic then reeled off four games in a row.

Djokovic is now one set away from his ninth championship at Melbourne Park and 18th Grand Slam title overall.

Medvedev needs to win three sets in a row to earn his first major trophy. He never has won a match after dropping the first two sets.

Novak Djokovic has taken the opening set of the Australian Open final against Daniil Medvedev by a 7-5 score.

They were at 5-all before Djokovic held at love and then broke Medvedev.

There were several lengthy exchanges at the baseline that lasted at least 10 strokes in that set, and Djokovic held an 8-5 advantage on those points.

Medvedev is aiming for his first major championship.

Rod Laver Arena is about half-full after spectators were barred entirely for five days earlier in the tournament because of a local COVID-19 lockdown. The crowd capacity has been reduced to 50% under regulations in place during the pandemic.

The temperature is in the mid-60s Fahrenheit (below 20 Celsius).

Djokovic is seeded No. 1 and bidding for a third consecutive title at Melbourne Park and ninth overall.

This is his 28th Grand Slam final. He has won 17 previously.

Medvedev is seeded No. 4 and appearing in his second major final after being the runner-up to Rafael Nadal at the 2019 U.S. Open.

Medvedev comes into Sunday with a 20-match winning streak.

Novak Djokovic and Daniil Medvedev are getting ready to meet in the Australian Open men’s final.

Djokovic is seeded No. 1 and the two-time defending champion. He is seeking a ninth trophy at Melbourne Park and 18th Grand Slam title overall.

That would move him within two of the men’s record of 20 shared by Roger Federer and Rafael Nadal.

Medvedev is trying to collect his first Grand Slam title.

This is his second major final. He enters Sunday on a 20-match winning streak.

The 25-year-old from Russia also has won his past 12 matches against Top 10 opponents.

Filip Polasek and Ivan Dodig have won the men’s doubles title at the Australian Open with a 6-3, 6-4 win over 2020 champions Rajeev Ram and Joe Salisbury.

Ram, a 36-year-old American who spent two weeks in hard quarantine after arriving in Australia last month, was attempting a double at Melbourne Park after winning the mixed doubles title with Barbora Krejcikova on Saturday night.

The 35-year-old Polasek dedicated the victory to his newly-born baby daughter.

Ram saved a championship point while serving in the ninth game and held, but Polasek sealed the title in the next game.

Novak Djokovic is bidding for a ninth Australian Open singles title in the final later Sunday against fourth-seeded Daniil Medvedev.

Sorgente articolo:
The Latest: Djokovic says he did tear muscle in Australia – The Associated Press