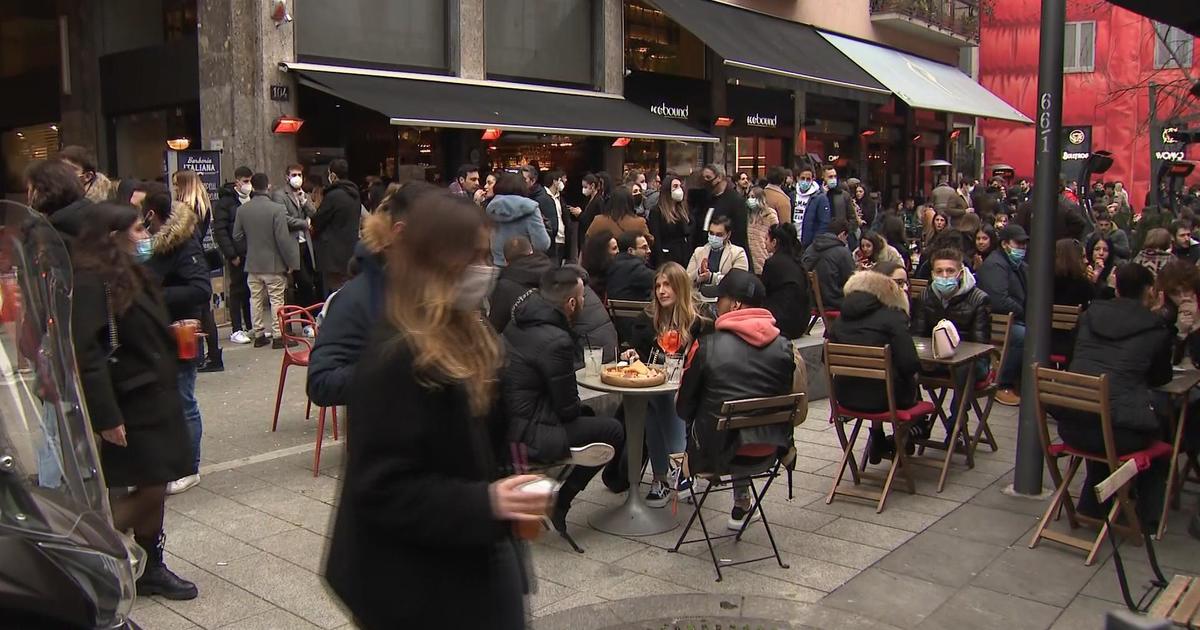 Milan, Italy — Italy discovered its first COVID-19 infections one year ago. The outbreak led to the first nationwide lockdown outside of China, and it has claimed more than 95,000 lives across the country. But as CBS News correspondent Chris Livesay reports, it’s a very different story there now.

Life has slowly been returning to normal, and Italians packed the streets over the weekend – even in the country’s north, which was once the epicenter of its coronavirus epidemic.

Beatrice has just turned one year old, and what a year it’s been. Two weeks after she was born, her mother noticed a fever.

“It used to be that when my kids coughed, we didn’t immediately freak out,” mom Marta Zaninoni told CBS News. “But now in our family, a cough is no longer just a cough. It’s really stressful.”

Beatrice had COVID-19 — the first known case in Europe in a newborn.

“They immediately put her in an incubator,” said Zaninoni. “I couldn’t even say goodbye.”

As her tiny body fought the disease in isolation, Beatrice became a symbol of hope for her family’s hard-hit home region of Bergamo.

Many followed her progress in the hospital, and the entire country would soon join Beatrice in isolation. Infections skyrocketed, plunging towns, cities, and then all of Italy into what was — for a free society — unthinkable: lockdown.

The death toll soared, and as the disease forced military servicemembers to turn into morticians and barns into makeshift morgues, it robbed not only people’s lives, but their dignity.

Italy’s iconic city streets were devoid of people. Pope Francis even delivered an unprecedent lonely Easter service, virtually. In small towns like Nembro, which once had the highest death rate in the country, Catholic Mass was held before empty pews throughout most of 2020.

But today, from Milan to Rome, life has been returning. On Sunday, Nembro’s church was full.

“Last year we had 188 funerals,” the priest in Nembro, Don Matteo Cella, told Livesay. “This year, people are planning weddings.”

Old traditions are bouncing back across Italy, but with some differences. A year ago, something as simple as drinking a cappuccino out in the open had become unthinkable.

Life is hardly back to normal; the law still requires that you to wear a mask at all times in public, even outside, except when you’re eating or drinking.

It’s a slow recovery, and one not without casualties — something Beatrice’s mother knows first-hand as a COVID survivor herself. The virus killed her uncle and grandfather while Beatrice was still in the hospital.

“They never got to meet Beatrice,” lamented Zaninoni, adding that the disease did bring the rest of the family closer together than ever.

“Finally, after 40 days, Beatrice became COVID-free on Easter Day,” the mother recalled. “It was a true resurrection for us. Despite all the death in Italy, Beatrice brought us life.”

The rollout across the European Union has been slower than in the U.S. Many Italians in their 80s still don’t know when they’ll get their first shot — a particular concern in a country with one of the oldest populations in the world.

Sorgente articolo:
A year after its 1st COVID-19 cases were discovered, Italy is cautiously bouncing back – CBS News