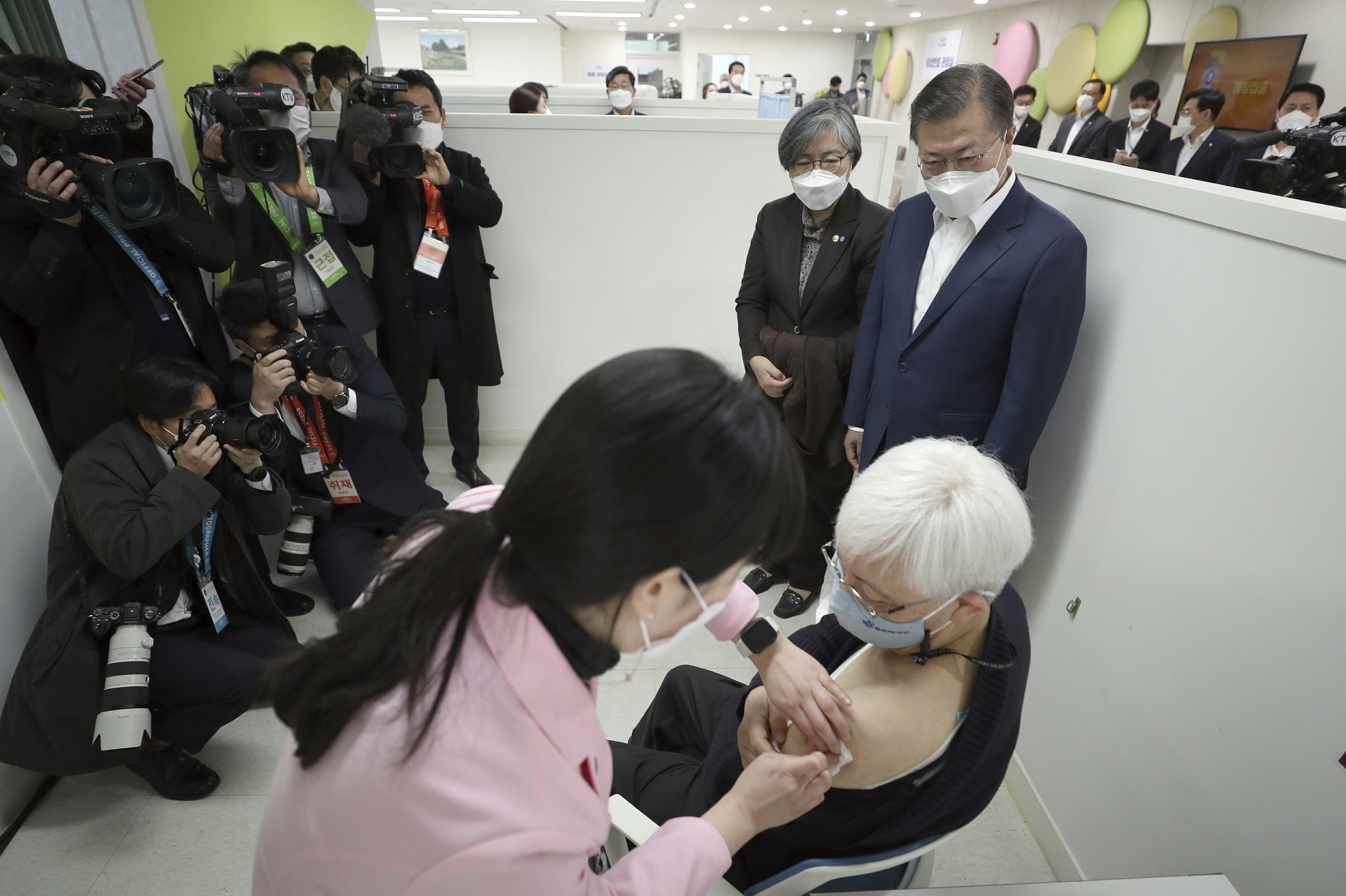 South Korea administered its first available shots of coronavirus vaccines to people at long-term care facilities Friday, launching a mass immunization campaign that health authorities hope will restore some level of normalcy by the end of the year.

The rollout of vaccines come at a critical time for the country, which has seen its hard-won gains against the virus get wiped out by a winter surge and is struggling to mitigate the pandemic’s economic shock that decimated service sector jobs.

“I felt very anxious over the past year, but I feel more secure now after receiving the vaccine,” said nursing home worker Lee Gyeong-soon, who received her shot at a public health center in northern Seoul.

Health authorities plan to complete injecting the first of two doses to some 344,000 residents and workers at long-term care settings and 55,000 frontline medical workers by the end of March.

“We have taken the historic first step toward restoring normalcy,” senior Health Ministry official Son Young-rae said during a briefing.

He said the government has decided to extend current social distancing levels for at least another two weeks, clamping down on private social gatherings of five or more people and banning indoor dining after 10 p.m., to help create a safe environment for vaccinations.

Separately, doctors, nurses and other health professionals treating COVID-19 patients will begin receiving the shots developed by Pfizer and BioNTech from Saturday. The Pfizer-BioNTech vaccines, which South Korea obtained through the WHO-backed COVAX program, arrived at Incheon International Airport on Friday and will be transported to five major COVID-19 treatment hospitals.

The next available vaccines are likely to go to workers at general hospitals, paramedics, quarantine workers and people over 65 years in age before broader groups of adults begin receiving shots in summer.

In other developments around the Asia-Pacific region:

— Hong Kong began administering its first COVID-19 vaccines to the public, kicking off its program offering free vaccinations to all 7.5 million residents. People age 60 and older and health care workers are among the some 2.4 million people currently prioritized to receive vaccines at community centers and outpatient clinics across Hong Kong. The government said registrations for the first two weeks of the program are full. Participants so far will be receiving the vaccine by Chinese biopharmaceutical firm Sinovac. A million doses arrived in the city last week, and Hong Kong leader Carrie Lam and other top government officials were vaccinated first in a bid to bolster confidence in the program. Hong Kong has struck deals to buy 22.5 million doses of vaccines, from Sinovac, AstraZeneca and Fosun Pharma, which will deliver the vaccine developed by Pfizer-BioNTech.

— Sri Lanka’s government has changed its policy of allowing only cremations for COVID-19 victims and will allow burials, after months of protests by Muslims and others that it is insensitive toward religious beliefs. The government issued the decree Thursday night allowing cremation and burials following stipulated health guidelines. The insistence on cremation only had cited possible groundwater contamination, despite the World Health Organization and local medical professional bodies saying such claims have no scientific basis.

— A state of emergency that was set up to curb the coronavirus in Japan will be lifted in six urban areas this weekend while staying in the Tokyo area for another week. The government minister in charge of pandemic measures told a government panel about the changes, though the official decision hasn’t been announced. The state of emergency began in January and centered around asking restaurants, bars and other businesses to close at 8 p.m. Partially lifting the emergency, and just a week early, underlines Japan’s eagerness to keep the economy going. Separately, Japan said coronavirus vaccine shipments will arrive at the local government offices by the end of June to inoculate the nation’s 36 million elderly people. Those 65 years or older are scheduled to get vaccines after health workers. But worries had been growing about an ample supply of the imported vaccines.

— China has approved two more COVID-19 vaccines for wider use. The vaccine from CanSino Biologics is the first developed by a Chinese company that requires only one shot. CanSino said it is 65.28% effective 28 days after the dose is given. The other newly approved vaccine is from a subsidiary of state-owned Sinopharm, the Wuhan Institute of Biologics, which said its vaccine is 72.51% effective. Vaccines from Sinovac and from Sinopharm’s Beijing subsidiary were approved earlier and are in use. Sinovac and Sinopharm have both said they will be able to manufacture 1 billion shots annually by the end of this year. A military researcher told state media CanSino can produce up to 300 million doses per year, and the Wuhan Institute said it can produce up to 100 million doses per year.