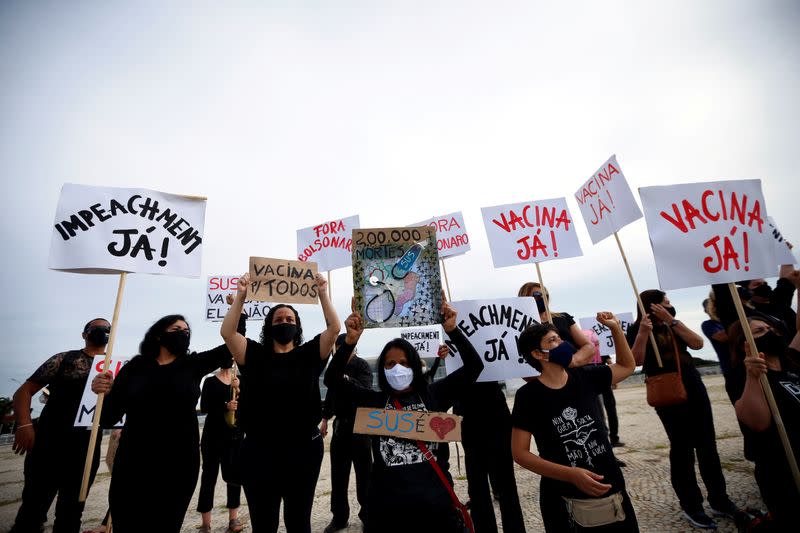 BRASILIA (Reuters) – The governor of Brazil’s capital city, Brasilia, decreed a 24-hour lockdown for all but essential services on Friday to curb a worsening COVID-19 outbreak that has filled its intensive care wards to the brim.

The drastic step came as right-wing President Jair Bolsonaro, who has repeatedly downplayed the gravity of the pandemic that has killed 250,000 Brazilians, renewed his attacks on state governors for destroying jobs with lockdowns.

“The lockdown will start today and be total, it will be 24-hours a day,” said a press aide for the federal district’s Governor Ibaneis Rocha. A decree published at the end of the day said the lockdown would start right after midnight Saturday.

Shops, pharmacies, gas stations, churches and funeral parlors will remain open, the aide said, but everything else will shut down, especially bars and restaurants, which were blamed for increased spread during the end of last year and Carnival holidays.

Intensive care wards in Brasilia, the third-largest city in Brazil with 3 million inhabitants, are as full as they were at the peak of the pandemic last year, with more than 80% of the beds occupied, the health department said.

The situation is as bad or worse in cities across Brazil, with intensive care beds in the capitals of 17 of Brazil’s 26 states this week reaching the most critical level since the pandemic began a year ago, according to a report by biomedical center Fiocruz.

Bolsonaro, who lives and works in Brasilia, said governors imposing restrictions were doing Brazilians a disservice.

“What the people most want is to work,” he said on a visit to northeastern Brazil on Friday, one day after Brazil recorded its second-worst daily death toll. He threatened to cut off federal emergency pandemic assistance to states resorting to lockdowns.

“From now on, governors who close down their states will have to provide for their own emergency aid,” Bolsonaro said.

Brazil has had 65,169 new cases of the novel coronavirus reported in the past 24 hours, and 1,337 deaths from COVID-19, the health ministry said on Friday.

The South American country has now registered 10,455,630 cases since the pandemic began, while the official death toll has risen to 252,835, according to ministry data, in the world’s third-worst outbreak outside the United States and India and the world’s second-deadliest.