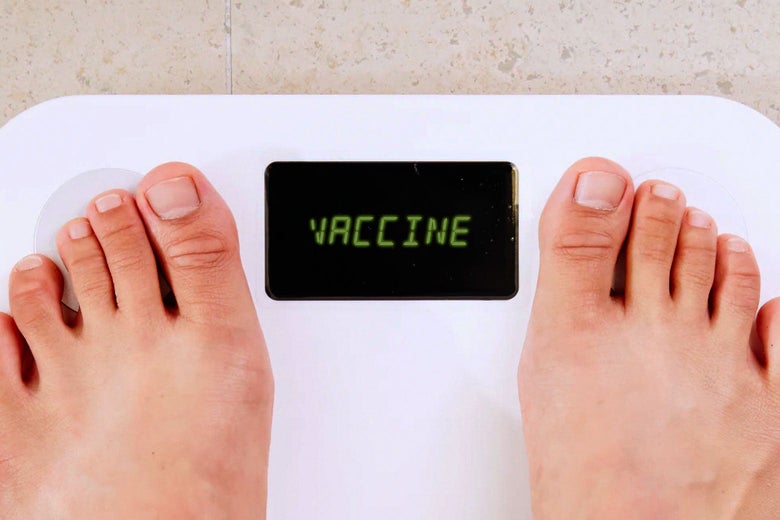 Vaccine Diaries is a series of dispatches exploring the rollout of COVID-19 immunizations.

“Name.” “Date of Birth.” “Do you have a preexisting condition?”

“Yes.” I had practiced saying it out loud. “Obesity.”

I took a seat in the waiting room of the vaccine site, looking around at my fat brethren like it was a very sad, sterile version of the fat girl pool party scene in Hulu’s Shrill.

When New York state announced that Phase 1B of vaccinations would include those who are “obese” or “severely obese,” I knew I would qualify. My heart sank into my stomach.

From my understanding, childhood therapy is just playing Chutes and Ladders with a menopausal divorcée until you agree to stop eating carbs.

I am fat. I am a fat activist. Like a lot of larger-bodied people, I have embraced the word fat. Doing so allows me to buy clothes that fit, rather than those that could fit if I changed. It gives me permission to go to spin classes (in pre-pandemic days) and worry only about trying to beat other people’s scores. It allows me to exist. The word fat, I have made clear to those around me and to myself, is not associated with a moral or intellectual or health failing. It is a descriptor. I have brown hair, blue eyes, excellent taste in caftans. I’m 5’9”, and I am fat.

But among all the radical self-love coffee mugs I’ve seen, “I love being obese” has never been one of them. The word obese elicits an unparalleled grief in me. When I heard the announcement I had been waiting for, I spent three hours in the grocery store trying to figure out what I “should” have for dinner that night. I wasn’t immediately sure I would claim my spot in line. If I confirmed my comorbidity, what would I tell people? It’s obesity. I have “obesity.”

Larger-bodied people are often told their weight is the result of their mind: a lack of willpower, a lack of knowledge about nutrition, or in my case, an emotional weakness. Following my parents’ divorce at 5 years old, my pediatrician took a look at my BMI, told me that I was an emotional eater, and subsequently put me in therapy. Because I was a literal kindergartner, my food intake was largely controlled by the adults in my life. Being told my emotional issues were at fault for my size didn’t make a ton of sense, but I also didn’t have much of a choice at the time in my health decisions, so to therapy I went. In between playing board games with me, my Upper West Side shrink drew a body diagram with a jail located in the torso. The jail was full of anthropomorphized feelings labeled “anger,” “sadness,” “guilt,” and it was guarded by pieces of pizza and cake. From my understanding, childhood therapy is just playing Chutes and Ladders with a menopausal divorcée until you agree to stop eating carbs.

Every year I had an appointment with that pediatrician at the end of the school year. Every year, in preparation, I embarked upon an extreme diet. I wanted to maintain a “normal” BMI in the eyes of my doctor so my overworked single mother didn’t have to worry about my health. My doctor never really asked what my behaviors around food and exercise were, provided that my data point on her height/weight chart fit in the right part of the curve (something I still see in my nightmares—if you know, you know). So, fasting in seventh grade became my normal, because that’s what made me, just by numbers, “normal.”

The periodic bouts of extreme restriction and self-loathing “worked,” for a while. But when I was 15, despite my otherwise healthy diet and status as a tri-varsity athlete, a doctor told me I was obese for the first time. Nearly every day following that conversation, I made sure the number on my sister’s Taylor scale was lower than the day before. To reach a “healthy weight” for my height, my doctor told me I had to restrict my caloric intake, stop eating all the cookies and cakes she kept insisting I must be eating. There wasn’t much to cut out; I didn’t and still don’t like sweets. So I did what I could with my own limited knowledge of calories in and calories out, and my restrictions around food got even more extreme. I just wanted to be healthy.

Getting to “healthy” involved a lot of shotgunning Diet Cokes to feel full. After I caved to hunger pangs and snuck a slice of Healthy Choice turkey at 1 a.m., I journaled that I was a “stupid fat bitch” under the glow of a clip-on reading light. This classic healthy behavior got me to a BMI in the dead center of the “healthy” range, and a LOT of compliments. No one questioned how it was happening until the numbers kept going down. Disordered eating affects people all across the size spectrum, and it has dangerous health consequences even for those “with obesity.” The only hint I had on this was a single Grey’s Anatomy episode in which Meredith punctured a heart during surgery—the patient was obese but had perilously thin organ walls because of undiagnosed anorexia.

No one noticed mine until I was Olsen twin–thin. Why was subsisting exclusively on carrot sticks and cherry tomatoes dipped in ketchup OK when I was 180 pounds but not when I was 103 pounds? The BMI chart reared its ugly head again, and I had to gain weight or I couldn’t play sports, or stay in school. This did not involve getting “healthy,” just continued attempts to game the chart. Instead of fasting and taking diuretics before stepping on a scale, I was chugging gallons of Poland Spring in the bathroom of my doctor’s office before a mandatory weekly weigh-in.

A big part of my eventual recovery meant throwing out the charts and formulas altogether. The last weight I saw on the scale was in the double digits. Doctors don’t actually need to weigh you, it turns out, when the risks associated with a weigh-in exceed any preventive care this data point could theoretically provide. (You can diagnose diabetes based on bloodwork—who knew?). By seeking out weight-neutral doctors who would look at my health holistically as opposed to making snap judgments based on their own biases, I could finally focus on actually being and feeling healthy (mentally and physically). I have been more or less the same size for a decade now. And I know that I am significantly better off than I was when I was in a cycle of dieting with the goal of weight loss.

But when I heard the good news about my eligibility for the vaccine, a small voice in my brain feared it would draw me right back in. An even smaller voice kind of liked the prospects. I found myself looking back at pictures of my underweight teenage self, simultaneously thinking about the deep pain the word obesity caused her … but also about how disappointed she’d be in me now. Then I panicked that I was a bad fat activist. I felt like I was just one weigh-in away from losing my chosen identity because I can’t face a number on a scale. A number on a scale close to if not more than the one I saw at 15. After all those years, for the first time, I’d need to know my BMI to ensure I qualified, and I wasn’t sure if I could handle it.

I reminded myself of how problematic BMI is as a measure of health and how it leads to the perpetuation of weight discrimination and the diet-industrial complex (things that actively harm the health of larger-bodied patients). I reminded myself that all the hand-wringing about weight and COVID-19 outcomes may well say more about the impacts of fatphobia in medicine (and the intersections of this mistreatment with other forms of discrimination) than about the actual relationship between a virus and someone’s body size. But the trauma I’ve experienced as a result of the diet culture didn’t just vanish when I “recovered” from my anorexia.

I am, right now, healthier than I have ever been. And I also weigh more than I ever have. Clinical obesity does not take into account that different people have different weights that might be healthy for them—whether you believe that based on set point weight theory (essentially, the idea that there are genetically determined “ideal” weights for different people), or just understand that for some, the diet-industrial complex hurts more than it could ever help. Fat isn’t black and white, just like I know my health isn’t black and white. Obesity is.

As far as I’m concerned, I was fat with BMIs ranging from 14 to 40. No matter how thin I got, there was always a larger-bodied person trying to get out. I can own being fat, because I have internalized that regardless of my weight, it is my chosen identity, an identity that ultimately gives me more freedom than it takes away. Obese is not an identity I give myself: It is a label put on me by others that I have no control over. But if briefly calling myself obese would make me safer, it was worth it. And more importantly, I realized it’s something I am capable of doing.

I looked at my weight after I got home from the three-hour excursion pacing the grocery store. And now, I am vaccinated.

Sorgente articolo:
I Am Fat. To Get the Vaccine, I Had to Say I Am “Obese.” – Slate