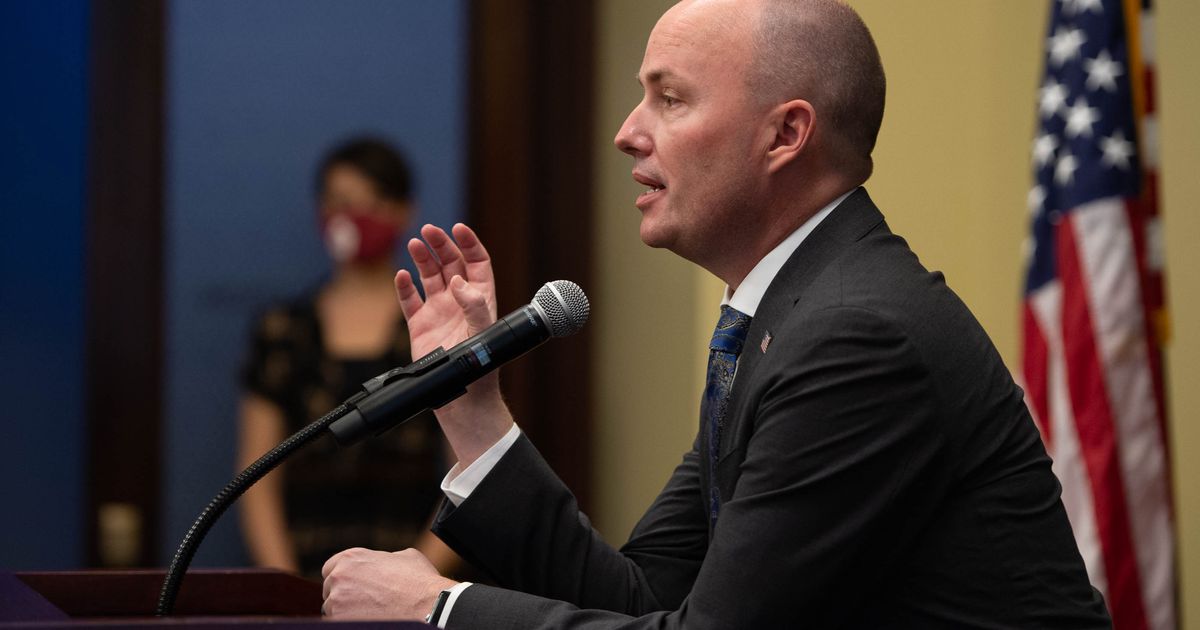 Editor’s note: The Salt Lake Tribune is providing free access to critical stories about the coronavirus. Sign up for our Top Stories newsletter, sent to your inbox every weekday morning. To support journalism like this, please donate or become a subscriber.

Utahns age 50 and older can start making appointments to get their COVID-19 vaccinations on Monday, Gov. Spencer Cox announced Thursday.

Cox also said Utahns over age 18 with certain health conditions can seek a vaccination. Those new qualifying conditions are diabetes (Type 1 or Type 2), chronic kidney disease, or obesity — people with a body mass index, or BMI, of 30 or higher. The previous BMI threshold was 40 or higher.

The expansion will mean 700,000 more Utahns now can be vaccinated, “a huge addition to eligibility,” Cox said at his weekly COVID-19 media briefing, streamed over Facebook Live from the Utah Capitol.

He asked newly eligible Utahns to wait until Monday to make appointments, so vaccination sites can prepare for the rush of new recipients. “It’s not going to be possible for everyone in these areas to get an appointment right away,” Cox said, adding that people are “going to have to be patient, going to have to keep checking back.”

The state hopes to be able to open vaccinations to all adults in Utah by April, Cox said, “assuming everything goes according to plan” — which, he acknowledged, is a big assumption.

Before Thursday, the list of Utahns eligible for the vaccine included people 65 and older, people over 18 with certain serious or chronic medical conditions, health care workers, first responders, teachers, and residents and staff of long-term care facilities.

The expansion of eligibility comes a day after Utah hospitals started receiving shipments of the single-shot Johnson & Johnson vaccine that the U.S. Food and Drug Administration approved for emergency use on Saturday. It joins two double-dose regimens, by Pfizer and Moderna, which have been available since December.

Dr. Angela Dunn, the state’s epidemiologist, urged Utahns to accept whichever of the three vaccines they are offered, as they seek appointments. “The best vaccine you can get is the one can get first, regardless of manufacturer,” she said.

Eleven counties remain in the “high” transmission category, though, Cox said, “at the rate we’re going now, every county will be in ‘moderate’ in the next couple weeks.” He said Utah County is “really close. Most of the Wasatch Front is close.”

Cox added that “there are no restrictions on gatherings in ‘moderate,’ so long as they are wearing masks.”

He noted that sports arenas and entertainment venues — he singled out Sandy’s Hale Centre Theatre as an example — will have to choose between selling concessions to a socially distanced audience or packing the house with masked audience members not eating and drinking.

Cox said he’s closely watching a bill in the Utah Legislature, which is finishing its annual session this week, that would end the statewide mandate to wear masks, while leaving mask orders in place for K-12 schools and large, crowded gatherings. The bill has passed the Utah House and awaits action in the Utah Senate before it can get to Cox’s desk.

“I hate that we’re having these fights again right now,” Cox said of the legislative attempt to declare an “endgame” to the pandemic — though he added that “there are a lot of good things in that bill, things that we agree with.”

“We’re so close to the end of this. The end is in sight,” Cox said of the pandemic. “Nobody likes the masks, and nobody likes government telling us what to do. And I agree with that. I wish we didn’t have to do this. … [But] the mask mandate is the least intrusive of the mandates, and allows us to get back to normal quicker and … allows more people to participate in the economy.”

There’s “no question,” Cox said, that Utah legislators are looking at states like Texas, Alabama and Mississippi — whose governors declared an end to all pandemic-related restrictions as soon as next week — and are feeling pressure to do something similar.

Dunn warned that, from an epidemiologist’s view, “we’re all really concerned when states open up or release restrictions seemingly too early. As you know, this virus does not respect boundaries, even international boundaries. We’re only as safe as our weakest state.”

The best course for Utah, Dunn added “is make sure that we keep our case counts as low as possible and get vaccinated as quickly as possible to prevent any potential spread resulting from surges in other states.”

During Thursday’s news conference, Lt. Gov. Deidre Henderson unveiled a “road map” designed, she said, to “make sure the vaccines are administered fairly and equitably.”

The map, Henderson said, is meant to push vaccine providers to get doses out to “historically underserved communities” — a list that includes the state’s minority and ethnic populations, people experiencing homelessness, people living in congregate living settings, people with disabilities, people without access to transportation, rural and frontier communities, tribal members, older Utahns, and households without internet access.

Cox also said he wanted “to reflect on the fact that we have lost almost 2,000 Utahns to this insidious disease.”

At the start of the pandemic, Cox said, he asked Dunn how bad the pandemic could get. As Cox recalls the conversation, Dunn told him the worst-case scenario was 20,000 Utahns dying from COVID-19; the most optimistic outcome the state could hope for was 2,000 deaths.

“We’re very grateful and excited that we’re on the best-case scenario of that,” Cox said. As of Thursday, the state has reported that 1,965 Utahns have died from COVID-19 since the pandemic began a year ago.