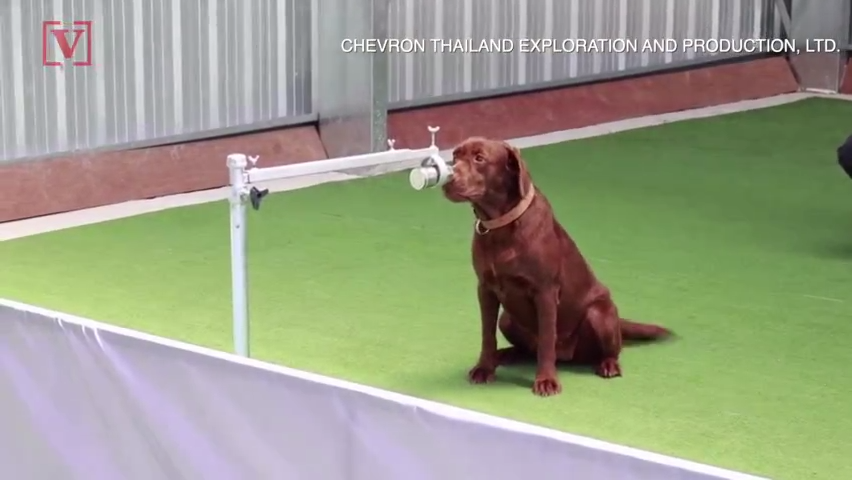 Dogs at a Thailand university have been trained to detect COVID with a high success rate. They hope it can be an alternate way of detecting the virus.

One person has died and another was critically ill with blood clots and cerebral hemorrhage Sunday after receiving the AstraZeneca coronavirus vaccine, authorities in Denmark say.

The two developed severe symptoms within 14 days after vaccination, the Capital Region of Denmark, which operates public hospitals, told the Ekstra Bladet newspaper. Use of the AstraZeneca vaccine was suspended in several European countries earlier this month amid reports of blood clots in a small number of patients.

“We prioritize reports of suspected serious side effects such as these,” Tanja Erichsen, a director at the Danish Medicines Agency, said on Twitter. “We are in the process of dealing with the two specific cases.”

Last week, the European Medicines Agency determined the vaccine was safe and effective. Emer Cooke, the agency’s executive director, said the benefits in protecting people from COVID-19 “outweigh the possible risks.” Germany, France, Italy and Spain were among nations saying they would resume using the vaccine.

►One in four Americans in recent weeks have seen someone blame Asian people for the coronavirus epidemic, a new USA TODAY/Ipsos Poll finds. The nationwide survey was taken Thursday and Friday, in the wake of last week’s mass shooting in Georgia of eight people, six of them women of Asian descent.

►The first-round game between No. 7 seed Oregon and No. 10 seed Virginia Commonwealth in the NCAA men’s tournament was called off three hours before it was to begin Saturday night because of COVID-19 concerns.

► The European Union’s executive arm is increasing its pressure on pharmaceutical companies to speed up their vaccine delivery to the continent as virus numbers are rising again in many member countries.

📈 Today’s numbers: The U.S. has over 29.7 million confirmed coronavirus cases and more than 542,000 deaths, according to Johns Hopkins University data. The global totals: 123 million cases and 2.7 million deaths. More than 156.7 million vaccine doses have been distributed in the U.S. and 121.4 million have been administered, according to the CDC.

USA TODAY is tracking COVID-19 news. Keep refreshing this page for the latest updates. Want more? Sign up for our Coronavirus Watch newsletter for updates to your inbox and join our Facebook group.

Miami Beach has declared a state of emergency in its entertainment district because of an influx of spring breakers who have inundated the city. A curfew went into effect at 8 p.m. Saturday and will last at least until the same time Tuesday, Miami Beach Interim City Manager Raul Aguila said. All restaurants, bars and businesses are required to be closed by 8 p.m. The decision, Aguila said, is necessary to protect residents and spring breakers alike.

“As we hit the peak – at the peak of spring break, we are quite simply overwhelmed in the entertainment district,” Aguila said. “Folks, this is not an easy decision to make, we are doing that to protect the public health and safety.”

The coronavirus pandemic has changed many aspects of the American health care system, but nothing changed quite as drastically as the rise of telemedicine. While virtual care existed before COVID-19, the practice boomed after state-mandated, stay-at-home orders and have since remained strong. Prior to the pandemic, Blue Cross Blue Shield of Massachusetts received about 200 telehealth claims per day. That number reached up to 40,0000 claims per day from April to May 2020, and the insurer is still receiving about 30,000 claims per day almost a year later, according to spokesperson Amy McHugh. Athenahealth, a health tech company, released an interactive dashboard that delivered insights on telehealth trends from 18.4 million virtual appointments by 60,000 providers.

“The pandemic has necessitated a new era in medicine in which telehealth appointments are a core aspect of the patient-provider relationship,” said Jessica Sweeney-Platt, the company’s vice president of research and editorial strategy.

The Mexican tourism center of Cancun is seeing a spike in visitors as vaccinated vacationers and those with pandemic fatigue book getaways. Cancun’s tourism board is projecting 300,000 visitors from the United States in March based on results so far and reservations for the next two weeks. That’s more than the 222,731 in March 2020 when the pandemic took hold but below pre-pandemic visitation of 464,569 in March 2019. Indianapolis nurse Harmony Godsey, who is vaccinated, and five friends paid about $850 per person for a round-trip flight, oceanfront room for four nights and all meals and alcoholic beverages.

“It really was only able to happen, honestly, because of COVID for it being so inexpensive,” she said.

The first three months of the vaccine rollout suggest faster is not necessarily better. A new analysis found states such as South Carolina, Florida and Missouri that raced ahead of others to offer the vaccine to ever-larger groups of people have vaccinated smaller shares of their population than those that moved more slowly and methodically, such as Hawaii and Connecticut. The explanation may be that the rapid expansion of eligibility caused a surge in demand too big for some states to handle, spreading confusion, frustration and resignation among many people.

“The infrastructure just wasn’t ready. It kind of backfired,” said Dr. Rebecca Wurtz, an infectious disease physician and health data specialist at the University of Minnesota’s School of Public Health. “In the rush to satisfy everyone, governors satisfied few and frustrated many.”

Indianapolis celebrated the city’s largest event since the pandemic began as it hosted the opening round of the NCAA tournament this weekend, but revelry surrounding the games is causing consternation among public health experts. Most people said they felt safe, especially at the games themselves, where facilities are restricted to 25% of their normal capacity or less. The busy downtown streets drew vendors who have seen little business over the past year, from pop-up clothing retailers to a troop of Girl Scouts selling cookies.

But gatherings worried public health experts, who fear they could undermine the rigorous health and safety protocols the NCAA and Indianapolis officials have put in place to keep the tournament safe under unprecedented conditions.

Vulnerable counties tend to have lower COVID-19 vaccination rates, according to the CDC’s Morbidity and Mortality Weekly Report released last week. The study looked at vaccine administration data for more than 49 million U.S. residents from December 2020 to March 1 and found that, on average, less vulnerable counties had a vaccination rate 2.5 percentage points higher than counties with high social vulnerability.

Researchers found the largest disparities were in counties that ranked high in socioeconomic vulnerability, such as high rates of poverty or unemployment.

A western Michigan restaurant owner was arrested and hauled to jail for her persistent refusal to comply with orders and restrictions tied to the coronavirus. State investigators said Marlena Pavlos-Hackney had allowed indoor dining at Marlena’s Bistro and Pizzeria when it was banned, wasn’t enforcing mask rules and was ignoring capacity limits. Her food license was suspended Jan. 20, but the business remained open. She will remain in jail until she pays $7,500 and authorities confirm that the pizzeria is closed, a judge said.