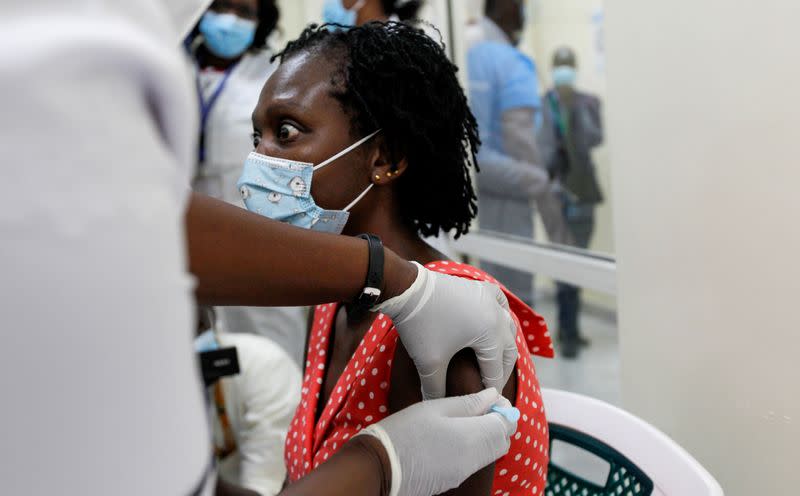 By David Lewis and Maggie Fick

NAIROBI (Reuters) – Kenya has offered free COVID-19 vaccines to all diplomats based there, including thousands of United Nations staff, even though it has not completed inoculating its own health workers, other frontline staff or elderly, drawing criticism from local medics.

The offer was made in a March 18 letter sent by the Ministry of Foreign affairs to diplomatic missions and seen by Reuters. Macharia Kamau, the foreign ministry’s principal secretary, said the shots being offered had been supplied via the World Health Organization (WHO) co-led COVAX vaccine access scheme.

Kenya, where nearly 2,000 people have died of COVID-19, is battling a third wave and the health ministry reported 28 deaths on Friday, the highest daily toll since the pandemic began.

“We need to protect everyone resident in Kenya. It just made sense not to reach out only to Kenyans but also to the international community here,” Kamau said

Kamau said Kenyans in priority categories were still being vaccinated but the decision was in keeping with Kenya’s responsibilities as home to a large diplomatic community.

He estimated that 25,000 to 30,000 diplomats, U.N. staff and family members live in Nairobi. “We are the only United Nations capital headquarters in the global South. Once you have this kind of honour, it comes with a certain responsibility.”

Nairobi hosts the U.N. headquarters in Africa. The U.N. Office at Nairobi (UNON) is one of four major sites worldwide, where many U.N. agencies such as the children’s agency UNICEF and others have large presences.

Just over 28,000 health workers, teachers and security personnel had received their first shots, the Ministry of Health said in a March 19 post on Twitter. It said in early March that it would set aside 400,000 vaccines for health staff and other essential workers.

“I think the government should focus on getting the priority population vaccinated and achieving vaccine acceptancy with them before opening up to diplomats,” said Elizabeth Gitau, a Kenyan physician and the chief executive officer of the Kenya Medical Association (KMA).

The health ministry referred questions to the foreign ministry. Two Nairobi-based diplomats who declined to be identified confirmed their embassies had received the offer.

“Kenyans must be given priority,” said Chibanzi Mwachonda, head of the Kenya Medical Practitioners, Pharmacists and Dentists Union.

The government note said vaccinations would begin on March 23 and only accredited diplomats and their families were eligible.

Kenya has so far only received two batches of AstraZeneca COVID-19 vaccines – just over 1 million via COVAX and a 100,000 shot donation from the Indian government.

COVAX was set up to ensure vaccines were available to high risk and vulnerable people, as well as frontline health workers, in countries unable to buy shots on the highly competitive international market.

The WHO referred Reuters to the UNON and the Kenyan government when asked for comment.

Newton Kanhema, spokesman for UNON, confirmed it had received the offer and would be taking the government up on it. He said UNON had approximately 20,000 staff and dependents, but many were children and therefore not eligible.

“Why does the Kenyan government prioritize expats – who have money and can get the vaccines through their own channels – over its own population, especially the poor?,” said one of diplomats whose embassy had received the jabs offer.