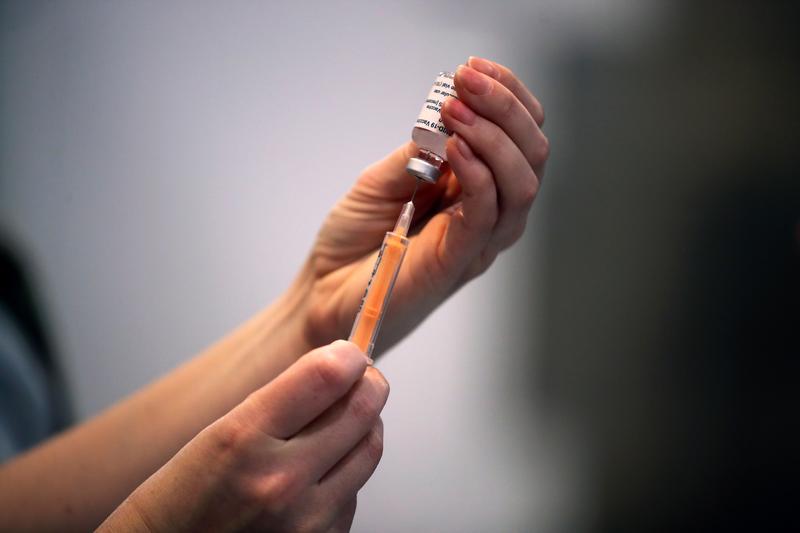 LONDON (Reuters) – More than 27.6 million people in Britain, well over half the adult population, have received at least one dose of a COVID-19 vaccine, official data showed on Sunday, after a daily record of 844,285 doses were administered the previous day.

Some 2.2 million people have had both doses of a vaccine, the data showed.

Earlier, the government had given a higher figure for the daily number of vaccine doses administered on Saturday. Hancock said the figure was revised down after adjusted data came in from Scotland, but the new figure was still a UK daily record.

Prime Minister Boris Johnson urged everyone to accept a vaccine when invited to receive one.

The daily release of COVID-19 data in the United Kingdom showed that 33 new deaths were recorded on Sunday, the lowest figure since October and down from peaks of well over 1,000 deaths per day in January and February.

The seven-day total number of deaths was 640, down by 37% compared with the previous seven-day period.

New infection numbers were also down, with 5,312 cases reported on Sunday and a seven-day total of 38,145, down by 4% on the previous seven days.

Since the start of the pandemic, a total of 126,155 people have died in the United Kingdom within 28 days of testing positive for COVID-19, the highest official death toll in Europe and the fifth highest in the word.

Britain’s vaccine rollout is the fastest in any major economy, although the government has warned that it will slow down next month due to a supply crunch.

Despite the slowdown, progress is still in line with official targets, meaning that unless anything changes the government’s four-step plan to ease lockdown is expected to go ahead as announced.