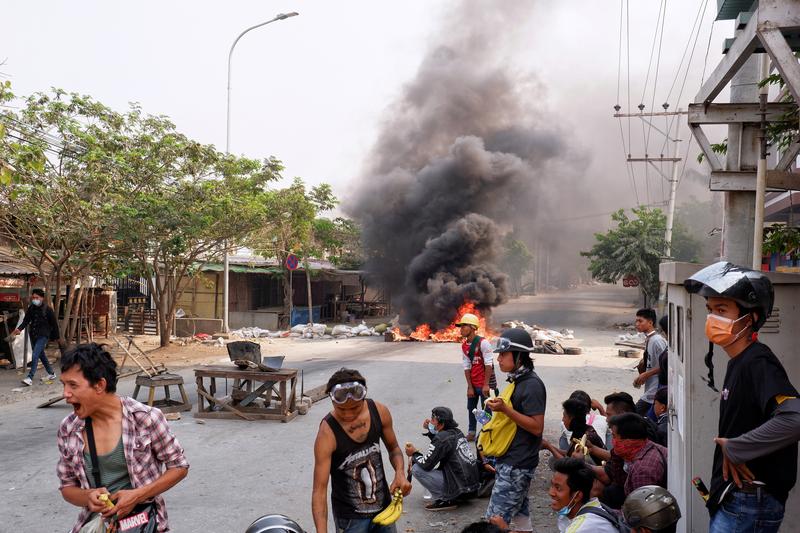 (Reuters) – The European Union and the United States on Monday imposed sanctions on individuals and groups linked to last month’s military coup in Myanmar as the repression of pro-democracy protesters by security forces reached what Germany’s foreign minister called “an unbearable” level.

The EU sanctions marked the 27-nation bloc’s most significant response since the overthrow of Aung San Suu Kyi’s elected government on Feb. 1. The 11 individuals targeted included General Min Aung Hlaing, the commander-in-chief of the Myanmar military and head of the junta that has taken power.

Washington had already sanctioned Min Aung Hlaing and the measures announced on Monday expanded the list of targets.

“The Burmese security forces’ lethal violence against peaceful protesters must end,” said Andrea Gacki, director of the U.S. Treasury’s Office of Foreign Assets Control. “We continue to stand with the people of Burma.”

There was no immediate response from the junta, which has shown no sign so far of being swayed by international condemnation of its actions.

At least 250 people have been killed by security forces attempting to quell weeks of pro-democracy protests in towns and cities across the country, according to the Assistance Association for Political Prisoners (AAPP) activist group.

Three people were killed in Myanmar’s second city, Mandalay in unrest on Monday, including a 15-year-old boy, witnesses and news reports said.

The junta has tried to justify the coup by saying a Nov. 8 election won by Suu Kyi’s party was fraudulent – an accusation the electoral commission has rejected. Military leaders have promised a new election but have not set a date and have declared a state of emergency.

Suu Kyi, who won the Nobel Peace Prize for her campaign to bring democratic civilian rule to Myanmar, is being held in detention while an array of accusations have been levelled at her, including bribery. Her lawyer says the charges are trumped up.

“We are going to take sanctions against 11 persons involved in the coup and the repression of the demonstrators,” EU foreign policy chief Josep Borrell said after EU foreign ministers adopted travel bans and asset freezes on them at a meeting in Brussels.

The EU already has an arms embargo on Myanmar and has targeted some senior military officials since 2018.

German Foreign Minister Heiko Maas told reporters before the meeting that the crackdown “has reached an unbearable extent”.

Among the individuals targeted are Min Aung Hlaing, Myint Swe, who has been acting president since the coup, and other senior military and administration staff.

Stronger measures are expected soon as the bloc moves to take aim at the businesses run by the military.

EU diplomats have told Reuters that parts of the military’s conglomerates, Myanmar Economic Holdings Limited (MEHL) and Myanmar Economic Corporation (MEC), are likely to be targeted, barring EU investors and banks from doing business with them.

The conglomerates are spread throughout the economy from mining and manufacturing to food and beverages to hotels, telecoms and banking.

“We don’t intend to punish the people of Myanmar but those who blatantly violate human rights,” Maas said.

U.S. Secretary of State Anthony Blinken said members of the 33rd Division had fired live rounds into a crowd in Mandalay. Both units were part of the security forces’ “planned systemic strategies to ramp up the use of lethal force”, he said.

Last month Washington froze about $1 billion in reserves Myanmar’s central bank was holding at the New York Fed, which the junta had attempted to withdraw after seizing power.

Some generals, including Min Aung Hlaing, were already under U.S. human rights sanctions over their role in a campaign against the Rohingya Muslim minority.

Earlier, U.S. Treasury sanctions targeted 14 Myanmar officers involved in the coup, along with some military companies.

In the latest violence, three people were killed in Mandalay, witnesses and the Myanmar Now news portal said.

Tun Tun Aung, a 15-year-old, was killed in his hut when security forces opened fire in the city’s Mya Yi Nandar area, his sister said.

“My brother was sitting next to the window,” she said. “We live in the squatters area. Our house is not strong enough to stop bullets.”

Six people were killed and several wounded in the city on Sunday, Myanmar Now reported.

State media said on Sunday that men on motorcycles attacked a member of the security forces who later died. The military said two policemen were killed in earlier protests.

Singapore’s Foreign Minister Vivian Balakrishnan, meanwhile, visited Brunei Darussalam on Monday before going to Malaysia and Indonesia, who are seeking an urgent meeting of Southeast Asia’s ASEAN regional grouping, of which Myanmar is a member.

Singapore’s deputy prime minister Heng Swee Keat told an investors conference that his country – which has deep economic ties with Myanmar – was “appalled by the violent crackdowns against civilians” and called for a return to the democratic transition.

The BBC said one of its reporters in Myanmar who was detained by plainclothes men three days ago had been freed. Aung Thura of the BBC’s Burmese service was picked up on Friday along with a journalist who works for the domestic Mizzima news service.

There was no word on the whereabouts of the Mizzima reporter.