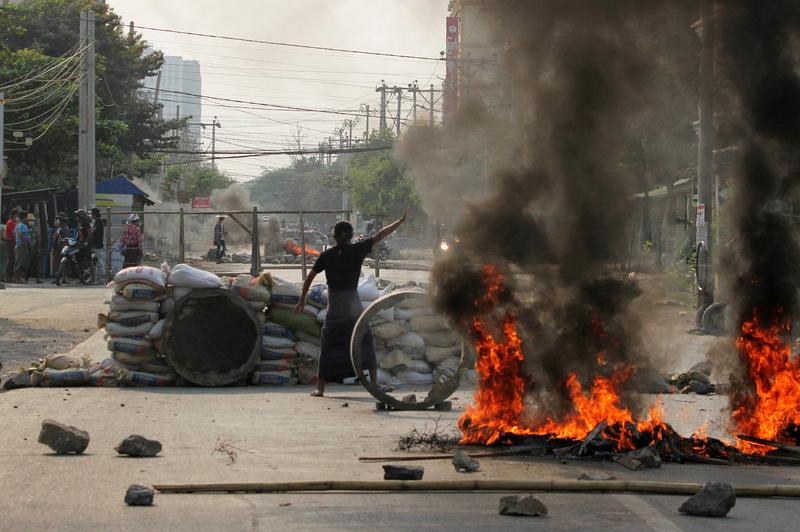 (Reuters) – The European Union prepared to impose sanctions on 11 people linked to last month’s military coup in Myanmar on Monday as the number of killings of pro-democracy demonstrators by security forces reached what Germany’s foreign minister called “an unbearable extent”.

At least 250 people have been killed so far in the crackdown on the protests, according to figures from the Assistance Association for Political Prisoners (AAPP) activist group.

Three people were killed in Myanmar’s second city, Mandalay in renewed unrest on Monday, including a 15-year-old boy, witnesses and news reports said.

“The number of murders has reached an unbearable extent, which is why we will not be able to avoid imposing sanctions,” German Foreign Minister Heiko Maas told reporters as he arrived in Brussels for a meeting with his EU counterparts.

The sanctions will be the EU’s most significant response to the events in Myanmar so far. The names of the 11 people involved in the coup and repression of demonstrators will be made public after the meeting.

According to diplomats and documents seen by Reuters last week, the EU is also planning to target companies “generating revenue for, or providing financial support to, the Myanmar Armed Forces”.

“We don’t intend to punish the people of Myanmar but those who blatantly violate human rights,” Maas said.

The military is heavily involved in business. Its conglomerates include Myanmar Economic Holdings Limited (MEHL) and Myanmar Economic Corporation (MEC) which are spread throughout the economy from mining and manufacturing to food and beverages to hotels, telecoms and banking.

The new sanctions are expected to bar EU investors and banks from doing business with them. They follow a U.S. decision last month to target the military and its business interests.

Myanmar has been locked in crisis since the elected government led by Nobel peace laureate Aung San Suu Kyi was overthrown by the military on Feb 1.

The junta says a Nov. 8 election won by Suu Kyi’s party was fraudulent, an accusation rejected by the electoral commission. Military leaders have promised a new election but have not set a date.

Suu Kyi and other figures in her National League for Democracy being held in detention while an array of accusations, have been levelled at her, including bribery. Her lawyer says the charges are trumped up.

In the latest violence, three people were killed in Mandalay, witnesses and the Myanmar Now news portal said.

Tun Tun Aung, a 15-year-old, was killed in his hut when security forces opened fire in the Mya Yi Nandar area of the city, his sister said.

“My brother was sitting next to the window,” she said. “We live in the squatters area. Our house is not strong enough to stop bullets.”

Six people were killed and several wounded in the city on Sunday, Myanmar Now reported.

State media said on Sunday that men on motorcycles attacked a member of the security forces who later died. The military said two policemen were killed in earlier protests.

The weeks of violence haves forced many citizens to think up novel ways to protest.

In a patch of woodland in western Mon State, trees have been decorated with condoms and portraits of the junta leader with a sign saying “Min Aung Hlaing’s father should have used a condom”.

Motorists honked car horns in downtown areas of the commercial capital Yangon in a sign of protest.

In the western town of Mindat in Chin state, protesters planted scores of posters in a square in front of the main market saying “Military dictatorship must fail”.

Asian neighbours, who have for years avoided criticising each other, have begun speaking out.

Singapore Foreign Minister Vivian Balakrishnan visited Brunei Darussalam on Monday before going to Malaysia and Indonesia, which are seeking an urgent meeting of Southeast Asia’s ASEAN regional grouping, of which Myanmar is a member.

Brunei is the current chair of the 10-member group.

Heng Swee Keat, deputy prime minister of Singapore, told an investors conference that his country was “appalled by the violent crackdowns against civilians” and called for a return to the democratic transition.

The island state, which has deep economic ties with Myanmar, has previously called the military action a “national shame”.

The BBC said on Monday that one of its reporters in Myanmar who was detained by plainclothes men three days ago had been freed. Aung Thura, from the BBC’s Burmese service, was detained on Friday along with a journalist who works for the domestic Mizzima news service.

There was no immediate word on the whereabouts of the Mizzima reporter.

Australian media reported that two Australian business consultants were detained as they tried to leave Myanmar, but it was not clear why. An Australian foreign ministry spokesperson said it was providing consular assistance but declined to comment further for privacy reasons.

Sean Turnell, an Australian economic adviser to deposed leader Suu Kyi, was detained last month. The army has not announced any charges against Turnell, who is among nearly 2,000 people the AAPP says have been detained since the coup.

“Every day I imagine the moment my phone rings and you are at the other end of the line, telling me you are your way home,” Turnell’s wife Ha Vu wrote on her Facebook page on Monday.

“I pray for that day to be soon. In the meantime, I irrevocably believe that you are still treated well, with dignity and respect.”