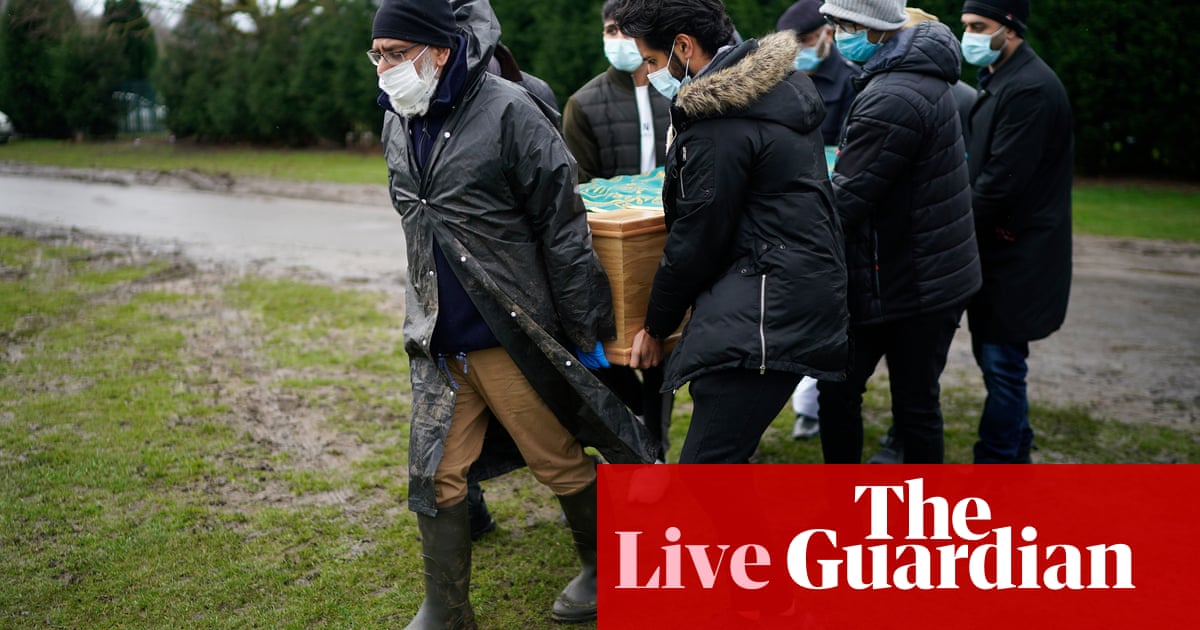 A public inquiry into the Scottish government’s handling of the pandemic will include families who have lost loved ones, Robert Booth reports.

Denmark’s government has said it plans to further ease Covid-19 curbs by letting hairdressers, spas and other services reopen and for more students to resume in-person classes from 6 April.

Many of the planned reopening schemes are contingent on the use of a so-called corona-passport, which shows whether the holder has been vaccinated, has previously been infected or has taken a test within the last 72 hours.

A French medical leader has warned that Covid-19 infections are rising at a “vertiginous rate” and if the situation does not improve, further lockdown measures may be needed.

“The epidemic is gathering pace, and the figures are exploding,” Frederic Valletoux, president of the French hospital federation and mayor of Fontainebleau, told LCI TV.

Official data published on Monday showed that the tally of new COVID-19 cases in France had accelerated further despite the start of a third lockdown over the weekend, with the number of people in intensive care at a new four-month high.

The eastern Indian state of Odisha may have to stop its coronavirus immunisation drive for four days due to a shortage of vaccine doses.

In a letter to the Indian Ministry of Health and Family Welfare dated 22 March, P.K. Mohapatra, Odisha’s additional chief secretary for health, warned the state only had enough doses to run its vaccination drive until 30 March. It is expecting another batch of the AstraZeneca vaccine, locally known as Covishield, only on 2 April.

As India battles a second surge in coronavirus infections that has lifted its case load to 11.69 million, many states have asked the government to replenish vaccine stocks so that they can cover more people faster. India has reported the third-highest total of coronavirus infections after the United States and Brazil.

Results from a US trial of AstraZeneca’s COVID-19 vaccine may have used “outdated information” on its efficacy.

The Data and Safety Monitoring Board said in a statement that it was concerned that AstraZeneca may have provided an incomplete view of the efficacy data.

AstraZeneca reported Monday that its Covid-19 vaccine provided strong protection among adults of all ages in a long-anticipated US study, a finding that could help rebuild public confidence in the shot around the world and move it a step closer to clearance in the US.

The company aims to file an application with the Food and Drug Administration in the coming weeks, and the government’s outside advisers will publicly debate the evidence before the agency makes a decision.

The Czech Republic has announced that total Covid-19 deaths have passed 25,000.

The country of 10.7 million has one of world’s highest per capita death tolls according to the Our World in Data website. It said the overall figure had risen to 25,055.

Its death toll from the virus has more than doubled since the start of 2021.

The World Health Organization is calling for Covid-19 vaccine manufacturers to follow AstraZeneca’s lead and share their technology to reduce vaccine inequity.

AstraZeneca’s shot, which new US data on Monday showed was safe and effective despite some countries suspending inoculations over health concerns, is being produced in various locations including South Korea’s SKBioScience and the Serum Institute of India.

WHO director general Tedros Adhanom Ghebreyesus called for more manufacturers to adopt this model to boost supplies, including for the Covax vaccine sharing programme seeking to speed more shots to developing countries.

“The gap between number of vaccines administered in rich countries and the number administered through Covax is growing and becoming more grotesque every day,” Tedros told a news conference.

“The inequitable distribution of vaccines is not just a moral outrage. It’s also economically and epidemiologically self-defeating.”

Ukraine has registered a record daily high of 333 coronavirus-related deaths over the past 24 hours following 17 March’s previous high of 289 deaths.

The former Soviet republic of 41 million people has been hit by a sharp increase in coronavirus cases in recent weeks that prime minister Denys Shmygal has said is the third wave of the pandemic.

Last week, new coronavirus infections spiked to 15,850 cases, the highest level in the Ukraine since November, prompting the capital Kyiv and several regions to impose a tight lockdown.

Rachel Hall here taking over for the morning – please do send over any thoughts, tips or ideas to rachel.hall@theguardian.com, I’d love to hear them.

That’s it from me, Helen Sullivan, for today. Thanks for following along – my brilliant colleague Rachel Hall will take you through the next while as the UK marks one year since the first Covid lockdown.

Here are the key developments from the last few hours:

Here is the full statement from the US National Institute of Allergy and Infectious Diseases on the AstraZeneca trial:

Late Monday, the Data and Safety Monitoring Board (DSMB) notified NIAID, BARDA, and AstraZeneca that it was concerned by information released by AstraZeneca on initial data from its Covid-19 vaccine clinical trial. The DSMB expressed concern that AstraZeneca may have included outdated information from that trial, which may have provided an incomplete view of the efficacy data. We urge the company to work with the DSMB to review the efficacy data and ensure the most accurate, up-to-date efficacy data be made public as quickly as possible.

Authorisation and guidelines for use of the vaccine in the United States will be determined by the Food and Drug Administration and Centers for Disease Control and Prevention after thorough review of the data by independent advisory committees.

British drugmaker AstraZeneca Plc may have provided an incomplete view of efficacy data on its Covid-19 vaccine from a large scale US trial, the US National Institute of Allergy and Infectious Diseases (NIAID) said on Tuesday.

AstraZeneca said a day earlier that its Covid-19 vaccine developed with Oxford University was 79% effective in preventing symptomatic illness in a large trial in Chile, Peru and the United States.

“The DSMB expressed concern that AstraZeneca may have included outdated information from that trial, which may have provided an incomplete view of the efficacy data,” the US agency said, referring to the independent Data Safety Monitoring Board (DSMB).

“We urge the company to work with the DSMB to review the efficacy data and ensure the most accurate, up-to-date efficacy data be made public as quickly as possible.”

A year to the day since the UK went into a historic lockdown to combat a frightening and deadly new pandemic, the nation looks back in disbelief and horror. One hundred and twenty six thousand dead. A decimated economy. The reckoning will take decades to pick over.

Tuesday’s day of reflection, organised by the cancer charity Marie Curie and backed by over 110 organisations, will be observed across the nation. A minute’s silence at midday is followed by a doorstep vigil at 8pm. Boris Johnson, Keir Starmer, Nicola Sturgeon and Mark Drakeford are expected to mark the occasion. Prominent buildings and national landmarks will be illuminated in yellow, to commemorate the dead.

For the families and friends bereaved by Covid-19, it is a day to quietly contemplate those they have lost. For long Covid survivors, it is a reminder the vaccine-enabled relaxing of restrictions will not do much for the bodies they are trapped in that do not work like they used to. For everyone else, it is a day to take stock. So many taken before their time.

‘I’ve lost who I was’: UK pauses to reflect on year of Covid

People will be allowed to leave the UK to prepare a second home for sale or rent, according to new coronavirus regulations coming into force later this month.

The latest restrictions, which will apply from 29 March, will include a list of specific “reasonable excuses to travel” outside the country, including what Labour branded as “the Stanley Johnson clause”.

The exemption allows people to travel abroad “in connection with the purchase, sale, letting or rental of a residential property”. Those activities include visiting an estate agent, developer sales office or show home, viewing residential properties to rent or buy, and preparing a property for moving in.

Other exemptions include study or competing in an elite sporting event:

Podcast: Covid-19: what happens next

On 23 March 2020, the UK prime minister, Boris Johnson, announced the first lockdown in response to the growing number of cases of Covid-19. At the same time, countries around the world began to close their schools, restaurants, and offices and ask citizens to physically distance from one another. In the 12 months since, more than 2 million people have died, viral variants have emerged, and we have developed safe and effective vaccines.

One year into the pandemic, Science Weekly is asking: what happens next? Ian Sample talks to the professors Martin Landray, Mike Tildesley, and Deborah Dunn-Walters about Covid treatments, vaccines and what the next 12 months may hold:

Covid-19: what happens next? – podcast

More on a year since the UK’s first lockdown, via AFP:

On Tuesday, Johnson said the year that followed had “taken a huge toll on us all” and called the anniversary “an opportunity to reflect on the past year – one of the most difficult in our country’s history”.

“We should also remember the great spirit shown by our nation over this past year,” he added.

Britain recorded its first coronavirus death on March 5, 2020, but was criticised for its light-touch approach to containing the spread compared to more stringent measures elsewhere.

The prime minister had promised to “turn the tide” of the outbreak within 12 weeks of the initial lockdown.

But a year later, Britain is now in its third national lockdown, having recently been hit by its latest and deadliest wave.

Schools have been closed, as have pubs, bars, nightclubs, theatres, cafes, and leisure centres, and mass gatherings have been banned.

However, restrictions are being loosened as the country’s mass vaccination rollout drives down hospitalisations and deaths, with the government eyeing a return to normality by June 21.

The prime minister himself required treatment in intensive care after catching the virus shortly after announcing the first lockdown.

Johnson was in an ICU for three days and given oxygen, requiring Foreign Minister Dominic Raab to take over for three weeks during the darkest days of the first wave.

Prince Charles, heir to the British throne, also caught the disease early in the pandemic, but said he “got away with it quite lightly”, recovering over seven days at his Birkhall home on the royal Balmoral estate.

Britain on Tuesday marks the anniversary of its first coronavirus lockdown with a “National Day of Reflection”, which will see parliament hold a minute’s silence in tribute to the more than 126,000 people who have died, AFP reports.

“A year on, it is right that we take a moment to reflect on what we as a nation have been through,” said Lindsay Hoyle, Speaker of the House of Commons.

“None of us has escaped the ordeal of Covid-19 – from the shock of having our liberty taken away, to the heartbreak of losing someone we loved,” he added.

Lawmakers from both the House of Commons and the House of Lords will fall silent to pay tribute to “the many lives lost and the families that mourn them” and to thank frontline health workers.

“From this evening, I must give the British people a very simple instruction – you must stay at home,” Johnson told the nation a year ago.

“Because the critical thing we must do is stop the disease spreading between households.”

Justifying his action at the time, the British leader called the pandemic “the biggest threat this country has faced for decades” and said the state-run National Health Service (NHS) would be unable to cope without radical measures.