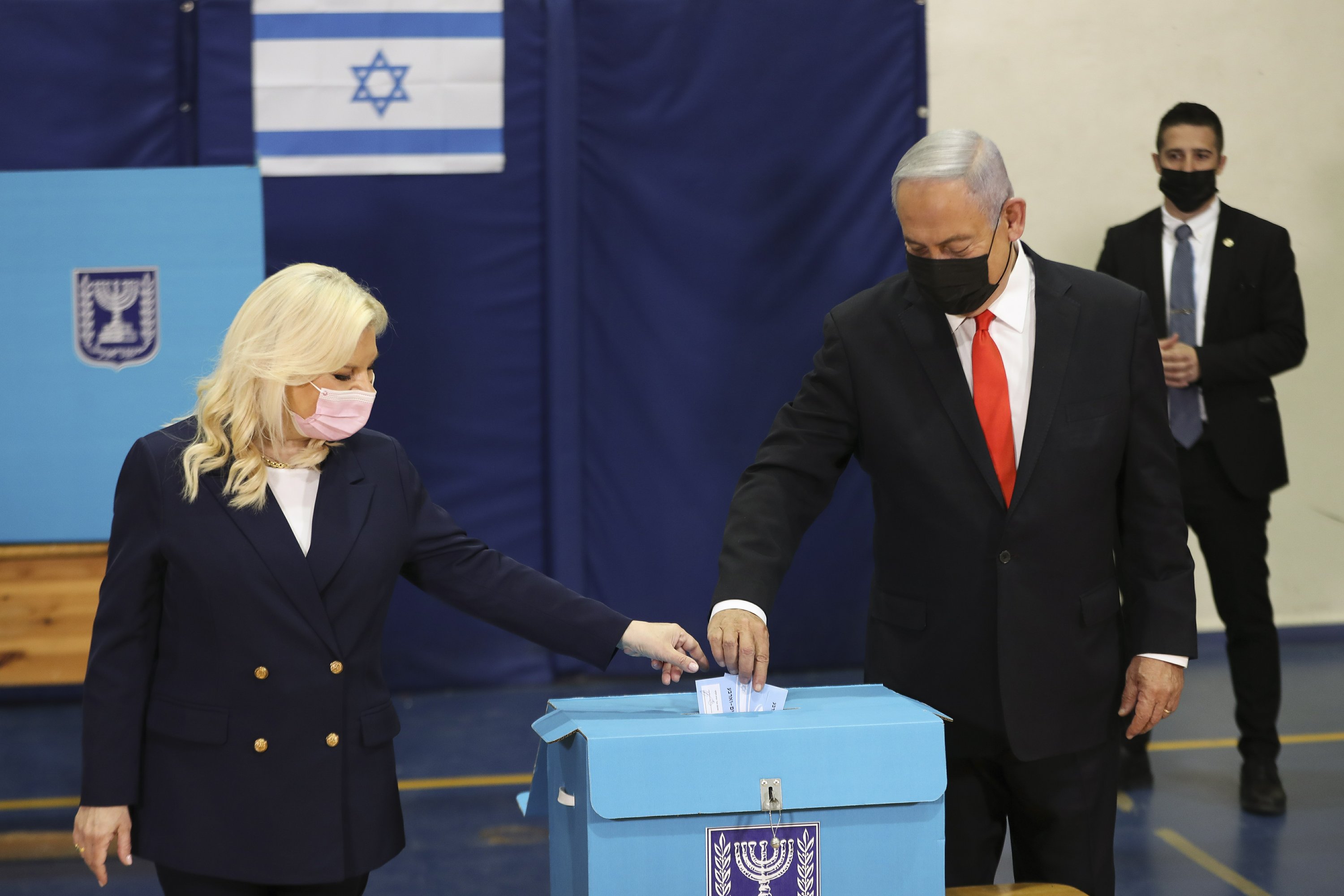 The polls on Israel’s three main TV stations showed Netanyahu and his religious and nationalist allies, as well as diverse array of opponents, both falling short of a parliamentary majority. That could set the stage for weeks of paralysis and even an unprecedented fifth consecutive election. Exit polls are often imprecise and the official results may not be known for days.

The exit polls conducted by Channels 11, 12 and 13 were nearly identical, showing Netanyahu and his allies with 53-54 seats in the 120-seat Knesset, Israel’s parliament. His opponents were projected to win 59, and Naftali Bennett’s Yamina party was projected to win 7-8.

If the final results are in line with the exit polls, both sides will have to court Bennett, a former Netanyahu ally with strained relations with the prime minister, to form a majority of at least 61 seats.

Bennett shares Netanyahu’s hard-line nationalist ideology but has signaled he would be open to cooperating with his rivals if given the chance to be prime minister.

The election is widely seen as a referendum on Netanyahu’s divisive rule, and once again, opinion polls had forecast an extremely tight race.

The three-month campaign was largely devoid of substantive issues and focused heavily on Netanyahu’s personality and whether he should remain in office. In contrast to past elections where he faced off against a clear rival, this time a diverse array of parties is trying to topple him, having little in common beyond their shared animosity toward him.

Netanyahu, 71, who even after 12 years in office remains a tireless campaigner, continued throughout the day. At one point, he marched along a Mediterranean beach imploring people over a megaphone to go vote.

“This is the moment of truth for the state of Israel,” said one of his challengers, opposition leader Yair Lapid, as he voted in Tel Aviv.

Netanyahu has emphasized Israel’s highly successful coronavirus vaccination campaign. He moved aggressively to secure enough vaccines for Israel’s 9.3 million people, and in three months the country has vaccinated some 80% of its adult population. That has enabled the government to open restaurants, stores and the airport just in time for election day.

He also has tried to portray himself as a global statesman, pointing to the four diplomatic accords he reached with Arab countries last year. Those agreements were brokered by his close ally, then-President Donald Trump.

Netanyahu’s opponents, including a trio of former aides who share his nationalistic ideology but object to what they say is his autocratic leadership style, see things far differently.

They say that Netanyahu bungled many aspects of the pandemic, particularly by allowing his ultra-Orthodox allies to ignore lockdown rules and fuel a high infection rate for much of the year. Over 6,000 Israelis have died from COVID-19, and the economy remains in weak shape with double-digit unemployment.

Even Netanyahu’s reputation as a statesman has suffered a bit in recent days. The United Arab Emirates, the most important of the four Arab nations to establish official diplomatic ties with Israel, last week made clear that it did not want to be used as part of Netanyahu’s re-election bid after he was forced to call off a visit to the country. The Biden administration also has kept its distance, a contrast to the support he received in past elections from Trump.

In a reminder of the country’s many security challenges, Palestinian militants in the Gaza Strip fired a rocket into Israel late Tuesday, setting off air raid sirens in southern Israel. The Israeli military said the rocket landed in an open space.

Opinion polls forecast a tight race, with a possibility of both Netanyahu and his opponents falling short of securing a parliamentary majority yet again. That could plunge the country into an unprecedented fifth consecutive election later this year.

“It would be better if we didn’t have to vote, you know, four times in two years,” said Jerusalem voter Bruce Rosen. “It’s a little bit tiring.”

By 6 p.m. (1600 GMT), 51.5% of eligible voters had cast ballots, a drop of nearly 5 percentage points from the previous election a year ago, the Israeli election commission announced.

This time, much will depend on the performance of a handful of small parties struggling to win the minimum 3.25% of the vote to enter the 120-seat Knesset, or parliament.

While Netanyahu’s Likud was expected to emerge as the largest single party, no party has ever won a 61-seat majority on its own. Both he and his rivals must win the support of smaller allied parties to form a majority coalition.

Recent polls have forecast that several parties were hovering near the electoral threshold. A failure by any one of them to enter the parliament would have a significant impact on the balance between Netanyahu and his opponents.

Another complicating factor was absentee balloting. Up to 15% of the electorate was expected to vote outside their home districts, a larger-than-usual number due to special accommodations for those with COVID-19 or in quarantine. The government set up special polling stations and even brought ballot boxes to hospital bedsides to allow people to vote safely.

Those votes are tallied separately in Jerusalem, meaning final results may not be known for days. Given the tight race, it could be difficult to predict the outcome before the final count is complete.

He will hold a series of meetings with party leaders and then choose the one he believes has the best chance of forming a government as his prime minister-designate. That task is usually, but not always, given to the head of the largest party. That will set off weeks of horse-trading as the prime minister-designate tries to cobble together a government with promises of generous budgets and powerful ministries to his would-be partners.

“Four elections in two years erode public trust in the democratic process,” he said, even as he urged Israelis to vote again. “There is no other way.”