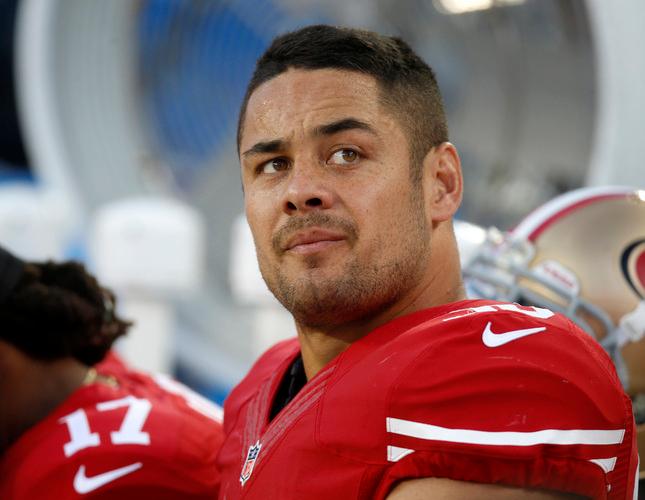 Jarryd Hayne, who dodged charges for a San Jose rape accusation from his 49ers stint in 2015, has been found guilty of sexually assaulting a woman in his native Australia.

A jury Monday found Hayne, 33, guilty of two counts of sexual intercourse without consent in a 2018 incident with a 26-year-old woman at her home.

Hayne was an Australian rugby-league superstar before pursuing an unlikely and ultimately short-lived NFL career with the 49ers. Off-field incidents in recent years tainted his image, and he now faces up to 14 years in jail.

He was granted $50,000 bail ahead of what a judge termed an “inevitable” jail sentence, which won’t be handed down until May; Hayne vowed to appeal Monday’s verdict.

“I’d rather go to jail knowing I spoke the truth than be a free man living a lie. I was straight up from the start,” Hayne told reporters as he left court, the Sydney Morning Herald reported. “It’s unfortunate, it’s disappointing, but at the end of the day they’ve come to a decision, I respect that.”

Hayne made a captivating trek onto the 49ers’ roster in 2015. His story about switching pro sports, and doing so with athletic flair, made him a summer sensation during the NFL’s otherwise bland preseason. But he promptly failed as a fumble-prone punt returner and novice running back as the 49ers’ season began, getting him demoted to the practice squad in November before a late-season cameo.

His NFL career, albeit brief, enraptured Australians who’d fawned over him as a rugby-league MVP and champion. Then came his abrupt retirement from the NFL in May 2016. He wasn’t expected to make the 49ers’ roster under new coach Chip Kelly, and he sought a spot on Fiji’s Olympic rugby team.

It wasn’t long before a rape allegation surfaced from a San Jose woman, who’d met Hayne at a bar after a 49ers game and returned to his house.

San Jose police investigated that rape allegation, and the Santa Clara County District Attorney’s Office declined to charge Hayne in October 2016, citing insufficient evidence. In December, the accuser filed a civil suit in federal court and Hayne reached a settlement in 2019 with his alleged victim, reportedly for $100,000.

In the 2018 case that led to Monday’s sexual assault conviction, Hayne’s victim stated in court documents that she refused to consent to sex because Hayne had a taxi waiting outside to take him back to Sydney after a bachelor party excursion, according to FoxSports.com. He forcibly performed sex acts on her after that refusal, she testified.

Hayne has not been out of professional sports since then. He left court Monday with his wife of two months, Amellia Bonnici.