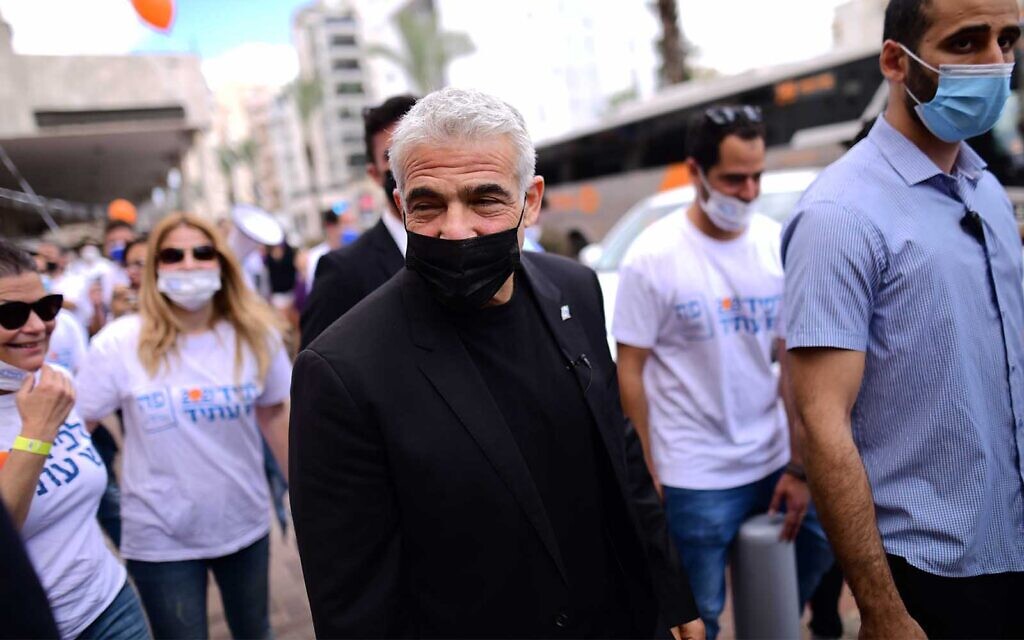 A man was arrested and taken for questioning on suspicion of planning to murder Yesh Atid party chairman Yair Lapid, police said Monday.

Police said the suspect from the city of Beit Shemesh posted threats against Lapid online that said he will murder the opposition leader even if he is jailed for it.

An investigation concluded that the 30-year-old was abroad at the time of the online threats.

The suspect made the threats in a social media comment, police said, without identifying which social media platform he made the comments on or where he had been abroad.

Thousands of Israelis were stranded abroad by coronavirus restrictions in recent months, but the government has been gradually rolling back entry restrictions, partially to allow voting in Tuesday’s election.

The suspect will be transferred to Jerusalem for police questioning, and on Tuesday will be brought to the Jerusalem Magistrate’s Court, where police are expected to request an extension of his detention.

“No one is going to scare us. The culture of hatred, division, and incitement will be replaced by a sane government that will unify all Israeli citizens. It all depends on you. Go vote and and let sanity triumph,” Lapid said in response to the police report.

Prime Minister Benjamin Netanyahu has campaigned relentlessly against Lapid and sought to make the centrist politician the face of all parties opposed to him, including his right-wing rivals Gideon Sa’ar of New Hope and Naftali Bennett of Yamina.

There have been a series of violent incidents in recent weeks, mainly between Netanyahu supporters and his opponents, as the heat turns up ahead of the election.

Critics have long accused the premier of inciting against his rivals and their supporters, including in recent weeks.

Sa’ar blamed the premier for the violence, saying, “Netanyahu crossed a red line.”

“Violence erodes the foundations of democracy. You were silent in the face of this violence against [assassinated prime minister Yitzhak] Rabin and we all know how this ends. This violence won’t intimidate us,” she said in a video statement.

A number of violent incidents toward demonstrators have also been reported at anti-Netanyahu rallies over the last few months.

Netanyahu has also accused activists against him of threatening himself and his family.

Last year, several men were arrested for online threats against Netanyahu and other public figures.

Israelis head to the polls for the fourth time in two years on Tuesday, in an election that is largely seen as a referendum on the long-serving Netanyahu, his criminal trial, and his government’s handling of the pandemic.

Sorgente articolo:
Man arrested at airport after threatening to murder Yair Lapid – The Times of Israel