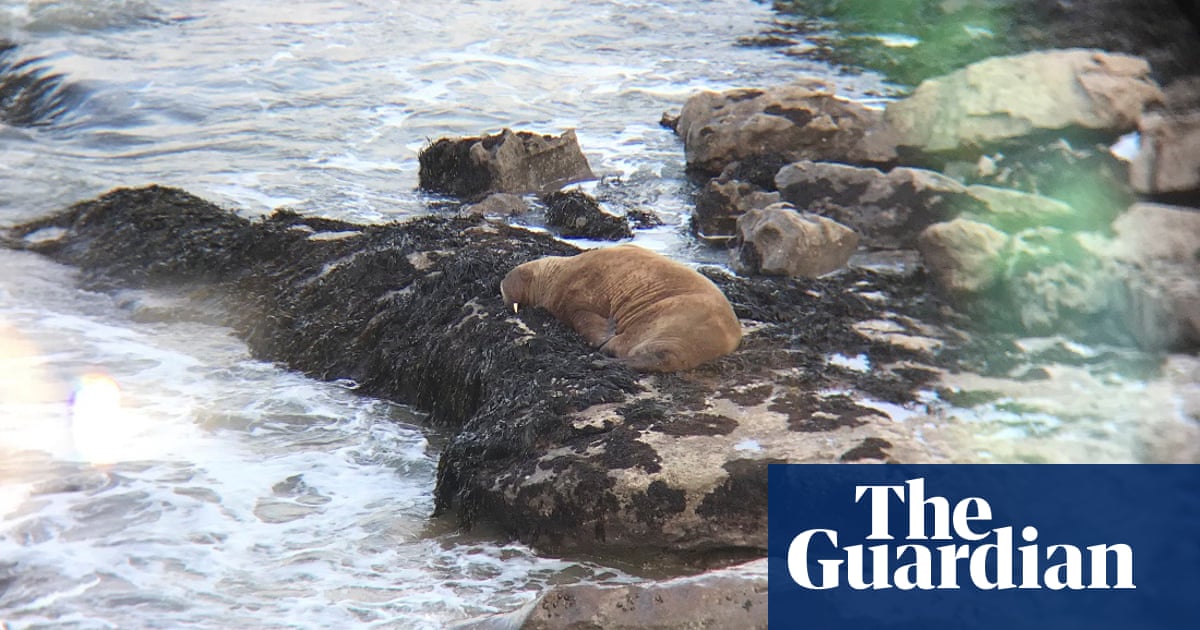 It could have been the incongruity of the walrus turning up on the Welsh coast. Or perhaps it was the discovery that the creature appeared to be on something of a tour of the British and Irish Isles while the human population remained in lockdown, their own chances of a foreign getaway shrinking daily. Maybe it was simply a sense of connection: the lost, lumbering beast a reflection of a nation at sea amid the waves of Covid.

Whatever the reason, the juvenile Atlantic walrus spotted off the Pembrokeshire coast has become something of a celebrity, with some suggesting it should be called “Wally”.

“It probably is either from the east coast of Greenland or from Svalbard, one of those stocks,” said Lucy Babey, the head of science and conservation at the marine conservation charity Orca.

Babey said that while it was not yet certain whether the walrus spotted in Wales is the same mammal that was sighted the week before on rocks in County Kerry, Ireland, it is likely.

But the Irish Whale and Dolphin Group say it’s a match. “The IWDG can confirm it is the same animal due to the white markings on its left flipper and tusk length,” they tweeted, adding that would mean the walrus has travelled 450km (280 miles) in six days.

Quite why the walrus ended up so far south remains a mystery. While some suggest the animal could have floated on ice, Babey said the animal could simply have been searching for food, or become disturbed, for example by noise, and sent off course.

It is not the first walrus to turn up unexpectedly – although sightings around the British and Irish Isles are rare. “Since 1979 there have been eight confirmed sightings of walruses in Ireland,” said Babey, adding they have also turned up in Scotland. “There was one in 2018 that was seen up there on the various islands, travelling around for several months.”

But while penguins found on the beaches of Brazil have been airlifted to cooler waters, Babey said it would be unwise to attempt such a mission with a walrus, noting the animal was huge and would have to be sedated because of the stress such a procedure would cause. “What’s happened in the past is just keeping an eye on them and the animals have just sort of disappeared – so you hope that they swim on and find the correct place,” she said.

Richard Sabin, the principal curator of mammals at the Natural History Museum, said walruses were not the only Arctic animals that have been found taking the odd excursion: in 1949 two narwhals, creatures often called unicorns of the sea, were found in the Thames and Medway, while in 2018 a beluga whale turned up off Gravesend in Kent.

The beluga whale “is an Arctic species that, like the walrus, has got a fairly broad diet and like the walrus it will tend to go where its food is”, he said.

Chiara Giulia Bertulli , a sightings officer at Sea Watch Foundation, added that beluga and bowhead whales are two Arctic species that have appeared in the charity’s national sightings database, with the latter being reported in 2015 around the Isles of Scilly and again in 2016, this time off Mount’s Bay in Cornwall and Carlingford Lough in Ireland.

Bowhead whales have since been reported off the coast of countries including France, Belgium and the Netherlands. “The European sightings could all represent the same lone individual,” said Bertulli.

Sabin said: “An increase in population size because of the absence of commercial exploitation could be one of the reasons why we are seeing these animals appear outside their usual range.”

He added that instances of Arctic visitors should be carefully monitored, noting they do not appear to be becoming more common per se, although sightings might now be more frequently reported because of the growth of formal sightings surveys. However he said they should also be enjoyed – albeit from afar.

Babey agreed, noting the young walrus seen in Wales was about the size of a cow.

“Do not approach the animal. Keep a really safe distance. They are very, very sensitive,” she said. “This animal is going to be pretty exhausted from all of its swimming. It is probably going to be stressed out as it is not in an environment it is used to.”

Sorgente articolo:
Mystery of the walrus spotted on rocks on the Welsh coast – The Guardian